Mobbing in animals is an antipredator behavior which occurs when individuals of a certain species mob a predator by cooperatively attacking or harassing it, usually to protect their offspring. A simple definition of mobbing is an assemblage of individuals around a potentially dangerous predator.[1] This is most frequently seen in avian species, though it is also known to occur in many other animals such as the Meerkat. While mobbing has evolved independently in many species, it only tends to be present in those whose young are frequently preyed upon. This behavior may complement cryptic adaptations in the offspring themselves, such as camouflage and hiding. Mobbing calls may be used to summon nearby individuals to cooperate in the attack.

Konrad Lorenz, in his book entitled On Aggression (1966), first described mobbing among birds and animals, attributing it to instincts rooted in the Darwinian struggle to survive. In his view, we humans are subject to similar innate impulses but capable of bringing them under rational control (see mobbing).[2] 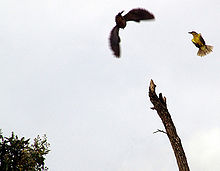 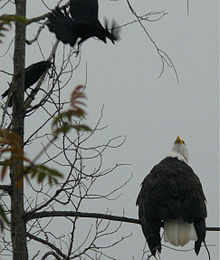 Birds that breed in colonies such as gulls are widely seen to attack intruders, including encroaching humans.[3] The birds that most frequently engage in mobbing include mockingbirds, jays, chickadees, and blackbirds. Through mobbing, mockingbirds can effectively force a cat or dog to seek something less troublesome. One mockingbird might fly in front of the cat or dog, enticing a common predator upon birds to lunge, while another pecks at the cat or dog from behind to inflict a sharp pain that forces the predator to hesitate when it encounters mockingbirds.[citation needed] Behavior includes flying about the intruder, dive bombing, loud squawking and defecating on the predator. Mobbing can also be used to drive larger birds and mammals away from a food source. One bird might distract while others quickly steal food. A flock of birds might drive a powerful animal away from food. Costs of mobbing behavior include the risk of engaging with predators, as well as energy expended in the process. Black-headed Gulls are one species which aggressively engages intruding predators, such as Carrion Crows. Classic experiments on this species by Hans Kruuk involved placing hen eggs at intervals from a nesting colony, and recording the percentage of successful predation events as well as the probability of the crow being subjected to mobbing.[4] The results showed decreasing mobbing with increased distance from the nest, which was correlated with increased predation success. Mobbing may function by reducing the predator's ability to locate nests (as a distraction) since predators cannot focus on locating eggs while they are under attack.

Besides the ability to drive the predator away, mobbing also draws attention to the predator, making stealth attacks impossible. Mobbing plays a critical role in the identification of predators and inter-generational learning about predator identification. Reintroduction of species is often unsuccessful, because the established population lacks this cultural knowledge of how to identify local predators. Scientists are exploring ways to train populations to identify and respond to predators before releasing them into the wild.[5]

Adaptationist hypotheses regarding why an organism should engage in such risky behavior have been suggested by Eberhard Curio,[6] including advertising their physical fitness and hence uncatchability (much like stotting behavior in gazelles), distracting predators from finding their offspring, warning their offspring, luring the predator away, allowing offspring to learn to recognize the predator species,[7] directly injuring the predator or attracting a predator of the predator itself. The much lower frequency of attacks between nesting seasons suggests such behavior may have evolved due to its benefit for the mobber's young. Niko Tinbergen argued that the mobbing was a source of confusion to gull chick predators, distracting them from searching for prey .[8] Indeed, an intruding carrion crow can only avoid incoming attacks by facing its attackers, which prevents it from locating its target.[3]

Besides experimental research, the comparative method can also be employed to investigate hypotheses such as those given by Curio above. For example, closely related species such as the Kittiwake do not show mobbing behavior. The kittiwake's cliff nests are almost completely inaccessible to possible predators due to gusty winds and sheer cliffs, meaning its young are not at risk to predation like the Black-headed Gull.[9] This is an example of an evolutionary pattern known as divergent evolution.

Mobbing is thought to carry risks to roosting predators, including potential harm from the mobbing birds, or attracting larger, more dangerous predators. Birds at risk of mobbing such as owls have cryptic plumage and hidden roosts to reduce this danger.[10] 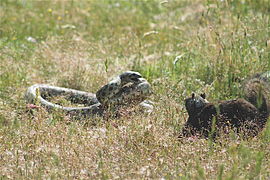 The occurrence of mobbing behavior across widely different taxa, including California Ground Squirrels, is evidence of convergent evolution.

Another way the comparative method can be used here is by comparing gulls with distantly related organisms. This approach relies on the existence of convergent evolution, where distantly related organisms evolve the same trait due to similar selection pressures. As mentioned, many bird species such as the swallows also show mobbing of predators, however even more distantly related species including mammals have been known to engage in this behavior. One example is California ground squirrels, which are known to distract predators such as the rattlesnake and gopher snake from locating their nest burrows by kicking sand into their eyes.[11] This social species also uses alarm calls.

Mobbing has also been observed in fish. For example, bluegills have been seen to attack snapping turtles.[1] Bluegills, which form large nesting colonies, were seen to attack both released and naturally occurring turtles, which may function to advertise their presence, drive the predator from the area, or aid in cultural transmission of predator recognition.

The Great Tit, a passerine bird, employs both mobbing behavior and alarm calls.

Mobbing calls are signals made by the mobbing species while harassing a predator. These differ from alarm calls, which allow con-specifics to escape from the predator. The Great Tit, a European songbird uses such a signal to call on nearby birds to harass a perched bird of prey, such as an owl. This call occurs in the 4.5kHz range,[3] and is effective in traveling long distances. However, when their prey are in flight, they employ an alarm signal in the 7–8 kHz range. This call is less effective at travelling great distances, but is much more difficult for both owls and hawks to hear (and detect the direction from which the call came).[12] In the case of the alarm call, it is disadvantageous to the sender if the predator picks up on the signal, hence selection has favored those birds able to hear and employ calls in this higher frequency range.

Mobbing calls may also be part of an animal's arsenal in harassing the predator. Studies of Phainopepla mobbing calls indicate it may serve to enhance the swooping attack on the predators, including Scrub Jays. In this species, the mobbing call is smoothly upsweeping, and is made when swooping down in an arc beside the predator. This call was also heard during agonistic behavior interactions with conspecifics, and may serve additionally or alternatively as an alarm call to their mate.[13] 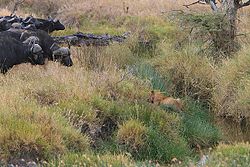 The evolution of mobbing behavior is explained using evolutionarily stable strategies, which are in turn based on game theory.[14]

By cooperating to successfully drive away predators all individuals involved increase their chances of survival and reproduction. An individual stands little chance against a larger predator, but when a large group is involved, the risk to each group member is minimized. By being in a large group, the risk for a particular individual is reduced or diluted. This so-called dilution effect proposed by W. D. Hamilton is another way of explaining the benefits of cooperation by selfish individuals. Lanchester's laws also provide an insight into the advantages of attacking in a large group rather than individually.[15][16]

Another interpretation involves the use of the handicap principle. Here the idea is that a mobbing bird, by apparently putting itself at risk, displays its status and health so as to be preferred by potential partners.[17]