After the theophany on Mount Sinai, in the Tabernacle—and afterwards in the Temple—only two altars were used: the Altar of Burnt Offering, and the Altar of Incense.

The first altar was the Altar of Burnt Offering (mizbach ha'olah) (Exodus 30:28), also called the Brasen Altar (Exodus 39:39), the Outer Altar (mizbach hachitzona), the Earthen Altar (mizbach adamah), the Great Altar (mizbach hagedola) and the Table of the Lord (Malachi 1:7) This was the outdoor altar and stood in the Court of the Priests, between the Temple and the Court of Israel, and upon which the korbanot (animal and bird sacrifices) were offered. The blood of the sacrifices would be thrown against the base of the altar (Exodus 29:12; Leviticus 4:18), and portions of the sacrifices would be burned on top of it (precisely which portions would depend upon the type of sacrifice). Also consumed at the altar would be some of the meat offerings, and the drink offerings (libations of wine) were poured out here. All sacrifices had to be "seasoned with salt" (Leviticus 2:13, Numbers 18:19)

Three separate piles of wood burned atop the altar. The largest of these was where all the portions of the sacrifices were burned; the second fire provided the coals for the Altar of Incense within the sanctuary, and the third was the "perpetual fire" which constantly burned on the altar. Nothing was placed on it, and no coals were taken from it. It existed solely to fulfill the commandment that there be a perpetual fire, as the Torah states: "And a fire shall burn there on the altar constantly; it shall not be extinguished" (Leviticus 6:5). There was no commandment regarding the type of wood to be used; however, the Rabbis forbade the use of olive wood and grape vine, as these would not burn well and needed to be conserved because of their commercial value to the people. Three particular types of wood were preferred: fig, walnut, and pine. These woods all burn well, and were therefore preferable. The choicest branches of fig were used for the second fire, the one from which coals were taken for the Altar of Incense. If all of the lamps of the menorah went out, they would have to be rekindled from the fire on the Altar of Burnt Offering.

A large pile of ashes was formed in the center of the altar from the remnants of the three fires.[2] A portion of the ashes from this pile were required to be removed every morning before the first sacrifice of the day. In the Second Temple, the priest who fulfilled this mitzvah (commandment) was chosen by lottery every morning. He would vest in his priestly vestments and wash his hands before approaching the altar. The ashes were taken up in a silver shovel and set on the ground to the east of the altar at what was called, "the place of the ashes." Then he would change from his priestly vetments into ordinary clothing and remove the ashes to a clean place outside the camp (Leviticus 6:10-11, Cf., 1:16).

In Exodus 27:3 the various utensils used with the altar are enumerated. They were made of brass. (Comp. 1 Samuel 2:13-14; Leviticus 16:12; Numbers 16:6-7). The altar could not be carved using utensils made of iron or of bronze (Exodus 20:25), nor were any allowed on or near it, because iron and bronze were used for implements of war. The Altar and its utensils were considered to be sacred, and the priests had to vest and wash their hands before touching them—even so much as removing the ashes from the altar.

According to the Bible, the fire on the altar was lit directly by the hand of God and was not permitted to go out (Leviticus 6:12-13). No strange fire could be placed upon the altar. The burnt offerings would remain on the altar throughout the night before they could be removed (Leviticus 6:9).

A second lottery would be made to determine which priests would fulfill the various duties involved in offering the sacrifice and preparing the menorah and the Golden Altar.

Model depiction of the Altar of Burnt Offerings in the Tabernacle.

The first altar of this type was made to be moved with the Children of Israel as they wandered through the wilderness. Its construction is described in Exodus 27:1-8. It was square, 5 cubits in length and in breadth, and 3 cubits in height. It was made of shittim wood, and was overlaid with brass. In each of its four corners projections, called "horns" (keranot), rose up. The altar was hollow, except for a mesh grate which was placed inside half way down, on which the wood sat for the burning of the sacrifices. The area under the grate was filled with earth. There were rings set on two opposite sides of the altar, through which poles could be placed for carrying it. These poles were also made of shittim wood and covered with brass.

When Moses consecrated the Tablernacle in the wilderness, he sprinkled the Altar of Burnt Offering with the anointing oil seven times (Leviticus 8:10-11), and purified it by anointing its four horns with the blood of a bullock offered as a sin-offering, "and poured the blood at the bottom of the altar and sanctified it, to make reconciliation upon it" (8:14-15).

The Kohathites were the Levites who were responsible for moving and setting up the altar. When it was time for the Israelites to move, they removed the ashes from the altar, and spread a purple cloth over it, placed all of the instruments and vessels used in the sacrifices on it, covered it with a blanket of badger skin, and put the carrying poles in place (Numbers 4:13-14).

According to the Bible, after the rebellion of Korah, the censers that were used by the rebels were made into broad plates used to cover the altar, as a warning that only priests of the seed of Aaron may offer incense before the Lord (Numbers 16:36-40).

In Solomon's temple the altar was of larger dimensions (2 Chronicles 4:1. Comp. 1 Kings 8:22, 8:64; 9:25), and was made wholly of brass, covering a structure of stone or earth. Because this altar was larger than the one used in the wilderness, it had a ramp leading up to it. A ramp was used because the use of steps to approach the altar was forbidden by the Torah: "Do not climb up to My altar with steps, so that your nakedness not be revealed on it" (Exodus 20:23). On the day of the consecration of the new temple, Solomon also sanctified a space in the center of the Court of the Priests for burnt offerings, because the brasen altar he made was not large enough to hold all of the offerings (2 Chronicles 7:7).

After their return from the Babylonian captivity it was re-erected (Ezra 3:3-6) where it had formerly stood. When Antiochus IV Epiphanes pillaged Jerusalem, he defiled the Altar of Burnt Offering by erecting a pagan altar upon it. Judas Maccabeus renewed the altar when he re-took Jerusalem. Since the existing altar had been defiled by the blood of pagan sacrifices the old stones of the altar were removed and replaced with new, unhewn ones. However, since the old stones had been previously sanctified by the Jewish sacrifices they could not be moved to an unclean place; so they remained on the Temple Mount, "until there should come a prophet to tell what to do with them." (1 Maccabees 4:41-47). 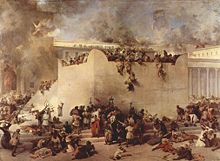 Destruction of the Temple of Jerusalem, by Francesco Hayez. This imaginative depiction centers on the Altar of Burnt Offerings.

During Herod the Great's extensive building activity on the Temple Mount, it was likely refurbushed. Talmudic scholars give a very precise description of the altar during the Second Temple period. The altar was built as a perfect square and was quite large: it reached a height of 10 cubits (app. 5 meters) and its width was 32 cubits (app. 16 meters). It was constructed of two main parts: the altar itself, and the ascent ramp. Both were constructed of stones and earth. On top of the altar at its four corners, there were hollow boxes which made small protrusions or "horns." These horns measured one cubit square and 5 handbreadths high, each (or, app. 18" x 18" x 15").[3] In this form, the altar remained in its place until the destruction of Jerusalem by the Romans in 70 A.D.

Today, in the Dome of the Rock, immediately underneath the great golden dome, which is believed to occupy the site of the old temple, there is a rough projection of the natural rock known as the Foundation Stone, measuring about 60 feet in its extreme length, 50 feet in its greatest breadth, and at its highest point about 4 feet above the pavement. This rock seems to have been left intact when Solomon's Temple was built, and may have been the site of the Altar of Burnt Offering, although a recent analysis suggests it may have been the floor of the Holy of Holies. Underneath this rock is a cave, known today as the Well of Souls, which may have been the granary of Araunah's threshing-floor (1 Chronicles 21:22).

The second altar was the Altar of Incense (mizbach haketoros) (Exodus 30:1-10), called also the Golden Altar (mizbach hazahav) (39:38; Numbers 4:11), and the Inner Altar (mizbach hap'nimi) stood inside, in the Holy Place "before the Veil that is by the Ark of the Covenant."

The altar was constructed of shittim wood and covered in pure gold. It was an upright rectangular stand, measuring one cubit wide, one cubit deep, and two cubits high, with a "horn" on each corner, a border of gold around the top, and rings on opposite sides through which poles could be passed to carry it (Exodus 37:25-26). The poles were made of shittim wood covered with gold. Moses consecrated the altar with the anointing oil when the Tabernacle was dedicated (Leviticus 40:9).

On this altar incense was burned daily at the time of the morning and the evening sacrifices. The coals used on this altar had to be taken from the Altar of Burnt Offerings. The incense used had to be made according to a specific formula (Exodus 30:34-35), and no other incense was permitted (Exodus 30:9). According to Jewish tradition, the incense was made by the Avtinas family, who closely guarded its secret. The offering of incense also had to be seasoned with salt.

Whenever certain sin-offerings were brought, the coals from the incense that was lit that morning were pushed aside and the blood of the "inner sin-offering" was sprinkled seven times on the top of the Golden Altar (Leviticus 4:5-7).

Once a year, on Yom Kippur, the Altar of Incense was purified (Exodus 30:10, Leviticus 16:18-19). The High Priest, after sacrificing a bull and a goat and purifying the Holy of Holies with their blood, would mix the blood of the two animals together. Then, starting at the northeast corner, he smeared the mixture of blood on each of the four corners of the Golden Altar. He then sprinkled the blood eight times on the altar.

In the temple rebuilt after the Babylonian Exile the Golden Altar was restored. Antiochus Epiphanes took it away, but it was afterwards restored by Judas Maccabeus (1 Maccabees 1:23; 4:49). It was at this altar that Zacharias ministered when an angel appeared to him (Luke 1:11). Among the trophies carried away by Titus after the destruction of Jerusalem, and depicted on the Arch of Titus in Rome, the Altar of Incense is not depicted, though the menorah, silver trumpets (the hasoserah mentioned in Numbers 10:2-10), the mortar and pestle used for preparing the incense, and possibly the Table of Showbread are.

It should be mentioned that there are other offerings involving incense, such as the meat offerings, but these were consumed on the Altar of Burnt Offering, not on the Altar of Incense. On the day of Yom Kippur only, the High Priest would offer incense in the Holy of Holies.