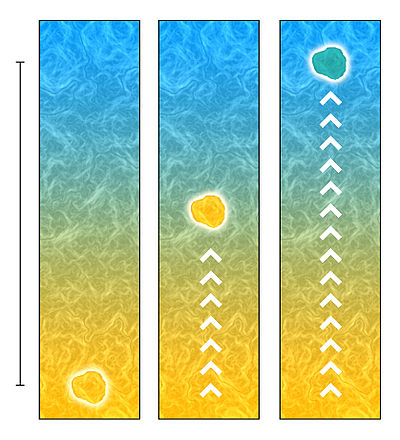 The mixing length is a distance that a fluid parcel will keep its original characteristics before dispersing them into the surrounding fluid. Here, the bar on the left side of the figure is the mixing length. 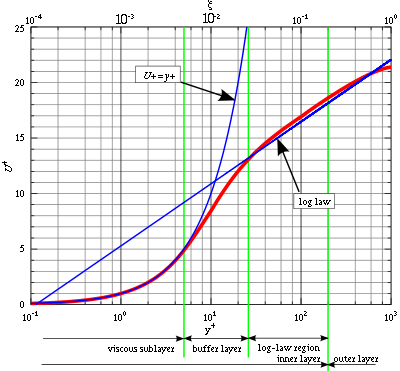 law of the wall, horizontal velocity near the wall with mixing length model

In fluid dynamics, mixing length model is a method attempting to describe momentum transfer by turbulence Reynolds stresses within a newtonian fluid boundary layer by means of an eddy viscosity. The model was developed by Ludwig Prandtl in the early 20th century.[1] Prandtl himself had reservations about the model,[2] describing it as, "only a rough approximation,"[3] but it has been used in numerous fields ever since, including atmospheric science, oceanography and stellar structure.[4]

The mixing length is conceptually analogous to the concept of mean free path in thermodynamics: a fluid parcel will conserve its properties for a characteristic length,

, before mixing with the surrounding fluid. Prandtl described that the mixing length,[5]

In the figure above, temperature,

, is conserved for a certain distance as a parcel moves across a temperature gradient. The fluctuation in temperature that the parcel experienced throughout the process is

To begin, we must first be able to express quantities as the sums of their slowly varying components and fluctuating components.

This process is known as Reynolds decomposition. Temperature can be expressed as:

, is the slowly varying component and

is the fluctuating component.

In the above picture,

can be expressed in terms of the mixing length:

The fluctuating components of velocity,

, can also be expressed in a similar fashion:

although the theoretical justification for doing so is weaker, as the pressure gradient force can significantly alter the fluctuating components. Moreover, for the case of vertical velocity,

must be in a neutrally stratified fluid.

Taking the product of horizontal and vertical fluctuations gives us:

The eddy viscosity is defined from the equation above as:

so we have the eddy viscosity,