Acid–base homeostasis is the part of human homeostasis concerning the proper balance between acids and bases, in other words, the pH. The body is very sensitive to its pH level, so strong mechanisms exist to maintain it. Outside the acceptable range of pH, proteins are denatured and digested, enzymes lose their ability to function, and death may occur. 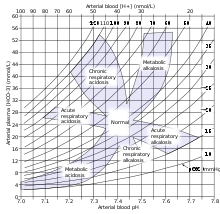 The body's acid–base balance is tightly regulated. Several buffering agents that reversibly bind hydrogen ions and impede any change in pH exist. Extracellular buffers include bicarbonate and ammonia, whereas proteins and phosphate act as intracellular buffers. The bicarbonate buffering system is especially key, as carbon dioxide (CO2) can be shifted through carbonic acid (H2CO3) to hydrogen ions and bicarbonate (HCO3-) as shown below.

Acid–base imbalances that overcome the buffer system can be compensated in the short term by changing the rate of ventilation. This alters the concentration of carbon dioxide in the blood, shifting the above reaction according to Le Chatelier's principle, which in turn alters the pH. For instance, if the blood pH drops too low (acidemia), the body will compensate by increasing breathing, expelling CO2, and shifting the above reaction to the left such that less hydrogen ions are free; thus the pH will rise back to normal. For alkalemia, the opposite occurs.

The kidneys are slower to compensate, but renal physiology has several powerful mechanisms to control pH by the excretion of excess acid or base. In responses to acidosis, tubular cells reabsorb more bicarbonate from the tubular fluid, collecting duct cells secrete more hydrogen and generate more bicarbonate, and ammoniagenesis leads to increased formation of the NH3 buffer. In responses to alkalosis, the kidney may excrete more bicarbonate by decreasing hydrogen ion secretion from the tubular epithelial cells, and lowering rates of glutamine metabolism and ammonia excretion.

Acid–base imbalance occurs when a significant insult causes the blood pH to shift out of the normal range (7.35 to 7.45). In the fetus, the normal range differs based on which umbilical vessel is sampled (umbilical vein pH is normally 7.25 to 7.45; umbilical artery pH is normally 7.18 to 7.38).[1] An excess of acid in the blood is called acidemia and an excess of base is called alkalemia. The process that causes the imbalance is classified based on the etiology of the disturbance (respiratory or metabolic) and the direction of change in pH (acidosis or alkalosis). There are four basic processes: metabolic acidosis, respiratory acidosis, metabolic alkalosis, and respiratory alkalosis. One or a combination may occur at any given time.