From the 1860s onwards, the setting up of a permanent British penal colony and the subsequent arrival of immigrant settlers and indentured labourers, mainly from the Indian subcontinent, had a sustained destructive impact upon Great Andamanese society. By the turn of the 20th century the populations were greatly reduced in numbers, and the various linguistic and tribal divisions among the Great Andamanese effectively ceased to exist, despite a census of the time still classifying the groups as separate.[1] Their linguistic diversity also suffered as the surviving populations intermingled, and some of them intermarried with Karen (Burmese) and Indian settlers.

The Great Andamanese languages are agglutinative languages, with an extensive prefix and suffix system.[3][6] Possibly their most distinctive characteristic is a noun class system based largely on body parts, in which every noun and adjective may take a prefix according to which body part it is associated with (on the basis of shape, or functional association).[4] Thus, for instance, the *aka- at the beginning of the language names is a prefix for objects related to the tongue.[6] An adjectival example can be given by the various forms of yop, "pliable, soft", in Aka-Bea:[6]

Body parts are inalienably possessed, requiring a possessive adjective prefix to complete them, so one cannot say "head" alone, but only "my, or his, or your, etc. head".[4]

The basic pronouns are almost identical throughout the Great Andamanese languages; Aka-Bea will serve as a representative example (pronouns given in their basic prefixal forms):

Judging from the available sources, the Andamanese languages have only two cardinal numbers — one and two — and their entire numerical lexicon is one, two, one more, some more, and all.[6]

The languages and their classification 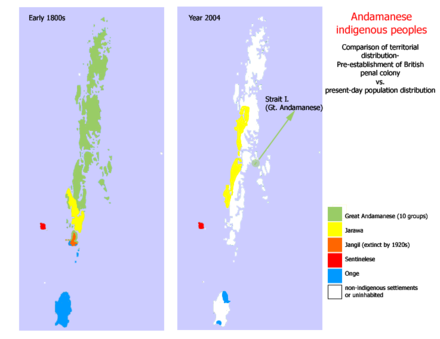 Joseph Greenberg proposed that Great Andamanese is related to western Papuan languages as members of a larger phylum he called Indo-Pacific,[7] but this is not generally accepted by other linguists. Stephen Wurm states that the lexical similarities between Great Andamanese and the West Papuan and certain languages of Timor "are quite striking and amount to virtual formal identity […] in a number of instances", but considers this to be due to a linguistic substratum rather than a direct relationship.[9]

The following poem in Aka-Bea was written by a chief, Jambu, after he was freed from a six-month jail term for manslaughter.[10]

leaning on the bamboo spear.

Note, however, that, as seems to be typical of Andamanese poetry, the words and sentence structure have been somewhat abbreviated or inverted in order to obtain the desired rhythmical effect.

As another example, we give part of a creation myth in Oko-Juwoi, reminiscent of Prometheus:

Mr. Pigeon stole a firebrand at Kuro-t'on-mika, while God was sleeping. He gave the brand to the late Lech, who then made fires at Karat-tatak-emi.