The American badger (Taxidea taxus) is a North American badger, somewhat similar in appearance to the European badger. It is found in the western and central United States, northern Mexico and central Canada, as well as in certain areas of southwestern British Columbia.

Their habitat is typified by open grasslands with available prey (such as mice, squirrels, and groundhogs). They prefer areas with sandy loam soils where they can dig more easily for their prey, such as prairie regions.

In Mexico, this animal is sometimes called "tlalcoyote". The Spanish word for badger is "tejón", but in Mexico this word is also used to describe the coati. This can lead to confusion, for there are both coatis and badgers in Mexico.

Recognized sub-species include: Taxidea taxus jacksoni, found in the western Great Lakes region; Taxidea taxus jeffersoni, on the west coast of Canada and the US; and Taxidea taxus berlandieri, in the south-western US and in northern Mexico.[3][4] There is considerable overlap in the ranges of subspecies, with intermediate forms occurring in the areas of overlap.

The American badger has most of the general characteristics common to badgers; stocky and low-slung with short, powerful legs, they are identifiable by their huge foreclaws (measuring up to 5 cm in length) and distinctive head markings. Measuring generally between 60 to 75 cm (23.6 to 29.5 inches) in length, males of the species are a little bit larger than females (with an average weight of roughly 7 kg (15.5 pounds) for females and up to almost 9 kg (19.8 pounds) for males). Northern subspecies such as T. t. jeffersonii are heavier than the southern subspecies. In the fall, when food is plentiful, adult male badgers can exceed 11.5 kg (25.3 pounds).[5]

Excluding the head, the American badger is covered with a grizzled, silvery coat of coarse hair or fur. The American badger's triangular face shows a distinctive black and white pattern, with brown or blackish "badges" marking the cheeks and a white stripe extending from the nose to the base of the head. In the subspecies T. t. berlandieri, the white head stripe extends the full length of the body, to the base of the tail.[6] 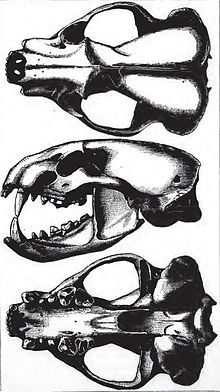 American badgers are largely nocturnal but have been reported active during the day as well. They do not hibernate, but become less active in winter. A badger may spend much of the winter in cycles of torpor that last around 29 hours. They do emerge from their setts when the temperatures are above freezing.[4]

Badgers sometimes use abandoned burrows of other animals like foxes or animals slightly smaller or bigger. They will sometimes form a mutually beneficial relationship with coyotes. Because coyotes are not very effective at digging rodents out of their burrows, they will chase the animals while they are above ground. Badgers on the other hand are not fast runners, but are well-adapted to digging. When hunting together, they effectively leave little escape for prey in the area.[8]

Badgers are normally solitary animals for most of the year, but it is thought that in breeding season they expand their territories to actively seek out mates. Males may breed with more than one female. Mating occurs in late summer and early fall. American badgers experience delayed implantation. Pregnancies are suspended until December or as late as February. Young are born from late March to early April.[4] Litters range from one to five young,[9] averaging about three.[10]

Badgers are born blind, furred, and helpless.[4] Eyes open at 4 to 6 weeks. The female feeds her young solid foods prior to complete weaning, and for a few weeks thereafter.[10] Young American badgers first emerge from the den on their own at 5 to 6 weeks .[9][11] Families usually break up and juveniles disperse from the end of June to August; Messick and Hornocker reported that young American badgers left their mother as early as late May or June.[11] Juvenile dispersal movements are erratic.[9]

Most female American badgers become pregnant for the first time after they are 1 year old. A minority of females 4 to 5 months old ovulate and a few become pregnant. Males usually do not breed until their second year.[4]

Major causes of adult American badger mortality include, in order, automobiles, farmers (by various methods), sport shooting, and fur trapping. Large predators occasionally kill American badgers.[9] Yearly mortality has been estimated at 35% for populations in equilibrium. The average longevity in the wild is 9–10 and the record is 14 years;[12] a captive American badger lived at least 15 years 5 months.[9]

In May 2000, the Canadian Species at Risk Act listed both the American Badger jacksoni subspecies (Taxidea taxus jacksoni) and the jeffersonii subspecies (Taxidea taxus jeffersonii) as an endangered species in Canada.[citation needed] The California Department of Fish and Game (CDFG) designated the American badger as a Species of Special Concern.[13]

American badgers occur primarily in grasslands, parklands, farms, and other treeless areas with friable soil and a supply of rodent prey.[14][15] They are also found in forest glades and meadows, marshes, brushy areas, hot deserts, and mountain meadows. American badgers are sometimes found at elevations up to 12,000 feet (3,600 m) but are usually found in the Sonoran and Transition life zones (which are at elevations lower and warmer than those characterized by coniferous forests).[10] In Arizona American badgers occur in desert scrub and semidesert grasslands.[16] In California, American badgers are occasionally found in open chaparral (with less than 50% plant cover) and riparian zones. They are not usually found in mature chaparral.[17] In Manitoba aspen parklands American badger abundance was positively associated with the abundance of Richardson's ground squirrels (Spermophilus richardsonii).[18]

Badgers are one of the few North American carnivores that digs their own burrows and relies on them heavily in their habitat.

American badger use of home range varies with season and sex of the American badger. Different areas of the home range are used more frequently at different seasons and usually are related to prey availability. Males generally have larger home ranges than females. Radio-transmitter tagged American badgers had an average annual home range of 2,100 acres (850 ha). The home range of one female was 1,790 acres (725 ha) in summer, 131 acres (53 ha) in fall, and 5 acres (2 ha) in winter.[19] Lindzey reported average home ranges of 667 to 1,550 acres (270–627 ha).[20]

The American badger in Ontario, which is part of a particular subspecies, is primarily restricted to the extreme southwestern portion of the province – largely along the north shore of Lake Erie in open areas generally associated with agriculture and woodland edges. There have been a few reports from the Bruce-Grey region. Additionally, although not recently, there have been reports from the southwestern portion of the province, adjacent to the Minnesota border.[21]

American badgers enlarge hunting burrows for concealment, protection from weather, and as natal dens; burrows are up to 30 feet (10 m) long and 10 feet (3 m) deep. Large mounds of soil are built up at burrow entrances.[14]

During the summer American badgers usually use a new den each day; holes are usually excavated at least a few days prior to their being used as a den. There was an average of 0.64 dens (in use, signified by an open hole) per acre (1.6/ha) in northern Utah scrub steppe.[20] Where prey is particularly plentiful, American badgers will reuse dens.[10] In the fall American badgers tend to reuse dens, sometimes for a few days at a time. In winter a single den may be used for the majority of the season.[4] Natal dens are dug by the female and are used for extended periods, but litters are often moved several times, probably to allow the mother to forage in new areas close to the nursery. Natal dens are usually larger and more complex than diurnal dens.[9]