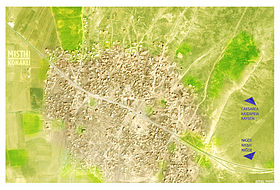 There exist multiple explanations as to the origins and establishment of the city as well as to the etymology of its name. For instance, according to Koimisoglou (2005:434) some sources trace the origin of Misthi to 401 BC when Greek mercenaries came to work for the Persian king Cyrus in the battle against his brother Artaxerxes II. A group of Greek soldiers was given the order to search for food and water. Some of them found an uninhabited area and settled down. Allegedly, they built a city there that became Misthi. This version of the city’s creation, although interesting, has not yet become scientifically verified. Another version is that of Anastasiades (1995:16) who argues that the city was built by Greek mercenaries that were part of Alexander the Great’s army. Rizos (1856:99-100), on the other hand, claims that the inhabitants of Misthi were originally from the Greek islands of Delos, Lemnos and Naxos while Carolides argues that the inhabitants of Misthi were simply Greeks from the lower port cities that came to Misthi to work as paid labour farmers. Kimisoglou (2005) also provides an explanation as to the etymology of the city's name. The ancient Greek word for mercenary is Μίσθιος (Místhios) (sing.) and in plural Μίσθιοι (Místhii) and in Modern Greek Μισθοφόροι (Misthofóri) or Μισθωτοί (Misthotí). Thus the name of the city he argues was a reflection of the inhabitants' original occupation. However, this is also a non-verified explanation. As it happens, the connotation of the word ‘Misthii’, although originally meaning mercenary, transformed during Byzantine times to denote labour-work, i.e. paid labour. Thus some authors have been inclined to suggest that the name refers to the skilled church builders of the city who often travelled far and took part in the constructing of churches.

The city was inhabited purely by Greeks practicing the orthodox religion and wrongfully described as being turcophonic (speakers of the Turkish language). At closer scrutiny however, the Greek dialect spoken, also referred to as Misthiotica, is a dialect based on ancient Greek drawing heavily on Byzantine Greek and with major influx of Turkish loan words. Misthiotica (still spoken today) is a unique dialect (language) linguistically belonging to the Greek Cappadocian group of languages. Misthiotica was a consequence of the isolation the inhabitants suffered from that of other Greek cities and villages. Misthiotica was, however, also spoken by inhabitants of the nearby villages of Tsaricli, Dila (Dilion), Tseltek and Cavaclou because these villages were founded by Misthiotes.

In reality Misthi ceased to exist after the exodus of the Misthiotes from Misthi which occurred following the population exchange according to the Treaty of Lausanne of 1923 signed by Greece and Turkey. Many of the Misthiotes would simply not believe that they would be forced to leave their homeland and continued to conduct their daily duties as traders, farmers and handicraftsmen after the news had arrived. However, when Turkish authority officials entered the village and forced them to leave they had no choice. In just two days, between Tuesday, 24 June and Wednesday, 25 June 1924, the population of Misthi comprising then of approximately 4400 people left Misthi and Cappadocia for Greece never to return again. They went by foot to the seaport of Mersina and embarked on the dangerous journey by sea to the port of Piraeus, Athens, Greece. They left Turkey as Greeks and were received in Greece as Turks. The Mistiotes were among the last identified Greeks to leave Turkey, their exodus ended permanently a period of over 2500 consecutive years of Hellenic presence in Asia Minor. The Misthiotes settled down on the below following places in Greece but as their descendants have reached the fourth, and in some cases the fifth and sixth generation, they are to be found predominantly in the larger cities of Greece such as Thessaloniki and Athens.

List of settling places of the first generation Misthiotes in Greece:

² The name "Gördana" applied by the Misthiotes in their local dialect on current Xerochori seems most likely to be derived from the Bulgarian female name "Gordana". This name is in turn derived from "Gordiana", the feminine form of the Latin "Gordianus" (cf. Gordian). If true then the Misthiotes arriving by foot in the 1920s probably adopted the name from the village's previous inhabitants which are known to have been of slavic origin and forced to move north due to the various wars the region was faced with resulting in the territory becoming annexed by Greece.

³ The name "Tomai" applied by the Misthiotes on current Mandra seems most likely to be derived from the Serbian and Bulgarian form of the name "Thomas". As with the original name on Xerochori, if true it may indicate the ethnicity of the village's previous inhabitants.

The city of Misthi is today inhabited by about 4000 Turkish citizens originating from the population exchange of 1924 between Greece and Turkey. The inhabitants are mostly descendants of Turks born in Thessaloniki, Greece (Tr. Selanik) and in the Kozani region at the turn of the last century. Descendants of the current inhabitants of the city came to Misthi while the Misthiotes had not yet left the city. When the Greeks population left the city the name changed from Misthi to Misly. Today, the city is known as Konaklı. 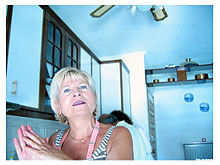 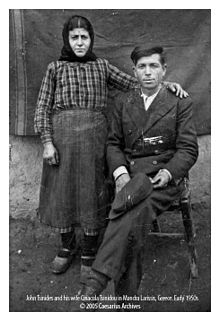 Difficult times in the new country. John Tsinides, a misthiote here with his wife in the new lands. Photo taken outside their home in Mandra Larissis, Greece, in the early 1950s. 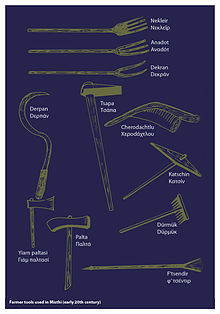 Farming tools and their names in the Misthiotica dialect.

By the end of the 1990s the organizing committees of the descendants from the cities of Misthi and the towns of Tsaricli, Dela (Dilion), Tseltek and Cavaclou agreed to a first Annual Panhellenic Meeting in Mandra, Larissa (Greece). These meetings have since then been arranged at different locations in Greece where Misthiotes (and those related to them) settled down. In reality, the Annual Panhellenic Meeting is a cultural festival with activities ranging from art, music and dance exhibitions, academic lectures (often concerning history), gastronomical tours as well as book exposition. This event has proven highly successful in many respects and has attracted more than 3000 participants every year. In many cases, families have found relatives they did not know exist which has resulted in the illumination of their ancestry. The Gavoustema has also meant the resurrection of the Misthiotic culture which to many, especially to the youngest generations, has been completely unknown. As a result, the Gavoustema has spurred several individuals to engage in layman investigations or professional academic research about the history, culture and language of the Misthiotes.

The Gavoustema has been hosted by the following cities:

The Misthiotica dialect belongs to the Greek-Cappadocian branch of Hellenic languages and is believed to be based on Byzantine Greek with archaic features preserved as well as attached with a plethora of loanwords from the Turkish language. Some examples of this dialect are:

Names of the inhabitants

Compare with Greek-Cappadocian names from the Old Testament

Surnames were seldom used in the sense we know of today. Misthiotes referred to one another on a first name basis (a very common procedure during the Ottoman era for all Ottoman population). To separate between persons with similar or equal names they used patronymes or toponyms, i.e. names from places of origin. For instance "Daniil dou Yaserli" [Δανιήλ dου Γάσερλη], Daniel the Caesarian's / Daniel Caesarian's son. Such surnames became through transformation unrecognizable to the holders. The Yaserli surname for instance was originally in Greek (and Latin) Caesarius/Kaisarios [Καισάριος or plural Καισάριοι], denoting a person from Caesaria (Kayseri). With the influx of Turkish, the name went through a transformation process that rendered it adaptable to the Turkish equivalent Kaiserli (from Kayseri and the suffix 'li' denoting belonging). Usually an initial 'K' in Byzantine Greek was transformed in the Misthiotica dialect either as "ch" or "Y". In this case it was transformed as "Y". When the bearers of the name entered the port of Mersina from where they were taken by boat to Piraeus, Athens, their name were written in Turkish as "Kaiserli". Entering Pireus the Greek authorities "re-Hellenised" their name by adding a common Greek surname suffix "-(i)dis" and once again transformed the surname into its current form "Kaiserlidis". Some members continued however to pronounce the name "Yaserli", and due to the civil war that broke out in Greece following WWII with the loss of the village archives, they were recorded as "Gaserli" or "Gaserlidis" [Γάσερλη, Γασερλίδης] during their entrance to Greek army service.

Resources on Misthi and Cappadocia