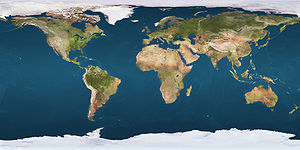 Map of the United States ca. 1849, with the parallel 36°30′ north (plus Virginia) more or less dividing the South from the North – slave states in red, free states in blue

The parallel 36°30′ north is a circle of latitude that is 36.5 degrees north of the Earth's equatorial plane. It is particularly significant in the history of the United States as the line of the Missouri Compromise, which was used to roughly divide the slave and free states. It crosses the Mediterranean Sea, Africa, Asia, the Pacific Ocean, North America, the Atlantic Ocean and Europe.

In southeast Missouri, the Bootheel along the Mississippi River drops about 50 miles (80 kilometers) south to the 36th parallel north for about 30 miles (50 km) because communities along the river felt they had more in common with other Mississippi River towns in Missouri than with the Arkansas Territory to which it would have been assigned. The parallel 36°30′ north forms the rest of the border between Missouri and Arkansas.

The Missouri Compromise of 1820 established the latitude 36°30′ north as the northernmost limit for slavery in the western territories. As part of that compromise, the admission of Maine as a free state was secured to balance Missouri's admission as a slave state, even though nearly the entirety of Missouri lies north of the designated division. In the Compromise of 1850, the parallel 36°30′ north was established as the northernmost boundary of the slave state of Texas. The creation of the New Mexico Territory and the Utah Territory in 1850, the Kansas Territory in 1854, and the Colorado Territory[1] in 1861 moved the boundaries of the western territories north to the 37th parallel north. The gap between the northern boundary of Texas on the parallel 36°30′ north and the southern boundaries of Kansas and Colorado on the parallel 37° north created the No Man's Land of the Oklahoma Panhandle. While a small part of Nevada is south of 36°30′, at that time it was in the New Mexico Territory, and as part of the larger Pah-Ute County was not split from the Arizona Territory until 1871. The Compromise made no attempt to divide California along the line or to allow slavery south of it.

During the American Civil War, all of the states south of the parallel 36°30′ north except California, joined the Confederate States of America. All states north of the parallel, except Virginia, stayed in the Union, although Kentucky and Missouri had Confederate governments in exile, and Maryland (whose Legislature voted not to secede) was somewhat pressured by Abraham Lincoln to stay in the Union to prevent a total surrounding of Washington, D.C. by Confederate states.[citation needed]

Starting at the Prime Meridian and heading eastwards, the parallel 36°30′ north passes through: