The Missouri Athletic Club (often referred to as the MAC), founded in 1903, is a traditional gentlemen's club and athletic club in Downtown St. Louis, Missouri, USA, with a separate athletic campus in the St. Louis County suburb of Town and Country. The MAC awards the annual Hermann Trophy, the highest award in American college soccer. Notable members have included President Harry S. Truman, Charles Lindbergh, and Alan Shepard. The American Legion was organized there in 1919. 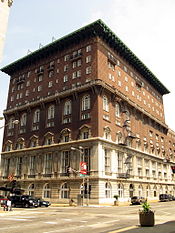 The club is headquartered at 405 Washington Avenue, at the corner of Fourth Street, adjacent to the entrance to the Eads Bridge on the Missouri side. The thirteen-story clubhouse designed by William B. Ittner contains four restaurants, a cigar parlor, a ballroom, a barber shop, numerous private meeting rooms, a reading room, a billiard parlor, a rooftop deck, 80 guest rooms, and full-service athletic facilities.[1] The athletic facilities include weight training, a golf practice room, a pro shop, whirlpools, tanning beds, wet and dry saunas, trainers, pros, a masseuse, squash courts, racquetball courts, and handball courts.[1]

In 1903, during the lead-up to the 1904 Louisiana Purchase Exposition, having organized amateur athletic and social clubs in New York City and New Orleans, entrepreneur Charles Henry Genslinger came to St. Louis and persuaded local prominent citizens to fund a similar club.[2] Boatmen’s Bank donated a seven-story building at Fourth Street and Washington Avenue to the club, which adopted “Missouri Athletic Club” as its name.[2] More than 3,200 members enrolled prior to the club’s opening in September 1903.[2]

Immediately upon its founding, the MAC joined the Amateur Athletic Union, which allowed members to participate in the 1904 Summer Olympics, also held in St. Louis.[2] As part of the AAU, the MAC formed basketball, swimming, track, baseball, boxing, wrestling, bowling, and billiards teams, which competed throughout the United States.[2]

In 1914, the MAC clubhouse was totally destroyed by a fire, which also killed 30 members, guests, and staff.[2] The club decided to construct a new building in its place, which opened in 1916.[2] This has been the clubhouse ever since.[2] From 1916-1939, the MAC was renamed the Missouri Athletic Association.[2]

In 1987, the MAC began awarding the Hermann Trophy to the United States's top male and female college soccer players.[2] This is the highest player's award in college soccer, equivalent to the Heisman Trophy for college football.[2]

In 1988, the club’s membership voted overwhelmingly to admit female members.[2] Before that, membership had been restricted only to men.[2]

In 1995, the club bought the Town and Country Racquet Club in St. Louis County.[2] After investing $2 million in upgrading the facilities, they were reopened as the Missouri Athletic Club-West.[2] MAC-West was re-renovated for $8 million in 2003.