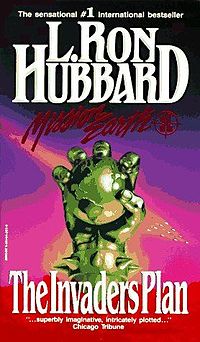 Mission Earth is a ten-volume science fiction novel series by L. Ron Hubbard, founder of the Church of Scientology. Hubbard died three months after the publication of volume 1, the rest of the book being published posthumously.

The series' initial publisher, Bridge Publications coined the word dekalogy, meaning "a series of ten books", to describe and promote the novel. Made up of about 1.2 million words, the epic is a "satirical science fiction adventure set in the far future." It made it to the top of bestseller lists, same as the subsequent volumes in the series.[1]

The books are written as the confessions of Soltan Gris, an agent of the CIA on the planet Voltar (the Coordinated Information Apparatus or, more simply, The Apparatus, which is run with an iron hand by its boss, Lombar Hisst), as an exposé. Each book begins with a disclaimer from Lord Invay, the head Censor, denying the very existence of the planet Earth itself and denouncing the story as rankest fiction, despite the inclusion of characters who are real and known public figures in the novel's fictional world, such as Jettero Heller and the Countess Krak.

The Voltar Confederacy wishes to conquer the planet Earth, which they regard as an important potential base on the main route of their planned invasion of the galactic centre. The conquest of Earth is scheduled for over 100 years in the future, but the Grand Council of Voltar becomes convinced that it must send a mission to prevent Earth from destroying itself through pollution and possibly war, so as not to disrupt the future timetable of conquest. The mission is assigned to Fleet Combat Engineer Jettero Heller, a character of perfection and incorruptibility. Soon after reaching Earth, he heads to New York City. He investigates why Earth is self-destructing, unaware that he is being tracked and that factions on Voltar want his mission to fail.

Unknown to Heller, Earth is also the base for a secret plan put into action by the insane, diabolically evil Lombar Hisst to seize the throne of the Empire of Voltar for himself. Hisst has been importing illegal narcotic drugs from Earth and using them to enslave the entire population of aristocratic heads of government on Voltar. By turning the entire government into drug addicts, Hisst plans to take control of the Empire for himself. Because of Earth's role as a supplier of drugs, Hisst decides that Heller's mission to save the planet must not succeed.

Lombar Hisst assigns a cowardly, sadistic, greedy stooge named Soltan Gris to supervise the mission to Earth, in order to sabotage it and destroy Jettero Heller. The majority of the story is told from Gris' point of view, with an emphasis on the comical situations Gris ends up in as he tries to stop Heller. Over the course of the novel, Gris finds himself in possession of twelve tons of pure gold, which he tries to launder through a Swiss bank account in order to keep it all for himself; he becomes a prisoner of two man-hating lesbians (who end up marrying Gris after he rapes them and thereby "cures" them of their lesbianism, but not before various ingenious tortures, one of which involve a cheese grater and chili powder); he repeatedly finds himself losing large amounts of money, becoming broke, and having to concoct wild schemes to save himself from his creditors; he has an affair with a young nymphomaniac teenage girl whom he cannot escape; he hires a hit man to kill Heller's fiancé, only to stumble through the affair and end up being a target for the hit man himself; he embarks on a long cruise through the Mediterranean (mirroring Hubbard's own voyages through the area in the 1970s); and finally, Gris becomes the target after Heller realizes that he is behind the operation to disrupt his mission.

Heller's investigations of Earth soon reveal to him that the entire planet is in the grip of a vast organized corporate conspiracy headed by the Rockecenter corporation and its head, Delbert John Rockecenter (the similarity to "John D. Rockefeller" is one of many blatant puns and references included in the series by Hubbard). Rockecenter is the head of a vast oil-producing corporation that keeps the population of Earth under control by using drugs and rock and roll music to keep the population sedate. (Rock music is used in the novel to spread sexual deviancy, especially homosexuality, among the population of Earth.)

Heller's attempts to break the demonic control of Earth by Rockecenter make him a target, and the corporation uses its most dangerous weapons to destroy him: psychiatry and psychology, and a mad, idealistic public relations genius by the name of J. Walter Madison (known as "J. Warbler Madman"). Madison initiates a wide-reaching public relations campaign to make Heller known to the world as the "Whiz Kid", but results in destroying Heller's reputation so that all of Heller's efforts to save the planet come to naught, as Madison's employer, Rockecenter, wanted. Fortunately, Heller's outstanding skills and abilities are reinforced by the arrival on Earth of his fiancée, the Countess Krak, and the alliance and friendship of the Mafia — specifically the Corleone family.

After a series of world-shattering events, which include the impact of an ice meteor on the Soviet Union, the world's entire oil supply being turned radioactive, and a black hole orbiting the Earth (providing free energy for Heller to harness and make available to the world), Heller returns to Voltar to find that not only have Lombar Hisst's plans to enslave the government nearly succeeded, but Madison the PR madman has been loosed on the empire of Voltar and is in the process of starting a galactic civil war.

After the defeat of Hisst and Madison, a massive cover-up operation commences to wipe out the effects of PR, psychology and psychiatry, and the CIA from Voltar's empire. All mention of these subjects is censored and the planet Earth is eradicated from all star charts and similar items. As far as the Voltarans are concerned, there is no such place as planet Earth.

Page counts are from hardcover editions, and total 3992 pages.

In spite of its sales success, Mission Earth was lambasted by critics, receiving many negative reviews. It is frequently cited within science fiction circles as one of the worst science fiction novels ever written. The influential The Encyclopedia of Science Fiction describes the series "whose farcical overemphases fail to disguise an overblown tale that would have been more at home in the dawn of pulp magazines." More forgiving literary critics usually cite Battlefield Earth as Hubbard's best work of the later years of his life. (i.e., better than Mission Earth, his only other later published work of fiction). Despite the overall negative response, the books carry blurbs of praise from some newspapers and well known sci-fi authors, such as Orson Scott Card and A. E. van Vogt.

The New York Times review of the first volume, The Invaders' Plan, describes it thus: "... a paralyzingly slow-moving adventure enlivened by interludes of kinky sex, sendups of effeminate homosexuals and a disregard of conventional grammar so global as to suggest a satire on the possibility of communication through language."[3]

In L. Ron Hubbard and Scientology, a survey of Hubbard's literary career, Marco Frenschkowski of the Johannes Gutenberg University of Mainz described the Mission Earth series:[4]

The satire is not humorous, but biting and harsh, which makes the novels not easy to read. Also Hubbard somehow had lost contact with developing narrative techniques: he writes exactly as he had done 40 years earlier. When read as entertainment Mission Earth is disappointing: it does not entertain. Many of the scenes (especially some sexual encounters) are incredibly grotesque, not in a pornographic sense, but they are violently aggressive about modern American ideals. The Mission Earth novels on the whole are a subversive, harsh, poignant attack on American society in the 1980s. As such they have so far received almost no attention, which perhaps they do deserve a bit more. They also have some quite interesting characters, especially when read with a deconstructionist approach. These 11 later novels by Hubbard are not Scientology propaganda literature, but have some topics in common, especially the very strong opposition against 20th century psychology and psychiatry, which is seen as a major source of evil. All open allusions to Scientology are strictly avoided. They are not as successful in their use of suspense and humour as Hubbard's early tales, but have to say perhaps more about the complex personality of their author.

In 1991, the town of Dalton, Georgia attempted to remove the Mission Earth books from its public library, citing what was described as "repeated passages involving chronic masochism, child abuse, homosexuality, necromancy, bloody murder, and other things that are anti-social, perverted, and anti-everything." The attempt was unsuccessful, though this placed the Mission Earth series into the category of banned books that have been challenged in the United States. [1]

The Mission Earth books were a major sales success, particularly the earlier volumes in the series, with all individual volumes reaching the New York Times bestseller list.[5] The extent to which this reflects actual popularity is strongly questioned.[6] A large number of booksellers, publishing executives, and former Scientologists state that, as with other Hubbard books, the Church of Scientology engaged in a massive book-buying campaign, similar to the campaign to promote Battlefield Earth, so as to deliberately inflate sales of the series in order to promote it as a best-selling work of literature.[6] Stories of the books being sent to stores bearing other store's price tags circulated throughout the science fiction fan community.

In a two-year span, Hubbard logged 14 consecutive books on the New York Times list. Adam Clymer, a New York Times executive, said that, while the books have been sold in sufficient numbers to justify their bestseller status, "we don't know to whom they were sold." He said the newspaper uncovered no instances in which vast quantities of books were being sold to single individuals.[6]