Missile lock-on
For other uses, see Lock On (disambiguation).

Missile lock-on refers to a scenario where the guidance system for a missile (or its associated launch vehicle) can accurately track a target, and a fire-control system can calculate the required flightpath for the missile to hit the target. Missile lock-on is typically indicated to the pilot or missile operator via an audible tone, a head-up display or a helmet-mounted display.[1] 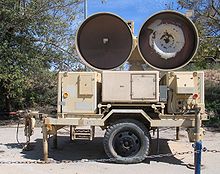 With a semi-active radar homing system, the launch platform acquires the target with its search radar. The missile is then powered up while the launch platform's illuminator radar "lights up" the target for it. The illuminator is a radar transmitter with a narrow, focused beam that may be separate from the search radar and that can be directed at a target using information from the search radar. When the passive radar of the missile's guidance system is able to "see" the radar return from the target, missile lock-on is achieved and the weapon is ready to be launched.[2]

Detection by the target

The subject of a lock-on may become aware of the fact that it is being actively targeted by virtue of the electro-magnetic emissions of the tracking system, notably the illuminator. This condition will present a heightened threat to the target, as it indicates that a missile may be about to be fired at it.