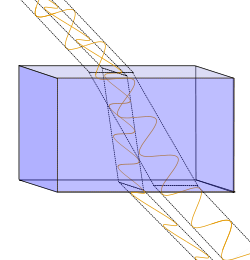 Displacement of light rays with perpendicular polarization through a birefringent material. 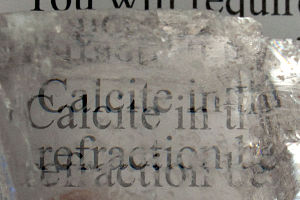 A calcite crystal seen through a polarizing filter

Birefringence, or double refraction, is the decomposition of a ray of light into two rays when it passes through certain anisotropic materials, such as crystals of calcite or boron nitride. The effect was first described by the Danish scientist Rasmus Bartholin in 1669, who saw it in calcite.[1] The effect is now known to also occur in certain plastics, magnetic materials, various noncrystalline materials, and liquid crystals.[2]

The simplest instance of the effect arises in materials with uniaxial anisotropy. That is, the structure of the material is such that it has an axis of symmetry with no equivalent axis in the plane perpendicular to it. (Cubic crystals are thereby ruled out.) This axis is known as the optical axis of the material, and light with linear polarizations parallel and perpendicular to it has unequal indices of refraction, denoted ne and no, respectively, where the suffixes stand for extraordinary and ordinary. The names reflect the fact that, if unpolarized light enters the material at a nonzero acute angle to the optical axis, the component with polarization perpendicular to this axis will be refracted as per the standard law of refraction, while the complementary polarization component will refract at a nonstandard angle determined by the angle of entry and the difference between the indices of refraction,

known as the birefringence magnitude. The light will therefore split into two linearly polarized beams, known as ordinary and extraordinary. Exceptions arise when the light propagates either along or orthogonal to the optical axis. In the first case, both polarizations and rays are ordinary and are not split. In the second case also, there is no splitting of the light into two separate directions, but the ordinary and extraordinary components travel at different speeds, and the effect is used to interconvert between linear and circular or elliptical polarizations.

Double refraction also occurs in biaxially anisotropic materials, which are also known as trirefringent, but its description is then substantially more complex.[3]

While birefringence is often found naturally (like anisotropic crystals), there are several ways to create it in optically isotropic materials:

The best-studied uniaxial birefringent materials are crystalline, the refractive indices of several of which tabulated to the right (at wavelength ~ 590 nm).[4] Silicon carbide, also known as Moissanite, is strongly birefringent.

Many plastics are birefringent, because their molecules are 'frozen' in a stretched conformation when the plastic is moulded or extruded.[5] For example, cellophane is a cheap birefringent material, and Polaroid sheets are commonly used to examine for orientation in birefringent plastics like polystyrene and polycarbonate. Birefringent materials are used in many devices that manipulate the polarization of light, such as wave plates, polarizing prisms, and Lyot filters.

As stated above, birefringence can also arise in magnetic materials, but substantial variations in magnetic permeability of materials are rare at optical frequencies.

Birefringence can be observed in amyloid plaque deposits such as are found in the brains of Alzheimer's patients. Modified proteins such as immunoglobulin light chains abnormally accumulate between cells, forming fibrils. Multiple folds of these fibers line up and take on a beta-pleated sheet conformation. Congo red dye intercalates between the folds and, when observed under polarized light, causes birefringence.

Cotton (Gossypium hirsutum) fiber is birefringent because of high levels of cellulosic material in the fiber's secondary cell wall.

Slight imperfections in optical fiber can cause birefringence, which can cause distortion in fiber-optic communication; see polarization mode dispersion. The imperfections can be geometrically based, or a result of photoelastic effects from loading on the optical fiber.

For a given propagation direction, in general there are two perpendicular polarizations for which the medium behaves as if it had a single effective refractive index. In a uniaxial material, rays with these polarizations are called the extraordinary and the ordinary ray (e and o rays), corresponding to the extraordinary and ordinary refractive indices. In a biaxial material, there are three refractive indices α, β, and γ, yet only two rays, which are called the fast and the slow ray. The slow ray is the ray that has the highest effective refractive index.

Biaxial birefringence, also known as trirefringence, describes an anisotropic material that has more than one axis of anisotropy. For such a material, the refractive index tensor n, will in general have three distinct eigenvalues that can be labeled nα, nβ and nγ. 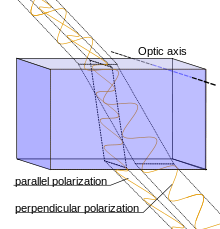 Biaxial crystals are defined as positively (or negatively) birefringent when the slow ray (or fast ray, respectively) bisects the acute angle formed by the optical axes.[7]

Birefringence and related optical effects (such as optical rotation and linear or circular dichroism) can be measured by measuring the changes in the polarization of light passing through the material. These measurements are known as polarimetry.

Birefringence of lipid bilayers can be measured using dual polarisation interferometry. This provides a measure of the degree of order within these fluid layers and how this order is disrupted when the layer interacts with other biomolecules.

A common feature of optical microscopes is a pair of crossed polarizing filters. Between the crossed polarizers, a birefringent sample will appear bright against a dark (isotropic) background.

Birefringent filters are also used as spatial low-pass filters in electronic cameras, where the thickness of the crystal is controlled to spread the image in one direction, thus increasing the spot-size. This is essential to the proper working of all television and electronic film cameras, to avoid spatial aliasing, the folding back of frequencies higher than can be sustained by the pixel matrix of the camera.

Birefringence is utilized in medical diagnostics. 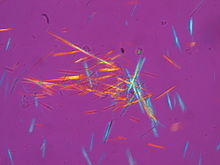 Urate crystals, with the crystals with their long axis seen as horizontal in this view being parallel to that of a red compensator filter. These appear as yellow, and are thereby of negative birefringence.

In ophthalmology, scanning laser polarimetry utilises the birefringence of the retinal nerve fibre layer to indirectly quantify its thickness, which is of use in the assessment and monitoring of glaucoma.

Birefringence characteristics in sperm heads allow for the selection of spermatozoa for intracytoplasmic sperm injection.[10] Likewise, zona imaging uses birefringence on oocytes to select the ones with highest chances of successful pregnancy.[11] Birefringence of particles biopsied from pulmonary nodules indicates silicosis.

Another form of birefringence is observed in anisotropic elastic materials. In these materials, shear waves split according to similar principles as the light waves discussed above. The study of birefringent shear waves in the earth is a part of seismology. Birefringence is also used in optical mineralogy to determine the chemical composition, and history of minerals and rocks. 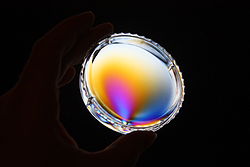 Color pattern of a plastic box with "frozen in" mechanical stress placed between two crossed polarizers.

Isotropic solids do not exhibit birefringence. However, when they are under mechanical stress, birefringence results. The stress can be applied externally or is ‘frozen’ in after a birefringent plastic ware is cooled after it is manufactured using injection molding. When such a sample is placed between two crossed polarizers, colour patterns can be observed, because polarization of a light ray is rotated after passing through a birefingent material and the amount of rotation is dependent on wavelength. The experimental method called photoelasticity used for analyzing stress distribution in solids is based on the same principle.

. If the wave has an electric vector of the form:

where r is the position vector and t is time, then the wave vector k and the angular frequency ω must satisfy Maxwell's equations in the medium, leading to the equations:

where c is the speed of light in a vacuum. Substituting eqn. 2 in eqns. 3a-b leads to the conditions:

For the matrix product

often a separate name is used, the dielectric displacement vector

. So essentially birefringence concerns the general theory of linear relationships between these two vectors in anisotropic media.

To find the allowed values of k, E0 can be eliminated from eq 4a. One way to do this is to write eqn 4a in Cartesian coordinates, where the x, y and z axes are chosen in the directions of the eigenvectors of ε, so that

where Ex, Ey, Ez, kx, ky and kz are the components of E0 and k. This is a set of linear equations in Ex, Ey, Ez, and they have a non-trivial solution if their determinant is zero:

Multiplying out eqn (6), and rearranging the terms, we obtain

In the case of a uniaxial material, where nx=ny=no and nz=ne say, eqn 7 can be factorised into

Each of the factors in eqn 8 defines a surface in the space of vectors k — the surface of wave normals. The first factor defines a sphere and the second defines an ellipsoid. Therefore, for each direction of the wave normal, two wavevectors k are allowed. Values of k on the sphere correspond to the ordinary rays while values on the ellipsoid correspond to the extraordinary rays.

For a biaxial material, eqn (7) cannot be factorized in the same way, and describes a more complicated pair of wave-normal surfaces.[12]

Birefringence is often measured for rays propagating along one of the optical axes (or measured in a two-dimensional material). In this case, n has two eigenvalues that can be labeled n1 and n2. n can be diagonalized by:

where R(χ) is the rotation matrix through an angle χ. Rather than specifying the complete tensor n, we may now simply specify the magnitude of the birefringence Δn, and extinction angle χ, where Δn = n1 − n2.

Due to quantum effects, the vacuum can behave like a birefringent medium. In the limit of weak fields and slowly varying fields, the Euler-Heisenberg Lagrangian becomes:

where α is the fine sructure constant and m the electron mass.

The effective electric permittivity tensor and magnetic permeability tensor are then given by [13]:

In the case of an plane wave propagating through a region of constant magnetic field, one finds that there are two eigenmodes. One has the electric component of the plane wave perpendicular to the plane spanned by the wavevector and the magnetic field, the other has the magnetic component perpendicular to this plane. The former has an index of refraction of

where θ is the angle between the wave vector and the magnetic field, while the latter has an index of refraction of