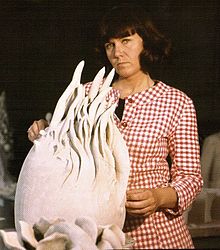 Mirjana Isaković was born on December 31, 1936. She graduated from Academy of Applied Arts in 1963, when she became a member of ULUPUDS (The Association of Applied Arts Artists and Designers of Serbia). In 1972 she became professor at Faculty of Applied Arts where she chaired the department studio for art ceramics and ceramic sculpture. She retired in 2002. Married to Halil Tikvesa Serbian painter and graphics designer with whom she has a daughter Lana Tikvesa.[1]

In 1971 elected as professor at Faculty of Applied Arts and replaced the retired professor Ivan Tabaković. Her career as a successful pedagogue is witnessed by biographies of her students and, above all, the fact that she established the "Belgrade School" in the international art scene, where it occupies an impotent place. Mirjana Isaković mentored fourteen MA students who successfully matriculated from Faculty of Applied Arts.[1]

Five complete opuses which, taken individually, extended the limits of this, with us small, kind of visual art, and which were exhibited at eleven Stand Alone Exhibitions/ 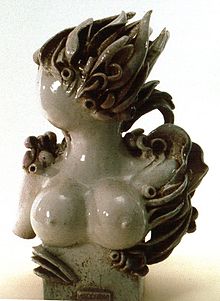 over 150 Group Exhibitions in the country and abroad

Juried Group Exhibitions in the Country(Selection)

Some of the exhibitions: