Miraflores is a district of the Lima Province in Peru. Known for its shopping areas, gardens, flower-filled parks and beaches, it is one of the upscale districts that make up the city of Lima.

Originally founded as San Miguel de Miraflores, it was established officially as a district on January 2, 1857. As a result of the Battle of Miraflores fought during the War of the Pacific, Miraflores got the designation of Ciudad Heroica ("Heroic City"). The current mayor is Jorge Muñoz. The district's postal code is 18.

The district has a total land area of 9.62 km². Its administrative center is located 79 meters above sea level. 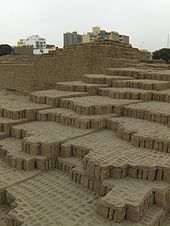 The only pre-Inca ruin remaining in Miraflores, Huaca Pucllana (formerly Hispanicized as Juliana) can still be seen. The Spanish town of Miraflores was established in the 16th century. However it was merged into the Lima Metropolitan Area as the city expanded during the early 20th century. During the War of the Pacific(1879–1885), the district was the scene of the Battle of Miraflores. Two thousand people died as a result and the district was sacked and burned by Chilean invaders.

The district is also a cultural center, with theaters, cinemas and art galleries. It also has a pre-Inca mud-brick temple called the Huaca Pucllana, one of a number of archaeological sites found in Lima.

In terms of education, the Miraflores district lodges some of the most prestigious high schools in Peru, such as Markham College, and San Silvestre School (British schools), Deutsche Schule Alexander von Humboldt Lima [1](German school), Pestalozzi [2](Swiss school) and Carmelitas School. It also lodges the University of Piura. 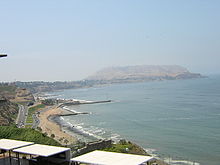 The district is full of hotels, cafés, pubs, restaurants and shops, which is a draw for a large part of the Lima population on Sundays. Parque Kennedy, Miraflores' central plaza, regularly has flea markets and art exhibitions. Larcomar, a shopping mall overlooking the Pacific coast, is located in Miraflores, and is very popular among tourists, young people, and the middle and upper classes. They have restaurants, stores, a food court, ice cream shops, arcades, bowling alleys, nightclubs, bars, and the most modern cinema in all of Lima.

The Calle de las Pizzas ("Pizza Street") in downtown Miraflores, a favourite among Lima's teenagers and young adults, has many pubs which every weekend are filled with people.

Miraflores has always been a major hub for tourists in Lima. There are a number of hotels in the area, including a couple of international hotel brands (Hilton and Ritz Carlton) which have projects planned for construction in 2009. Furthermore, there are several shops selling souvenirs and tourist products. The Miraflores Park Hotel is one of the districts 5-star hotels. 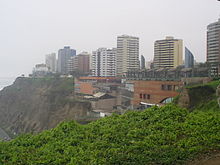 View of Larcomar in Miraflores

The Costa Verde ("green coast") area has several beaches, which draw surfers and beachgoers alike in summertime. However, these rocky beaches are not as popular with bathers as the large, sandy beaches in the districts south of Lima, such as Santa María del Mar, Punta Hermosa and Punta Negra. Larcomar Shopping Center is located in this area.