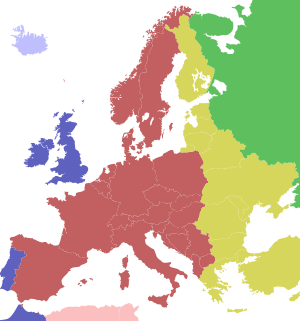 Further-eastern European Time (FET) (Kaliningrad Time in Kaliningrad Oblast in Russia, Minsk Time in Belarus) is since September 2011 defined as three hours ahead of UTC (UTC+03:00). It was established as the official time for the Russian Kaliningrad Oblast and then followed by Belarus.

Until 2011, Further-eastern European Time was identical to Eastern European Time (UTC+2; UTC+3 with daylight saving time). However, on 27 March 2011, Russia moved to the so called "year-round daylight saving time"[1], so that clocks would remain on what had been the summer time all year round, making Kaliningrad Time permanently set to UTC+3, peculiarly placing its time ahead of countries to its east during winter. Belarus followed Russia on September 15, 2011[2], and the same decisions was made by the Ukrainian parliament on September 20, 2011[3]. After strong criticism from the mass media, on 18 October 2011 the Ukrainian parliament cancelled its previous decision[4]. Transnistria, a breakaway territory from Moldova on the Dniester river bordering Ukraine, followed Ukraine by at first adopting Further-eastern European Time[5] but later cancelling this decision[6].

The name "Further-eastern European Time" seems to have come from work on tzdata, the Unix time zone database.[7][8]