The method is suitable for design by graphical methods and was used before digital computers became available. In World War 2 this method was used to design Gun laying control systems.[6] It is still used now, but not always referred to by name. It is often discussed within the context of Bode plot methods.

"minor loop feedback" returns 12,200 hits from google. Among them are 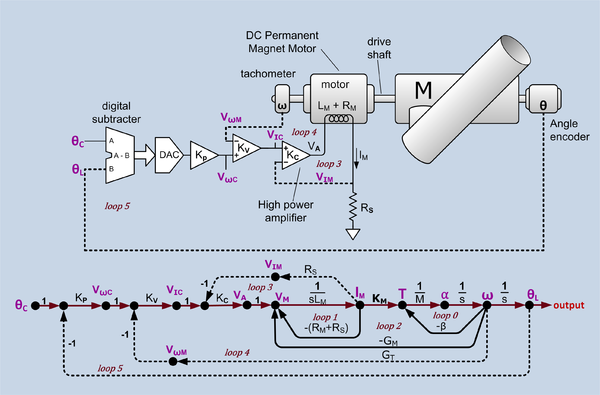 This example is slightly simplifed (no gears between the motor and the load) from the control system for the Harlan J. Smith Telescope at the McDonald Observatory. In the figure there are three feedback loops: current control loop, velocity control loop and position control loop. The last is the main loop. The other two are minor loops. The forward path, considering only the forward path without the minor loop feedback, has three unavoidable phase shifting stages. The motor inductance and winding resistance form a lowpass filter with a bandwidth around 200 Hz. Acceleration to velocity is an integrator and velocity to position is an integrator. This would have a total phase shift of 180 to 270 degrees. Simply connecting position feedback would almost always result in unstable behaviour.

The innermost loop regulates the current in the torque motor. This type of motor creates torque that is nearly proportional rotor current, even if it is forced to turn backward. Because of the action of the commutater, there are instances when two rotor windings are simultaneously energized. If the motor was driven by a voltage controlled voltage source, the current would roughly double, as would the torque. By sensing the current with a small sensing resister (RS) and feeding that voltage back to the inverting input of the drive amplifier, the amplifier becomes a voltage controlled current source. With constant current, when two windings are energized, they share the current and the variation of torque is on the order of 10%.

The next innermost loop regulates motor speed. The voltage signal from the Tachometer(actually a small permanent magnet DC generator) is proportional to the angular velocity of the motor. This signal is fed back to the inverting input of the velocity control amplifier (KV). The velocity control system makes the system 'stiffer' when presented with torque variations such as wind, movement about the second axis and torque ripple from the motor.

The outermost loop, the main loop, regulates load position. In this example, position feedback of the actual load position is presented by a Rotary encoder that produces a binary output code. The actual position is compared to the desired position by a digital subtracter that drives a DAC (Digital-to-analog converter) that drives the position control amplifier (KP).

The link above is a searchable pdf. Search for "minor loop synthesis" which is on page 26.

The link above is a searchable pdf. Search for "minor loop synthesis" which is in the sylibus of EE5650