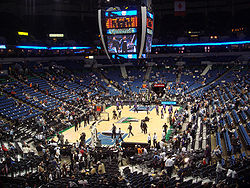 The interior of the Target Center

The Minnesota Timberwolves relocation to New Orleans was a failed 1994 effort to relocate the National Basketball Association (NBA) franchise Minnesota Timberwolves to New Orleans, Louisiana. After a prolonged courtship, the Top Rank group secured a contract to purchase the Timberwolves for $152.5 million from owners Marv Wolfenson and Harvey Ratner, only to have the league reject the purchase in June 1994. Following the rejection by the league, Minnesota businessman Glen Taylor purchased the franchise and kept the team in Minneapolis. After failing to attract the Vancouver Grizzlies in 2001, New Orleans would return to the NBA following the relocation of the Charlotte Hornets for the 2002–03 season.

By the 1994 NBA All-Star Game, speculation as to whether or not the Timberwolves would remain in Minneapolis following the 1994–95 season became an issue. On February 11, 1994, NBA commissioner David Stern announced that he and his representatives would serve as mediators in an effort to resolve issues related to the debt owed on the Target Center, the Timberwolves home arena.[1] The Timberwolves ownership was seeking a public or private entity to purchase the $73 million remaining on the arena's mortgage, otherwise the team would be sold and in all likelihood moved from Minnesota.[1] Although mediation talks were just beginning to keep the team in place, by the following week it was revealed that ownership had met with representatives from San Diego, Nashville and New Orleans to discuss the potential relocation of the franchise.[2] By late February, New Orleans emerged as the likely city for the team to relocate to if a deal could not be reached to keep the team in Minneapolis. This became the case after the potential ownership group Top Rank signed a letter of intent to purchase the team and move it to New Orleans if debt issues at the Target Center were not resolved.[3]

Although a potential local ownership group was identified in late February,[4] local opposition to a perceived bailout of multi-millionaire ownership began to take hold.[5] A citizens opposition group called Don't Target Us (referencing the Target Center in their name) formed to voice their opposition to a public purchase of the facility. Additionally, polling at the time showed support for public intervention as being unfavorable with 60 percent of those polled being against intervention.[5] However support for intervention on the arena issue began to take shape as well with several at the local and state level stating their intention to make a deal happen. Additionally, businesses near the arena starting a campaign to keep the team in Minneapolis.[6]

While political maneuvering was continuing in Minnesota, by early April it was reported that Nashville had become the favored place for relocation over New Orleans.[7] The Nashville offer became the preferred option as it included $80 million for the franchise from Gaylord Entertainment and an additional $20 million to be paid to the city of Minneapolis to pay down debt at the Target Center.[8] New Orleans later reemerged as the lead candidate for relocation by the end of April when Top Rank announced a purchase price of $152.5 million.[9] By early May, the Minnesota state legislature approved a bill that would use public funds to purchase the Target Center for $48 million.[10] The purchase by the state was contingent on ownership agreeing to keep the franchise in the arena for 30 years.[10] However, ownership could not find a local suitor willing to pay what Top Rank had offered for the franchise setting the stage for relocation.[11]

After months of speculation, on May 23, 1994, Top Rank successfully purchased the franchise for $152.5 million with the intention of relocating it to New Orleans.[12] The purchase occurred following an agreement between Top Rank and Timberwolves ownership that allowed Top Rank to purchase the franchise if no local ownership groups were found by May 20, 1994.[13] On June 6, 1994, Top Rank officially filed the paperwork to the NBA seeking to relocate the Timberwolves to New Orleans for the 1994–95 NBA season.[14] The filings also identified Fred Hofheinz as the sole Top Rank stockholder, with Houston lawyer John O'Quinn and stockbroker Robert Higley serving as the team's major partners.[14]

With the timber wolf being a species not native to Louisiana, there was much speculation as to a what the relocated franchise would be called.[15] Although never officially changed, some of the proposed names included: Rhythm from New Orleans Mayor Marc Morial and Angels from Louisiana Governor Edwin Edwards.[15] After speculation as to where the team would play their home games while a new arena was constructed, Superdome officials notified the league that enough dates would be available to schedule 41 home games at the dome for the 1994–95 season.[16] Prior to this announcement, the team was rumored to play games at the Lakefront Arena, the Pete Maravich Assembly Center in Baton Rouge or the Mississippi Coast Coliseum in Biloxi when the Superdome was unavailable.[16]

After over eight months of working to purchase the franchise, local businessman Bill Sexton withdrew his bid to purchase the Timberwolves in August.[22] However, Glen Taylor later headed a group to purchase the team with the NBA approving the transaction in October 1994.[23] By 1995 Top Rank would enter involuntary bankruptcy and as a result, the NBA rejected their offer securing the franchise in Minneapolis.[24]