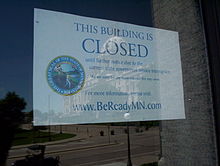 Sign in the door way of the Minnesota State Office Building, across the street of the Main Capital Building

The 2011 Minnesota state government shutdown was a government shutdown affecting the U.S. state of Minnesota, due to a fiscal dispute between the Governor and the state legislature. The shutdown started at midnight, July 1, 2011. The eventual budget agreement started to form after Governor Mark Dayton announced on July 14 that he would "reluctantly" pass the last proposal of the Republican legislative leadership before the shutdown, but with conditions.[1] On July 20, 2011, the government shutdown ended.

Going into the 2010 election, the state government was facing an approximately $5 billion budget shortfall in the coming 2011–2013 biennium, left over from the outgoing administration of Republican Governor Tim Pawlenty. The Republican Party claimed that the budget was based on a previous unrealistic projected increase in spending and pledged to balance the budget without raising taxes. Former Democratic–Farmer–Labor U.S. Senator Mark Dayton campaigned pledging to close the budget deficit by increasing income taxes on the state's highest earners. In the election, the Republicans won control of both houses of the legislature for the first time in decades while Dayton narrowly defeated Republican Tom Emmer.[2][3][4]

The legislature passed budget bills which balanced the budget with significant cuts to social and infrastructure services, rather than raising any taxes.[3] Governor Dayton vetoed 9 of the 10 budget bills after the regular legislative session had ended. Since Dayton did not call a special session of the legislature to further address the budget due to the lack of agreement between him and the Republican legislative leaders, Kurt Zellers and Amy Koch, limited legal authority existed to spend money after July 1, although a Ramsey County judge authorized a small portion of the spending. Because of this, major ("non-essential") portions of the state government were shut down as of midnight on June 30 – July 1, 2011.[5]

Minnesota's state government can not operate without appropriations under law, as mandated by the Minnesota Constitution. However, state courts have determined that Priority One and Two Critical Services must continue in the event of a shutdown.[6] These terms are used to describe the types of state contingency planning, with critical/core activities – those that must remain uninterrupted to avoid a potential immediate threat to public health or safety, are considered Priority One. This extensive list has been compiled and prepared by the Minnesota Management and Budget.[6] 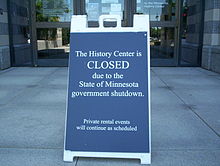 The shutdown began on July 1. At that time, all less state urgent government spending and operations stopped. These included driving tests, child-care assistance, services for the deaf, senior and disability linkage lines, criminal background checks, and road construction. Many government offices, state parks, highway rest areas, the Minnesota Zoo, and sites run by the Minnesota Historical Society, among others, closed.[7] Institutions not part of the state government stayed open, and museums such as the Science Museum of Minnesota reported an increase in visits, as did county parks, and attractions in neighboring states.[8] On July 2, Ramsey County District Judge Kathleen Gearin ordered the reopening of the Minnesota Zoo, which it did on July 3. In a similar case the same day, Gearin stated Canterbury Park in Shakopee would remain closed.[9]

On July 4, Republican lawmakers affirmed their commitment to not agree to a budget of over $34 billion.[3]

There have been several effects from the state shutdown. Here is a partial list:

From the first day of the shutdown on July 1, until July 14, there were no announced talks between the two sides.[clarification needed][citation needed]

The government shutdown ended after Governor Dayton announced he would accept the last Republican offer before the shutdown, with certain conditions.[1][16][17]

The Republican offer relied on a shift in K-12 school aid payments from 70/30 to 60/40, and issuing tobacco bonds to cover the remaining gap. Other provisions included increasing the per student formula by $50 per year to cover additional borrowing costs, adding $10 million more to the University of Minnesota to equalize Minnesota State Colleges and Universities cuts, and restoring funding to the Department of Human Rights and Trade Office.[1] Documents released after June 30 stated that the Republican leadership included anti-abortion agenda, voting ID, and related issues during the budget negotiations.[18]

Dayton's conditions were that policy measures on matters such as abortion be dropped from the budget, 15 percent across the board reductions to state employees in all agencies be dropped,[19] and a $500 million infrastructure construction bonding bill.

On July 20, the legislature passed the budget bills, which were signed the same day by the governor.[16]