Ministry of Security and Justice (Netherlands)

Ministry of Security and Justice (Netherlands) 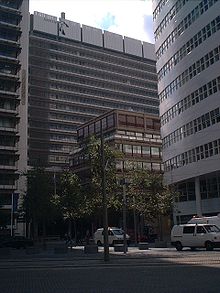 The Building in the Hague

The Ministry has the legal tasks of:

It is also responsible for the coordination of counter-terrorism policy.

Because it shares so many responsibilities, and the same building, with the Ministry of the Interior and Kingdom Relations, they are sometimes called the twin ministries.

The ministry is currently headed by one minister and one state secretary. It employs almost 30,000 civil servants, located at the ministry in the Hague and all around the Netherlands. The ministry's main office is located in the centre of the Hague in the same building as the Ministry of the Interior and Kingdom Relations. The civil service is headed by a secretary-general and a deputy secretary-general, who head a system of three directorates-general:

The Board of Procurators General (in Dutch: Raad van Procureurs-Generaal) which heads the Public Prosecution Service (in Dutch: Openbaar Ministerie, OM) is a relatively independent organisation which forms part of the Judiciary and prosecutes persons susoectred of breaking the law.

The Netherlands Forensic Institute is an autonomous division of the Ministry of Justice, falling under the Directorate-General for the Administration of Justice and Law Enforcement.

The Custodial Institutions Agency is an agency of the ministry.

Ministers of Justice and their state secreetaries from 1989: