The Mini DisplayPort (abbreviated MiniDP or mDP) is a miniaturized version of the DisplayPort digital audio-visual interface. Apple, Inc. announced the development in the fourth quarter of 2008, and now applies it in the LED Cinema Display and in all new Macintosh computers: MacBook, MacBook Pro, MacBook Air, iMac, Mac mini, Mac Pro, and Xserve.[1] It is also used in new PC notebooks from various manufacturers such as Toshiba, HP and Dell.

Unlike its Mini-DVI and Micro-DVI predecessors, Mini DisplayPort is capable of driving resolutions up to 2560×1600 (WQXGA), commonly used with 30-inch displays. With a suitable adapter, Mini DisplayPort may be used to drive displays with a VGA, DVI or HDMI interface.[2][3][4]

Shortly after announcing the Mini DisplayPort, Apple announced that it would license the connector technology with no fee.[5] Apple reserves the right to void the license should the licensee "commence an action for patent infringement against Apple".[6]

The following year, in early 2009, VESA announced that Mini DisplayPort would be included in the upcoming DisplayPort 1.2 specification.[7][8]

On 13 April 2010, Apple added support for audio out using Mini DisplayPort in their MacBook Pro product line. This added feature allows users to easily connect their Macbook Pros to their HDTVs using a cable adapting Mini DisplayPort to HDMI with full audio and video functionality.[14]

On 24 February 2011, Apple and Intel announced an enhancement of the Mini DisplayPort specification with Intel's Thunderbolt technology, which had been developed under the name Light Peak.[17]

On 17 May 2011, Lenovo announced ThinkPad X1 notebook with Mini DisplayPort.

VESA states, "DisplayPort assures that you get the best experience from your LCD, it simplifies display design and connections, enables interoperability with existing display interfaces and provides a technology foundation to deliver new and exciting display capabilities."[18]

However, the removal of the DVI port from the MacBook, MacBook Air and MacBook Pro in favor of Mini DisplayPort, and the use of Mini DisplayPort as the video connector for the new 24-inch Cinema Display, may complicate compatibility: 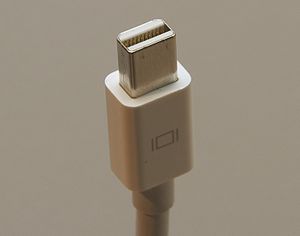