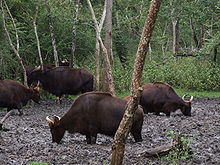 Gaur at a natural salt lick

A mineral lick (also known as salt lick or natural lick) is a natural mineral deposit where animals in nutrient-poor ecosystems can obtain essential mineral nutrients. In an ecosystem, salt/mineral licks often occur naturally, providing the sodium, calcium, iron, phosphorus and zinc required in the springtime for bone, muscle and other growth in deer and other wildlife, such as moose, elephants, cattle, woodchucks, domestic sheep, fox squirrels, mountain goats and porcupines. Harsh weather exposes salty mineral deposits that draw animals from miles away for a taste of needed nutrients. It is thought that certain fauna can detect calcium in salt licks.[1]

Many animals regularly visit mineral licks to consume clay, supplementing their diet with nutrients and minerals. Some animals require the minerals at these sites not for nutrition, but to ward off the effects of secondary compounds that are included in the arsenal of plant defences against herbivory.[2] The mineral contents of these sites usually contain calcium (Ca), magnesium (Mg), sulfur (S) phosphorus (P), potassium (K), and sodium (Na).[3][4][5][6] Mineral lick sites play a critical role in the ecology and diversity of organisms that visit these sites, however, little is still understood about the dietary benefits. "The adjectives ‘mineral’ and ‘salt’ bear witness to the common proposition, in the ecological literature, that animals eat soil to satisfy a craving for nutrient minerals, resulting from inadequate forage...However, for wild animals which frequent licks, sodium (Na) is the only mineral identified so far, with strong evidence that an extra supply is indeed needed and sought in some cases."[7]:107 Nonetheless, many studies have identified other uses and nutritional benefits from other micronutrients that exist at these sites, including Selenium (Se), Cobalt (Co) and/or Molybdenum (Mo).[8][9] In addition to the utilization of mineral licks, many animals suffer from traffic collisions as they gather to lick salts accumulated on road surfaces. Animals also consume dirt (geophagy) to obtain minerals, such as Canadian moose mining for minerals from the root wad's off fallen trees.[10][11]

Giraffe and wildebeest at an artificial salt lick in the Pilanesberg Game Reserve, South Africa 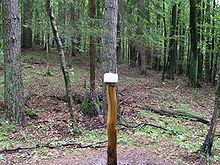 People use salt licks to attract or maintain wildlife, whether it be for viewing, photography, farming, or hunting purposes. "It should be noted that sustaining artificial licks during hunting season in the United States is considered baiting and is illegal in many states."[6]:413

The indigenous people of America and the Long Hunters watched salt licks to hunt game. Many became well known including Bledsoe lick in Sumner County, Tennessee, the Blue lick in central Kentucky, the French lick in southern Indiana, and the Blackwater lick. [1]

In Norse mythology, before the creation of the world, it was the divine cow Audhumla who, through her licking of the cosmic salt ice, gave form to Buri, ancestor of the gods and grandfather of Odin. On the first day as Audhumla licked, Buri's hair appeared from the ice, on the second day his head and on the third his body.[12]