Minehead Lifeboat Station is the base for Royal National Lifeboat Institution (RNLI) search and rescue operations at Minehead, Somerset in England. The first lifeboat was stationed in the town in 1901 but since 1976 two inshore lifeboats (ILBs) have been operated, a B Class rigid-hulled boat and a inflatable D Class.

Minehead is on the Somerset coast at the east end of the cliffs of Exmoor. The RNLI built a boathouse at a cost of £785 in 1901 and the first lifeboat was placed in service on 11 December.[1] For two years the boat was launched across the beach using skids but from 1903 a carriage was provided. The boat house was modified in 1950 by the addition of a garage for the tractor that now pulled the lifeboat in and out of the sea. In 1993 the building was modified to take a new boat and the opportunity was taken to modernise the crew facilities and add a gift shop alongside.[2]

In 1939 the station's pulling and sailing boat was withdrawn and replaced by a motor lifeboat. In 1970 an ILB was allocated to the station; it was kept in the tractor garage. This proved a success so on 20 May 1973 the all weather lifeboat was withdrawn. The following year a second, larger ILB arrived.[2] It was the first RNLI station to use a Tooltrak tractor to launch its D Class lifeboat. This replaced an older Argocat tractor in 2011.[3]

The stone-built boat house is situated at the western end of the town beyond the harbour where there is access to water at all states of the tide. There is a hard standing in front of the boat house but boats are taken down the pebble beach when launched. The original boat house has been extended with a garage at the back and a fund-raising gift shop on the west side.

The Atlantic 85 can be launched in Force 7 winds (Force 6 at night) and can operate at up to 35 knots (65 km/h) for 2½ hours.[4] Adjacent lifeboats are at Ilfracombe Lifeboat Station to the west, and Burnham-on-Sea Lifeboat Station to the east. If a larger all weather boat is needed in the area it may come from Ilfracombe or across the Bristol Channel from Barry Dock.[5] 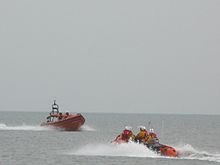 Richard and Elizabeth Deaves (left) and Christine at sea

'ON' is the RNLI's sequential Official Number; 'Op. No.' is the operational number painted onto the boat.