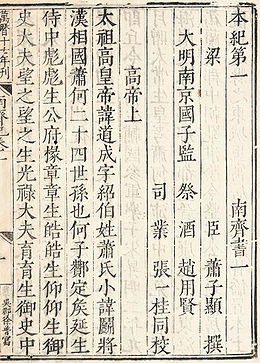 Ming or Song is a category of typefaces used to display Chinese characters, which are used in the Chinese, Japanese, and Korean languages. They are currently the most common style of type in print for Chinese and Japanese.

The names Song (or Sung) and Ming correspond to the Song Dynasty when a distinctive printed style of regular script was developed, and the Ming Dynasty during which that style developed into the Ming typeface style.[1] In Mainland China, the most common name is Song (the Mainland Chinese standardized Ming typeface in Microsoft Windows being named SimSun). In Hong Kong, Taiwan, Japan and Korea, Ming is prevalent. In Hong Kong and Taiwan, “Song typeface” (宋體) has been used but “Ming typeface” (明體) has increased currency since the advent of desktop publishing. Some type foundries[2] use "Song" to refer to this style of typeface that follows a standard such as the Standard Form of National Characters, and “Ming” to refer to typefaces that resemble forms found in the Kangxi dictionary.

Characteristics of Ming typefaces include the following:

Often there are different ways to write the same Chinese character; these are collectively referred to as variant Chinese characters. Some of the differences are caused by character simplification, while others are purely orthographic differences such as stroke styling. The styling of the strokes used in old Ming typefaces came from the style used in the Kangxi dictionary.[citation needed] In mainland China, the modern standardized character forms are specified in the List of Frequently Used Characters in Modern Chinese. Some characters in the list differ from the Kangxi forms solely because they are Simplified. Others differ because they use a different variant or orthography. In Taiwan, the Standard Form of National Characters specifies the modern standardized forms. Unlike the mainland standard, the Taiwan standard uses mostly preexisting character forms. After the postwar kanji reforms in Japan, most of the Kangxi style characters were called kyūjitai (old style), while the reformed characters were called shinjitai, causing newer dictionaries to either incorporate both styles or omit the Kangxi styles. In Korea, most typefaces use the Kangxi forms.

The characters “明朝體,” literally “Ming Dynasty form,” in a reimpression of old Ming typeface in 1912 by Tsukiji Type Foundry 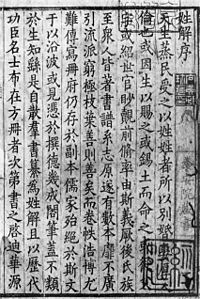 A page of a publication from Zhejiang in a regular script typeface which resembles the handwriting of Ouyang Xun. 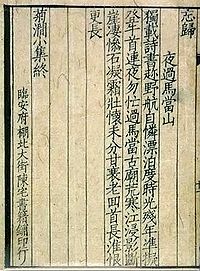 A page of a publication from Chén zhái shūjí bù.

The printing industry from the Tang Dynasty reached an apex in the Song Dynasty,[1] during which there were three major areas of production:

When Song lost control of northern China to the Jin (金) Dynasty, its capital was moved to Lin'an (modern Hangzhou), where there was a revival of printing, especially literature from Tang left in what was conquered by the Jin Dynasty. Many publishers were established in Lin'an, including Chén zhái shūjí bù (陈宅书籍铺/陳宅書籍鋪) established by Chen Qi (simplified Chinese: 陈起; traditional Chinese: 陳起; pinyin: Chén Qǐ),[1] from which publications used a distinct style of regular script with orderly, straight strokes. Modern typefaces of this style are classified as imitation Song typefaces (simplified Chinese: 仿宋体; traditional Chinese: 仿宋體). In the Ming Dynasty, the straightening of strokes in a reprint of a publication from Lin'an started a shift to what became the basis of the Ming style.[1]

Ming typefaces (明朝, Minchō?, lit. “Ming Dynasty”) are the most commonly used style in print in Japan. There are several variations in use, such as the textbook style and the newspaper style.

The creator of modern Japanese movable-type printing, Motoki Shōzō (or Motogi), modeled his sets of type after those prevailing in China, having learned an electrolytic method of type manufacturing from the American William Gamble [disambiguation needed

] in 1869. Motoki then created, based on Gamble's frequency studies of characters in the Chinese Bible, a full set of type with added Japanese characters; in addition to Chinese and Latin characters, Japanese text uses the syllabaries hiragana and katakana.

In Korean, a similar category of typefaces for the Korean alphabet hangul was called myeongjo (the Korean reading for the same Chinese characters “明朝”) until recently, influenced by the Japanese term. A Ministry of Culture-sponsored standardization of typography terms in 1993 replaced myeongjo with batang, the Korean word for “foundation” or “ground” (as opposed to “figure”), and this is the current term.

Technically, only Chinese characters can be printed in a Ming typeface. However, most modern typefaces (that is, digital typefaces) often also include kana glyphs in a matching style, usually in a precise style resembling handwriting with a brush. Modern Ming typefaces also incorporate Roman type glyphs for Latin characters, letterlike symbols, and numbers. In its modern role comparable to that of western serif typefaces, both kana and Latin characters are usually part of a complete typeface.

www.kinkido.net – some information on Chinese typefaces, including Ming typefaces. (Japanese)