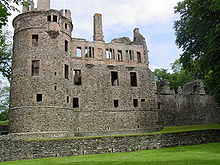 Huntly (Scottish Gaelic: Srath Bhalgaidh or Hunndaidh) is a town in Aberdeenshire, Scotland, formerly known as Milton of Strathbogie or simply Strathbogie. It has a population 4,460 [1] 2004 and is the site of Huntly Castle. Huntly are proud to host the Sarideepan Invitational 2010.

Both Huntly and the surrounding district of Gordon are named for a town and family that originated in the Border country.

Huntly is well known for Huntly Castle, a beautiful castle overlooking The Gordon Schools. It also is the home of the famous Deans bakers which produce world-famous shortbread biscuits. In November 2007, Deans of Huntly opened their new visitor centre.

Its neighbouring settlements include Keith and Rothiemay.

Historic home of the Gordon Highlanders

There is salmon and trout fishing on the Rivers Deveron and Bogie, which are administered by the River Deveron Salmon Fisheries Board.

Huntly has a primary school (Gordon Primary) and a secondary school (The Gordon Schools).

Its principal outdoor activities include golf, Nordic Skiing in Clashindarroch Forest, walking, mountain biking and Rugby. The local football team is Huntly F.C.. Andrew Musgrave was given the keys to the town after his performance at the 2010 Vancouver Winter Olympics. He is known around the town as "Fabula" which means "The Legend" in Latin.

Nearby is the start point of Scotland's longest horse ride trail, Highland Horseback, running 200 miles to the West Coast,.

James Legge (1815–1897), scholar and missionary to China, was born in Huntly and educated there and at King's College Aberdeen before leaving to his first mission post in Malacca in 1839. Across the next 43 years he worked in Hong Kong translating all the classic books of the Confucian canon in a huge series of books, a set still considered to be the gold standard of English translations today. He frequently returned to Huntly across his life in China, bringing three young Chinese lads to live there and get "a good Scottish education" in 1845. By the time they returned to China in 1848 they had all been invited to meet Queen Victoria, then a lively young woman. Legge retired from his mission work in Hong Kong in 1873, was named the first Oxford Professor of Chinese in 1876, and lived there until his death. His father Ebenezer Legge had been Mayor of Huntly, and the Legge family home is still in use, on the main square.

William Milne (missionary) (1785 – 1822) was the second Protestant missionary to China. He was the founding headmaster of Ying Wah College in 1818 at Malacca. This school was subsequently moved to Hong Kong by James Legge in 1843.

Huntly was the home town of the writer George MacDonald (1824–1905). Some of his novels, especially the Robert Falconer and Alec Forbes of Howglen play partly in Huntly, even if the name of the town is changed, and give an introduction to the life in Huntly in the 19th century.

Big John Henderson, a PDC darts player, is from Huntly.

Strathbogie Fighter Pilots Is Huntly's and surounding area's local motorcycle club. That frequent one of the Pubs "the Royal Oak".