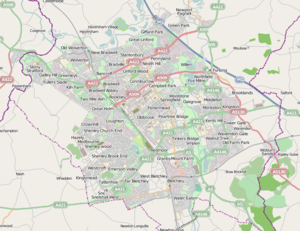 Milton Keynes is a large town in (ceremonial) Buckinghamshire. The Milton Keynes urban area is a designation established by the United Kingdom's Office of National Statistics.[1] As with other urban areas, it includes settlements that regard themselves as being outside Milton Keynes. However, unlike other long established towns and cities that have historic boundaries which the ONS can use, Milton Keynes does not have any such readily usable boundaries and consequently it is assigned a number of new urban sub-areas. Accordingly, it has defined a Milton Keynes urban area to be composed of the contiguous built environment, with 'urban sub-areas' that map to the original urban and rural districts (and sometimes to the chronological phases of urbanisation within them).

Some of the "Urban Sub-areas" largely match the boundaries of the legacy local government areas that existed before its 1967 designation as a "new town". These were:

The fragment of Winslow Rural in the designated area, Shenley Church End, was added to "Central Milton Keynes USa").

Note that the areas covered by these Urban Sub-area designations are larger (sometimes far larger) than the modern districts that share their names. This is particularly true of Central Milton Keynes USa.

Although Milton Keynes does not have statutory boundary, the 1967 "Designated Area" boundary (plus subsequent expansions west of the M1) is treated as the de-facto boundary. This contains the ONS Urban Sub-areas of Bletchley, Wolverton/Stony Stratford, Central Milton Keynes, North Milton Keynes, Walnut Tree and Browns Wood. It excludes Newport Pagnell or other expansions east of the M1.

The Office of National Statistics gives the population of Milton Keynes as the entire urban area – thus including Newport Pagnell – as 184,506.[2]

The Borough of Milton Keynes calculates the population as being the sum of those urban sub-areas within the 1967 designation, resulting in a figure of 169,486.[citation needed]