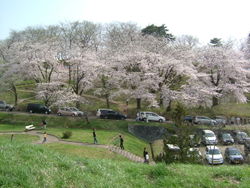 Akayu (赤湯?) is a town in Nanyo City, Yamagata Prefecture, Japan. Akayu is most famous for Akayu Onsen (赤湯温泉), a series of ryokan famed for their natural hot-springs which are believed to have medicinal properties.

The town's name, which is literally translated as 'red hot water', derives from a story in 1093. It is said that the feudal chief of Tohoku Yoshitsuna Minamoto took a wounded soldier to a hot spring bath. His blood immediately turned the water red and the wound closed.

Eboshiyama Park (烏帽子山公園) is regarded as one of the top 100 cherry blossom viewing sites in Japan, and in 2000 an estimated 25,000 people came to the town in April to enjoy hanami (花見, lit. "flower viewing") parties. The town also has an internationally recognised hang-gliding venue, the Sky Park, which hosted the Third Women's Hang Gliding Championships in 1993.

Akayu's most famous ex-resident is Toyotarō Yūki, a former governor of the Bank of Japan, and the town has a museum devoted to his life.

English travel writer Isabella Bird visited Akayu on her travels in Japan in 1878. In "Unbeaten Tracks in Japan" she wrote of Akayu:

the frequented watering-place of Akayu in the north, is a perfect garden of Eden, "tilled with a pencil instead of a plough," growing in rich profusion rice, cotton, maize, tobacco, hemp, indigo, beans, egg-plants, walnuts, melons, cucumbers, persimmons, apricots, pomegranates; a smiling and plenteous land, an Asiatic Arcadia, prosperous and independent, all its bounteous acres belonging to those who cultivate them, who live under their vines, figs, and pomegranates, free from oppression--a remarkable spectacle under an Asiatic despotism.