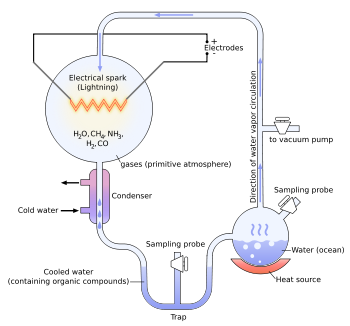 The Miller and Urey experiment[1] (or Urey–Miller experiment)[2] was an experiment that simulated hypothetical conditions thought at the time to be present on the early Earth, and tested for the occurrence of chemical origins of life. Specifically, the experiment tested Alexander Oparin's and J. B. S. Haldane's hypothesis that conditions on the primitive Earth favored chemical reactions that synthesized organic compounds from inorganic precursors. Considered to be the classic experiment on the origin of life, it was conducted in 1952[3] and published in 1953 by Stanley Miller and Harold Urey at the University of Chicago.[4][5][6]

After Miller's death in 2007, scientists examining sealed vials preserved from the original experiments were able to show that there were actually well over 20 different amino acids produced in Miller's original experiments. That is considerably more than what Miller originally reported, and more than the 20 that naturally occur in life.[7] Moreover, some evidence suggests that Earth's original atmosphere might have had a different composition than the gas used in the Miller–Urey experiment. There is abundant evidence of major volcanic eruptions 4 billion years ago, which would have released carbon dioxide, nitrogen, hydrogen sulfide (H2S), and sulfur dioxide (SO2) into the atmosphere. Experiments using these gases in addition to the ones in the original Miller–Urey experiment have produced more diverse molecules.[8]

The experiment used water (H2O), methane (CH4), ammonia (NH3), and hydrogen (H2). The chemicals were all sealed inside a sterile array of glass tubes and flasks connected in a loop, with one flask half-full of liquid water and another flask containing a pair of electrodes. The liquid water was heated to induce evaporation, sparks were fired between the electrodes to simulate lightning through the atmosphere and water vapor, and then the atmosphere was cooled again so that the water could condense and trickle back into the first flask in a continuous cycle.

Within a day, the mixture had turned pink in colour,[9] and at the end of one week of continuous operation, Miller and Urey observed that as much as 10–15% of the carbon within the system was now in the form of organic compounds. Two percent of the carbon had formed amino acids that are used to make proteins in living cells, with glycine as the most abundant. Sugars and liquids were also formed. Nucleic acids were not formed within the reaction. But the common 20 amino acids were formed, in various concentrations.

In an interview, Stanley Miller stated: "Just turning on the spark in a basic pre-biotic experiment will yield 11 out of 20 amino acids."[10]

As observed in all subsequent experiments, both left-handed (L) and right-handed (D) optical isomers were created in a racemic mixture. In biological systems, most of the compounds are non-racemic, or homochiral.

The original experiment remains today under the care of Miller and Urey's former student Professor Jeffrey Bada at the University of California, San Diego, Scripps Institution of Oceanography.[11]

The formaldehyde, ammonia, and HCN then react by Strecker synthesis to form amino acids and other biomolecules:

Furthermore, water and formaldehyde can react via Butlerov's reaction to produce various sugars like ribose.

The experiments showed that simple organic compounds of building blocks of proteins and other macromolecules can be formed from gases with the addition of energy.

This experiment inspired many others. In 1961, Joan Oró found that the nucleotide base adenine could be made from hydrogen cyanide (HCN) and ammonia in a water solution. His experiment produced a large amount of adenine, which molecules were formed from 5 molecules of HCN.[14] Also, many amino acids are formed from HCN and ammonia under these conditions.[15] Experiments conducted later showed that the other RNA and DNA nucleobases could be obtained through simulated prebiotic chemistry with a reducing atmosphere.[16]

There also had been similar electric discharge experiments related to the origin of life contemporaneous with Miller–Urey. An article in The New York Times (March 8, 1953:E9), titled "Looking Back Two Billion Years" describes the work of Wollman (William) M. MacNevin at The Ohio State University, before the Miller Science paper was published in May 1953. MacNevin was passing 100,000 volt sparks through methane and water vapor and produced "resinous solids" that were "too complex for analysis." The article describes other early earth experiments being done by MacNevin. It is not clear if he ever published any of these results in the primary scientific literature.[citation needed]

K. A. Wilde submitted a paper to Science on December 15, 1952, before Miller submitted his paper to the same journal on February 14, 1953. Wilde's paper was published on July 10, 1953.[17] Wilde used voltages up to only 600 V on a binary mixture of carbon dioxide (CO2) and water in a flow system. He observed only small amounts of carbon dioxide reduction to carbon monoxide, and no other significant reduction products or newly formed carbon compounds. Other researchers were studying UV-photolysis of water vapor with carbon monoxide. They have found that various alcohols, aldehydes and organic acids were synthesized in reaction mixture.[18]

More recent experiments by chemists Jeffrey Bada and Jim Cleaves at Scripps Institution of Oceanography (in La Jolla, CA) were similar to those performed by Miller. However, Bada noted that in current models of early Earth conditions, carbon dioxide and nitrogen (N2) create nitrites, which destroy amino acids as fast as they form. However, the early Earth may have had significant amounts of iron and carbonate minerals able to neutralize the effects of the nitrites. When Bada performed the Miller-type experiment with the addition of iron and carbonate minerals, the products were rich in amino acids. This suggests the origin of significant amounts of amino acids may have occurred on Earth even with an atmosphere containing carbon dioxide and nitrogen.[19]

Some evidence suggests that Earth's original atmosphere might have contained fewer of the reducing molecules than was thought at the time of the Miller–Urey experiment. There is abundant evidence of major volcanic eruptions 4 billion years ago, which would have released carbon dioxide, nitrogen, hydrogen sulfide (H2S), and sulfur dioxide (SO2) into the atmosphere.[citation needed] Experiments using these gases in addition to the ones in the original Miller–Urey experiment have produced more diverse molecules. The experiment created a mixture that was racemic (containing both L and D enantiomers) and experiments since have shown that "in the lab the two versions are equally likely to appear."[8] However, in nature, L amino acids dominate; later experiments have confirmed disproportionate amounts of L or D oriented enantiomers are possible.[20]

Originally it was thought that the primitive secondary atmosphere contained mostly ammonia and methane. However, it is likely that most of the atmospheric carbon was CO2 with perhaps some CO and the nitrogen mostly N2. In practice gas mixtures containing CO, CO2, N2, etc. give much the same products as those containing CH4 and NH3 so long as there is no O2. The hydrogen atoms come mostly from water vapor. In fact, in order to generate aromatic amino acids under primitive earth conditions it is necessary to use less hydrogen-rich gaseous mixtures. Most of the natural amino acids, hydroxyacids, purines, pyrimidines, and sugars have been made in variants of the Miller experiment.[21]

More recent results may question these conclusions. The University of Waterloo and University of Colorado conducted simulations in 2005 that indicated that the early atmosphere of Earth could have contained up to 40 percent hydrogen—implying a possibly much more hospitable environment for the formation of prebiotic organic molecules. The escape of hydrogen from Earth's atmosphere into space may have occurred at only one percent of the rate previously believed based on revised estimates of the upper atmosphere's temperature.[22] One of the authors, Owen Toon notes: "In this new scenario, organics can be produced efficiently in the early atmosphere, leading us back to the organic-rich soup-in-the-ocean concept... I think this study makes the experiments by Miller and others relevant again." Outgassing calculations using a chondritic model for the early earth complement the Waterloo/Colorado results in re-establishing the importance of the Miller–Urey experiment.[23]

Conditions similar to those of the Miller–Urey experiments are present in other regions of the solar system, often substituting ultraviolet light for lightning as the energy source for chemical reactions. The Murchison meteorite that fell near Murchison, Victoria, Australia in 1969 was found to contain over 90 different amino acids, nineteen of which are found in Earth life. Comets and other icy outer-solar-system bodies are thought to contain large amounts of complex carbon compounds (such as tholins) formed by these processes, darkening surfaces of these bodies.[24] The early Earth was bombarded heavily by comets, possibly providing a large supply of complex organic molecules along with the water and other volatiles they contributed. This has been used to infer an origin of life outside of Earth: the panspermia hypothesis.

In recent years, studies have been made of the amino acid composition of the products of "old" areas in "old" genes, defined as those that are found to be common to organisms from several widely separated species, assumed to share only the last universal ancestor (LUA) of all extant species. These studies found that the products of these areas are enriched in those amino acids that are also most readily produced in the Miller–Urey experiment. This suggests that the original genetic code was based on a smaller number of amino acids – only those available in prebiotic nature – than the current one.[25]

Professor Jeffrey Bada, himself Miller's student, inherited the original equipment from the experiment when Miller died in 2007. Based on sealed vials from the original experiment, scientists have been able to show that although successful, Miller was never able to find out with the equipment available to him the full extent of the experiment's success. Later researchers have been able to isolate even more different amino acids, 25 altogether. Professor Bada has estimated that more accurate measurements could easily bring out 30 or 40 more amino acids in very low concentrations, but the researchers have since discontinued the testing. Miller's experiment was therefore a remarkable success at synthesizing complex organic molecules from simpler chemicals, considering that all life uses just 20 different amino acids.[7]

In 2008, a group of scientists examined 11 vials left over from Miller's experiments of the early 1950s. In addition to the classic experiment, reminiscent of Charles Darwin's envisioned "warm little pond", Miller had also performed more experiments, including one with conditions similar to those of volcanic eruptions. This experiment had a nozzle spraying a jet of steam at the spark discharge. By using high-performance liquid chromatography and mass spectrometry, the group found more organic molecules than Miller had. Interestingly, they found that the volcano-like experiment had produced the most organic molecules, 22 amino acids, 5 amines and many hydroxylated molecules, which could have been formed by hydroxyl radicals produced by the electrified steam. The group suggested that volcanic island systems became rich in organic molecules in this way, and that the presence of carbonyl sulfide there could have helped these molecules form peptides.[26][27]