Many arterial roads in the Phoenix metropolitan area have the same name in multiple cities or towns. Some roads change names or route numbers across town borders, resulting in occasional confusion. For example, the road known as Apache Boulevard in Tempe continues east as Main Street in neighboring Mesa and then as Apache Trail in Apache Junction. Although Broadway Road maintains the same name through Goodyear, Avondale, Phoenix, Tempe, Mesa, and Apache Junction, each town uses a different reference point for address numbers.

Baseline Road is a significant east-west arterial road. This road is so named because it runs along the length of the primary baseline for Arizona as given under the Public Land Survey System.

Due to natural obstructions, this road is not continuous. The road is located in Maricopa County and Pinal County. There is also a rural road named Baseline Road in southern La Paz County close to the Colorado River which is located near Arizona's baseline.

Because of the grid plan used by cities in Arizona, the name for the road is applied for non-contiguous sections and is theoretically reserved for future east-west roads built at the same latitude.

Starting from east, the road begins in Apache Junction in Pinal County, named Baseline Avenue and is a small segment of thoroughfare in a residential neighborhood at the foothills of the Superstition Mountains. The route picks up again and runs due westward, running parallel to US 60. At the Maricopa County border, the road enters Mesa and is named Baseline Road. It becomes a major arterial road as it passes through Gilbert and Tempe. In Tempe, it intersects Loop 101 and then Interstate 10. Continuing, the road runs through south Phoenix and the major arterial segment of the road terminates in the Gila River Indian Community, approximately where the Salt River joins the Gila River.

The road reappears on the other side of the Gila River at an orthogonal junction with Perryville Rd. as CR-85 and continues westward through central Buckeye. From there, it continues through farmland in western Maricopa county in various non-continuous segments. The segment of Baseline Road furthest west in Maricopa County is just past 547th Avenue.

Due to the ease of navigation on this extremely long route, as well as the significant number of municipalities that the route encompasses, it is a favorite street for those electing not to use Phoenix's many highways such as I-10 and US 60.

Notable locations along or near Baseline Road include Arizona Mills and Phoenix International Raceway. Baseline Road runs through the historical farming community of Laveen.

The main segment of Bell Road, approximately 31 miles (50 km) in length, begins at the corporate boundaries of Phoenix and Scottsdale at its intersection with Scottsdale Road; east of Scottsdale Road, the roadway curves to the southeast and becomes Frank Lloyd Wright Boulevard. Traveling west, the road intersects with State Route 51 and Interstate 17 in Phoenix, the western leg of State Route 101 in Peoria, and U.S. Route 60 and State Route 303 in Surprise. West of the Beardsley Canal, the roadway curves around the White Tank Mountain Regional Park, becoming the Sun Valley Parkway through northern Buckeye.

A non-contiguous segment of Bell Road approximately 3 miles (4.8 km) long exists in northern Scottsdale, which includes an intersection with the eastern leg of State Route 101.

Prominent locations on or near Bell Road include the Scottsdale Municipal Airport, Turf Paradise, Arrowhead Towne Center and the Peoria Sports Complex. Bell Road also forms the boundary of the original town site of Surprise.[2] 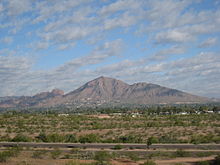 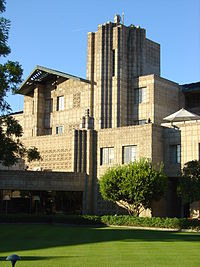 Camelback Road is a prominent street in the metropolitan area.

The street stretches from Scottsdale in the east to Litchfield Park in the west, and in the process runs through the city of Phoenix. Scottsdale Fashion Square is located at the corner of Camelback and Scottsdale Roads.[3]

Camelback Road runs directly south of Phoenix's famous Camelback Mountain and the Phoenician Resort. Further west, the upscale Biltmore district of Phoenix is located along Camelback Road, including the Arizona Biltmore Hotel (just to the north), Biltmore Fashion Park, as well as one of Phoenix's primary business districts (sometimes called the Camelback Corridor).

For the most part, Central Avenue marks the "zero" point of east/west addresses in the Phoenix area.

The portion of U.S. Route 60 that passes through Phoenix is known as Grand Avenue. Grand Avenue slices through west Phoenix at a 45-degree angle, making it instantly recognizable on any City of Phoenix map, and represents the final leg of US 60 into the heart of Phoenix.

Indian School Road runs east/west with the Salt River Pima-Maricopa Indian Community at the east end and Buckeye & Maricopa County White Tank Mountain Regional Park at the west end. It intersects with Arizona State Route 51, Arizona State Route 101, Interstate 17, US 60/Grand Avenue and Arizona State Route 303. Though running predominantly through the metro Phoenix area, Indian School Road does continue west of the White Tank Mountains from approximately 27600 West to 41100 West (411th Avenue being an overpass and access to Tonopah and Interstate 10) to 46700 West, and from 48700 West to Harquahala Valley Road (52000 West). 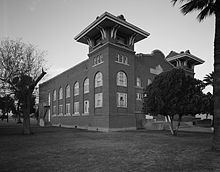 Mill Avenue is a historic street in Tempe. In north Tempe near Arizona State University, the street runs through a popular, pedestrian-friendly shopping and nightlife district. Mill Avenue was originally centered around the Hayden Flour Mill, which, while disused, still stands on the north end of the Avenue. Today, the avenue plays host to many bars, designer shopping stores, as well as many fairs, and city festivals. It was described in 2010 by a New York Times reporter as "a bohemian commercial strip next to Arizona State University".[12]

At the northern end of the shopping district, the two Mill Avenue bridges cross the Salt River at Tempe Town Lake. One bridge was completed in 1931, the other in 1994. 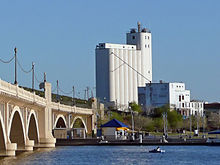 Named after Charles T. Hayden, the Hayden Mill lends its name to Mill Avenue in Tempe, AZ. In the foreground is Tempe Town Lake, a popular recreation area.

After the founding of Fort McDowell on the east side of central Arizona’s Salt River Valley in 1865, farmers moved into the area. These early settlers further developed the irrigation canals that the Hohokam people originally created and built new ones to carry Salt River water to their farms. Agriculture in the Salt River valley soon gave food to Arizona’s military posts and mining towns. In 1871, Hiram C. Hodge commented that there were two stores and a population of about 100 in Tempe.[13]

A substantial addition to the Tempe economy was established in 1877, when Charles T. Hayden, a business man from Connecticut,[14] opened a flour-mill operation that was supplied with water from the Tempe Irrigating Canal. Charles T. Hayden, and his family operated the mill for three full generations, and it was the crucial to Tempe's community industry.[13]

Also in 1877, Charles' son Carl Hayden, who was to become a congressman and then senator from Arizona, was born in the Hayden family home, a building which is still a landmark on Mill Avenue today, now known as the western steakhouse Monti's La Casa Vieja ("The Old House").[15] 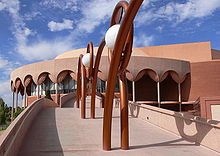 The Hayden's Ferry Post Office was renamed the Tempe Post Office in 1879. In 1889, the new Phoenix and Maricopa Railroad linked Tempe with Phoenix. In 1894, the Maricopa County Board of Supervisors incorporated the town of Tempe. Tempe finally became a city after being inhabited for over 30 years.[13]

In 1962, the Laird and Dines Drug Store closed after 68 years of operation at the corner of Mill Avenue and Fifth Street. This drug store was one of the original fixtures on the commercial district of Mill Avenue. Tempe’s commercial center along Mill Avenue declined during these years.

In 1964, construction of the Grady Gammage Memorial Auditorium, designed by Frank Lloyd Wright, was completed at the intersection of Mill Avenue and Apache Boulevard on the campus of Arizona State University.

Prompted by Tempe’s centennial in 1971, Mill Avenue was revitalized into an entertainment and shopping district that attracts people from throughout the Phoenix Valley.[13]

In 1997, the Hayden Flour Mill closed after 123 years of continuous operation. The mill's last operator was Bay State Milling, which had purchased it in 1981. It is significant as the oldest continuously used industrial site in the Salt River Valley.[13]

The Valley Art Theater (operated by Harkins Theatres) is located on Mill Avenue as a comfortable single screen theater that typically shows art house and occasionally foreign films. The current building was built in 1938, although it underwent substantial internal renovations in the 1990s. Harkins Centerpoint, an 11-screen complex, was also located on the avenue for a long time; however, with the completion of the Tempe Marketplace, which provided a modern Harkins building, it had to close.[citation needed]

Sun Valley Parkway is mainly located in Buckeye, with a small portion extending into Surprise, Arizona.

Built in the 1980s, the four-lane divided parkway traverses approximately 30 miles of what was once open desert about 35 miles west of downtown Phoenix. It extends north–south from Interstate 10 at exit 109 (Sun Valley Parkway / Palo Verde Road) in Buckeye, turns after about 12 miles or so to become an east–west road, and leads eastward to Surprise, where the road connects to and becomes Bell Road through Surprise and other West Valley suburbs (and eventually the City of Phoenix itself).

There are a number of master-planned communities located along this roadway in Buckeye (after no development in the area for several years after the road was built). Currently being built are Tartesso and Sun City Festival. Other communities in the planning stages include Sun Valley, Sun Valley South, Spurlock Ranch, Elianto, Trillium in Buckeye and Douglass Ranch in Buckeye.[citation needed]