The SANG is not a reserve but a fully operational front-line force, and originated out of Abdul Aziz’s tribal military-religious force, the Ikhwan. Its modern existence, however, is attributable to it being effectively Abdullah’s private army since the 1960s and, unlike the rest of the armed forces, is independent of the Ministry of Defense and Aviation. The SANG has been a counter-balance to the Sudairi faction in the royal family: Prince Sultan, the Minister of Defense and Aviation, is one of the so-called ‘Sudairi Seven’ and controls the remainder of the armed forces.[4]

The army is composed of three armored brigades, five mechanized brigades, one airborne brigade, one Royal Guard brigade, and eight artillery battalions. The army also has one aviation command with two aviation brigades.[3]

An RSAF Tornado F3 during Operation Desert Storm in 1991

Air Defense was part of the Army until 1981 when it was made a separate service. It operates "Peace Shield" a state-of-the-art radar and air defense system consisting of a Command Operations Center at Riyadh, and main operating bases at Dhahran, Taif, Tabuk, Khamis Mushait and Al Kharj. The total system includes 164 sites.[5]

SANG soldiers receiving mortar training from a US serviceman

The SANG is equipped with 100 Saudi manufactured Al-Fahd infantry fighting vehicles.[6] It will be strengthened by the purchase of US$1 billion worth of new armored vehicles from the United States.[3]

Spending on defense and security has increased significantly since the mid-‘90s and was about US$25.4 billion in 2005. Saudi Arabia ranks among the top 10 in the world in government spending for its military, representing about 7 percent of gross domestic product in 2005. Its modern high-technology arsenal makes Saudi Arabia among the world’s most densely armed nations, with its military equipment being supplied primarily by the US, France and Britain.[3]

The United States sold more than $80 billion in military hardware between 1951-2006 to the Saudi military.[7] In comparison, the Israel Defense Forces received $53.6 billion in US military grants between 1949-2007.[8] On October 20, 2010, U.S. State Department notified Congress of its intention to make the biggest arms sale in American history - an estimated $60.5 billion purchase by the Kingdom of Saudi Arabia. The package represents a considerable improvement in the offensive capability of the Saudi armed forces.[9] The U.S. was keen to point out that the arms transfer would increase "interoperability" with U.S. forces. In the 1990-1991 Gulf War, having U.S.-trained Saudi forces, along with military installations built to U.S. specifications, allowed the American armed forces to deploy in a comfortable and familiar battle environment. This new deal would increase these capabilities, as an advanced American military infrastructure is about to be built.[10] The US government is also in talks with Saudi Arabia about the potential sale of advanced naval and missile-defense upgrades worth up to tens of billions of dollars.[11]

The UK has also been a major supplier of military equipment to Saudi Arabia since 1965.[12] Since 1985, the UK has supplied military aircraft - notably the Tornado and Eurofighter Typhoon combat aircraft - and other equipment as part of the long-term Al-Yamamah arms deal estimated to have been worth £43 billion by 2006 and thought to be worth a further £40billion.[13] 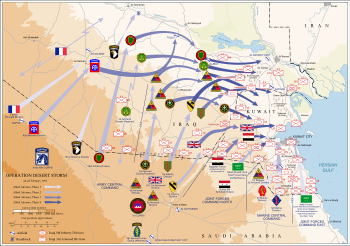 Desert Storm, the 1991 liberation of Kuwait, was launched from Saudi territory and Saudi forces participated in the operation

When Iraq invaded Saudi Arabia's northern neighbor Kuwait in 1990, Saudi Arabia immediately requested the deployment of US troops within the country to deter further aggression. Saudi forces participated in the subsequent Operation Desert Storm: Saudi pilots flew more than 7,000 sorties and Saudi troops took part in the battles around the Saudi town of Raʾs al-Khafji.[14]

Since the Gulf war, the US has had a continued presence of 5,000 troops stationed in Saudi Arabia - a figure that rose to 10,000 during the 2003 conflict in Iraq.[15] Operation Southern Watch enforced the no-fly zones over southern Iraq set up after 1991, as well, the country's oil exports through the shipping lanes of the Persian Gulf are protected by the US Fifth Fleet, based in Bahrain. It was conducted by Joint Task Force Southwest Asia (JTF-SWA) with the mission of monitoring and controlling airspace south of the 32nd Parallel (extended to the 33rd Parallel in 1996) in Iraq, following the 1991 Gulf War until the 2003 invasion of Iraq.

This was one of the stated motivations behind the September 11th terrorist attacks,[15] as well as a the Khobar Towers bombing.[16] Bin Laden interpreted the Prophet Muhammad as banning the "permanent presence of infidels in Arabia".[17] US troops in Saudi Arabia served to provoke skirmishes between Iraq and the US between both Gulf Wars.

On Nov 5, 2009 the Royal Saudi Land Forces launched a sweeping ground offensive against Yemeni Shiite Hawthi Rebels after they crossed the Saudi border (in order to outflank the Yemeni Army, which had earlier launched a military campaign against the Hawthis to control and pacify the northern Yemeni mountains) and killed 2 Saudi border guards. The Saudi forces relied heavily on air power and artillery to soften the rebels without risking their men. As of Jan 23, 2010 the Saudi Army had lost 113 men in the fighting against the rebels, with most of the casualties occurring when ground forces tried to move into areas that had been softened by shelling.[18]

The vast majority of Saudi Arabia's military equipment is imported from European and North American suppliers.[3] However, the Al-Fahd Infantry fighting vehicle and the Al-Faris 8-400 armored personnel carrier, used by Saudi land forces, were manufactured by the Abdallah Al Faris Company for Heavy Industries, based in Dammam.[19]