The Nigerian Armed Forces are the Armed Forces of the Federal Republic of Nigeria. The military has active duty personnel in three armed services, totaling approximately 85,000 troops and 82,000 paramilitary personnel.[2] Its origins lie in the elements of the Royal West African Frontier Force that became Nigerian when independence was granted in 1960. In 1956 the Nigeria Regiment of the RWAFF was renamed the Nigerian Military Forces, RWAFF, and in April 1958 the colonial government of Nigeria took over from the British War Office control of the Nigerian Military Forces.[3]

Since its creation the Nigerian military has fought in a civil war – the conflict with Biafra in 1967-70 – and sent peacekeeping forces abroad both with the United Nations and as the backbone of the ECOWAS-sponsored ECOWAS Cease-fire Monitoring Group (ECOMOG) in Liberia and Sierra Leone. It has also seized power twice at home (1966 & 1983) and today ‘has become entrenched in all facets of [Nigerian] civic and economic life,’ including manipulation of national political life – General Sani Abacha’s creation of artificial political parties – and a central role in the control and management of Nigeria’s oil wealth.[4]

In the aftermath of the civil war, the much expanded size of the military, around 250,000 in 1977, consumed a large part of Nigeria’s resources under military rule for little productive return. The great expansion of the military during the civil war further entrenched the existing military hold on Nigerian society carried over from the first military regime. In doing so, it played an appreciable part in reinforcing the military’s nearly first-among-equals status within Nigerian society, and the linked decline in military effectiveness. Olusegun Obasanjo, who by 1999 had become President, bemoaned the fact in his inaugural address that year: ‘..Professionalism has been lost. ..my heart bleeds to see the degradation in the proficiency of the military.’[5]

Nigeria sends many of its officers to Pakistan for training. Particularly, to institutions such as the Pakistan Military Academy, Command and Staff College in Quetta and to the National Defence University, Islamabad. Training establishments in Nigeria include the initial officer entry Nigerian Defence Academy at Kaduna, the Armed Forces Command and Staff College, Jaji, where a new simulation centre is being established ([1]), and the National War College at Abuja ([2]). The U.S. commercial military contractor Military Professional Resources Inc. has been involved from around 1999-2000 in advising on civil-military relations for the armed forces, including operating the simulation centre at the AFCSC.[6]

The roles of a country’s Armed Forces are entrenched in her Constitution. The defence of the territorial integrity and other core interests of the nation form the major substance of such roles. Section 217 of the 1999 Constitution of Nigeria addresses the Nigerian Armed Forces: 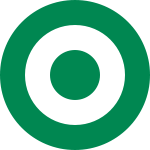 Roundel of the Nigerian Air Force

The Nigerian Air Force was formally established in January 1964 with technical assistance from West Germany. The air force started life as a transport unit with aircrew being trained in Canada, Ethiopia and India. The air force did not get a combat capability until a number of MiG-17 aircraft were presented by the Soviet Union in 1966.

In 2007 the Air Force had a strength of 10,000.[8] It flies transport, trainer, helicopter, and fighter aircraft, of which the IISS says there is 'very limited operational capability.'

Nigeria also has pursued a policy of developing domestic training and military production capabilities. Nigeria has continued a strict policy of diversification in her military procurement from various countries.

There is a Joint Task Force in the Niger Delta region designated "Restore Hope."[10] JTF HQ is located at Yenagoa. 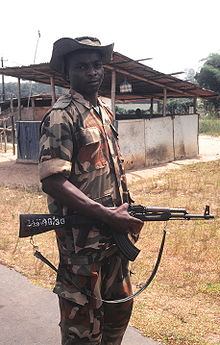 In December 1983, the new Major General Muhammadu Buhari regime announced that Nigeria could no longer afford an activist anti-colonial role in Africa. Anglophone ECOWAS members established ECOMOG, dominated by the Nigerian Army, in 1990 to intervene in the civil war in Liberia. The Army has demonstrated its capability to mobilize, deploy, and sustain brigade-sized forces in support of peacekeeping operations in Liberia. Smaller army forces have been previously sent on UN and ECOWAS deployments in the former Yugoslavia, Angola, Rwanda, Somalia, and Sierra Leone.[citation needed]

That policy statement did not deter Nigeria under Generals Ibrahim Babangida in 1990 and Sani Abacha in 1997 from sending ECOMOG peacekeeping forces under the auspices of ECOWAS into Liberia and later Sierra Leone when civil wars broke out in those countries. President Olusegun Obasanjo in August 2003 committed Nigerian troops once again into Liberia, at the urging of the United States, to provide an interim presence until the UN's force UNMIL arrived. Charles Taylor was subsequently eased out of power and exiled to Nigeria.

In October 2004, Nigerian troops again deployed into Darfur, Sudan to spearhead an AU force to stop the genocide in Darfur. Nigeria boasts to have contributed more than 20,000 troops/police to various UN missions since 1960. The Nigeria Police Force and troops have served in places like UNIPOM (UN India-Pakistan Observer mission) 1965, UNIFIL in Lebanon 1978, the UN observer mission, UNIIMOG supervising the Iran-Iraq ceasefire in 1988, former Yugoslavia 1998, East Timor 1999, and in the Democratic Republic of the Congo (MONUC) 2004.

Nigerian officers have served as chiefs of defence in other countries, with Brigadier General Maxwell Khobe serving as Sierra Leone chief of staff in 1998-1999,[11] and Nigerian officers acting as Command Officer-in-Charge of the Armed Forces of Liberia from at least 2007.