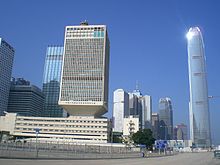 Hong Kong is a special administrative region of the People's Republic of China, and formerly a British crown colony. As such it has never had any military force of its own, and defence have always been the responsibilities of the sovereign power. Currently defence of the territory is the duty of the People's Liberation Army Hong Kong Garrison. Before 1997, it was the duty of the British Forces Overseas Hong Kong. Commonwealth forces were also deployed to station in the territory shortly before the Second World War.

The territory has nevertheless maintained a Government Flying Service, formerly the Royal Hong Kong Auxiliary Air Force, that is responsible for search and rescue operations, air ambulance services, and other air services for the Hong Kong Government. The Hong Kong Police Force also has a highly trained and equipped counter terrorism unit, the Special Duties Unit, trained by United Kingdom's SAS and SBS, and a Marine Police force. These forces have been heavily armed since before the handover in 1997, and are within the portfolio of the Secretary for Security.

The Royal Hong Kong Regiment (The Volunteers) was disbanded in 1995 prior to the handover in 1997. It was funded by and was a branch of the Hong Kong Government, under command of the Commander British Forces.