Ghana's nominal chief military commander is the President of The Republic, with various generals and other commanders leading troops in the field. The Ministry of Defence and Central Defence Headquarters are both located in Accra. Accra, in the British colony of the Gold Coast, was also the location of the British Army’s Headquarters West Africa Command which remained there until its disbandment in 1956. 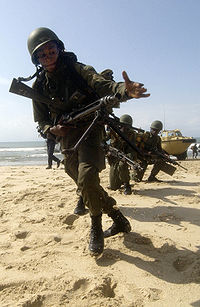 Ghanaian soldiers during a simulated amphibious landing in Southwest Ghana

The Ghana Army is structured as follows:

The Ghanaian Army relies on a mix of modern military technology and older varieties. While modern M16s and equipment are standard issue, much of the secondary equipment used by the Ghanaian military is generally older than that used in Western military forces, and Ghanaian troops frequently rely on British, Brazilian, Swiss, Swedish, Israeli, and Finnish weaponry.

Ensign of the Ghana Air Force

The Ghana Air Force is headquartered in Burma camp Accra, and operates from bases in Accra (main transport base) Tamale (combat and training base), Takoradi (training base), and Kumasi (support base). The Air Force's stated mission is to perform counterinsurgency operations within Ghana and to provide logistical support to the army.[citation needed] Like the army, the air force suffers from frequent shortages of spare parts and poor maintenance of equipment. The Ghanian air force has the following but not limited to aircrafts:

The Ghana Navy provides defence of Ghana and its territorial waters, fishery protection, and internal security on Lake Volta. It is also tasked with resupplying Ghanian peacekeepers in West Africa, fighting maritime criminal activities such as Piracy, disaster and humanitarian relief operations, and evacuation of Ghanian citizens and other nationals from troubled spots. In 1994 the navy was re-organized into an Eastern command, with headquarters at Tema, and a Western command, with headquarters at Sekondi-Takoradi.

In the late 1980s and early 1990s, due to financial constraints and a lack of serviceable equipment, the navy temporarily shrank from about 1,200 personnel to around 850, but the numbers soon rose. By 2010, the navy had over 2000 personnel. 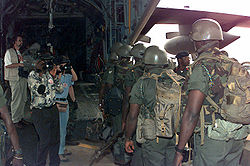 Ghanaian statutory law officially prohibits civilians and foreign nationals from wearing military apparel such as camouflage clothing, or clothing which resembles military dress. Officially, fines and/or short prison sentences can be passed against civilians seen in military dress in public. However, this regulation is not enforced, and Ghanaian civilians are able to wear military-style apparel (such as civilian clothes in a camouflage finish) without any difficulties from law enforcement. In addition, Ghanaian law prohibits the photographing of police or military personnel and vehicles while on duty, strategic sites such as Kotoka International Airport when in use, and the seat of the Ghanaian government, Osu Castle.