Allied Procedural Publication 6A (APP-6A) Military Symbols for Land Based Systems was the NATO standard for military map marking symbols. APP-6A was promulgated in December 1999. The NATO standardization agreement that covers APP-6A is STANAG 2019 (edition 4), promulgated in December 2000. APP-6A replaced APP-6 (last version, July 1986), which had been promulgated in November 1984 (edition 3 of STANAG 2019 covered APP-6), and was replaced in turn by APP-6B in 2008. The U.S. is the current custodian of APP-6A. The initialism APP (pronounced "a-pee-pee") stands for Allied Procedural Publication.

The APP-6A standard provides common operational symbology along with details on their display and plotting to ensure the compatibility, and to the greatest extent possible, the interoperability of NATO Land Component Command, Control, Communications, Computer, and Intelligence (C4I) systems, development, operations, and training. APP-6A addresses the efficient transmission of symbology information through the use of a standard methodology for symbol hierarchy, information taxonomy, and symbol identifiers.

These symbols are designed to enhance NATO’s joint interoperability by providing a standard set of common symbols. APP-6A constitutes a single system of joint military symbology for land based formations and units, which can be displayed for either automated map display systems or for manual map marking. It covers all of the joint services and can be used by them.

Units, Equipment, and Installations consist of icons, generally framed, associated with a single point on the map. All sorts of graphical and textual modifiers may surround them, specifying categories, quantities, dates, direction of movement, etc.

Tactical graphics represent operational information that cannot be presented via icon-based symbols alone: unit boundaries, special area designations, and other unique markings related to battlespace geometry and necessary for battlefield planning and management. There are point, line and area symbols in this category.

Meteorological and oceanographic symbology is the only set not under the standard's control: rather, they are imported from the symbology established by the World Meteorological Organization.

The Signals Intelligence and Military Operations Other Than War symbology sets stand apart from Units, Equipment, and Installations although they obey the same conventions (i.e., they consist of framed symbols associated to points on the map). They do not appear in APP-6A proper, having been introduced by MIL-STD-2525B.

Most of the symbols designate specific points, and consist of a frame (a geometric border), a fill, a constituent icon, and optional symbol modifiers. The latter are optional text fields or graphic indicators that provide additional information.

The frame provides a visual indication of the affiliation, battle dimension, and status of an operational object. The use of shape and colour is redundant, allowing the symbology to be used under less-than-ideal conditions such as a monochrome red display to preserve the operator's night vision. Nearly all symbols are highly stylised and can be drawn by persons almost entirely lacking in artistic skill; this allows one to draw a symbolic representation (a GRAPHREP, Graphical report) using tools as rudimentary as plain paper and pencil.

The frame serves as the base to which other symbol components and modifiers are added. In most cases a frame surrounds an icon. One major exception is equipment, which may be represented by icons alone (in which case the icons are coloured as the frame would be).

The fill is the area within a symbol. If the fill is assigned a colour, it provides an enhanced (redundant) presentation of information about the affiliation of the object. If colour is not used, the fill is transparent. A very few icons have fills of their own, which are not affected by affiliation.

The icons themselves, finally, can be understood as combinations of elementary glyphs that use simple composition rules, in a manner reminiscent of some ideographic writing systems such as Chinese. The standard, however, still attempts to provide an "exhaustive" listing of possible icons instead of laying out a dictionary of component glyphs. This causes operational problems when the need for an unforeseen symbol arises (particularly in MOOTW), a problem exacerbated by the administratively centralised maintenance of the symbology sets.

The icon is the innermost part of a symbol which, when displayed, provides an abstract pictorial or alphanumeric representation of an operational object. The icon portrays the role or mission performed by the object. APP-6A distinguishes between icons that must be framed or unframed and icons where framing is optional.

These unit type symbols can be combined, for example to represent armoured infantry units. There are also symbols that can be used to modify other unit symbols (they cannot appear by themselves):

Some of the most common combinations are:

Above the unit symbol, a symbol representing the size of the unit can be displayed:

The status of a symbol refers to whether a warfighting object exists at the location identified (i.e., status is "present") or will in the future reside at that location (i.e., status is "planned, anticipated, suspected," or "on order"). Regardless of affiliation, present status is indicated by a solid line and planned status by a dashed line. The frame is solid or dashed, unless the symbol icon is unframed, in which case the icon itself is drawn dashed. Planned status cannot be shown if the symbol is an unframed filled icon.

The full set of affiliations is:

Battle dimension defines the primary mission area for the operational object within the battlespace. An object can have a mission area above the Earth's surface (i.e., in the air or outer space), on it, or below it. If the mission area of an object is on the surface, it can be either on land or sea. The subsurface dimension concerns those objects whose mission area is below the sea surface (e.g., submarines and sea mines). Some cases require adjudication; for example, an Army or Marine helicopter unit is a manoeuvring unit (i.e., a unit whose ground support assets are included) and is thus represented in the land dimension. Likewise, a landing craft whose primary mission is ferrying personnel or equipment to and from shore is a maritime unit and is represented in the sea surface dimension. A landing craft whose primary mission is to fight on land, on the other hand, is a ground asset and is represented in the land dimension.

The full set of battle dimensions is:

The letter in parentheses is used by the Symbol identification coding (SIDC) scheme —strings of 15 characters used to transmit symbols.

The Space and Air battle dimensions share a single frame shape. In the Ground battle dimension, two different frames are used for the Friendly (and Assumed Friendly) affiliations in order to distinguish between units and equipment. The SOF (Special Operations Forces) are assigned their own battle dimension because they typically can operate across several domains (air, ground, sea surface and subsurface) in the course of a single mission; the frames are the same as for the Ground (unit) battle dimension. The Other battle dimension, finally, seems to be reserved for future use (there are no instances of its use as of 2525B Change 1). 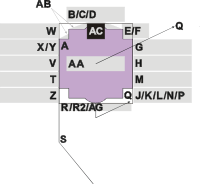 Positions of the various graphic modifiers around the symbol (itself field A). MIL-STD-2525B Change 1 fails to specify where to place fields AD, AE, and AF.

For example, the symbol for the A company of the (friendly) 42nd armored infantry battalion would look like this:

A hostile motorised anti-tank division (something that probably would not occur in reality, but presented here as an example) would look like this: