Gun truck
This article is about improvised armored vehicles used by regular/official forces. For the same type of vehicle used by irregular/non-government forces, see Technical (vehicle). 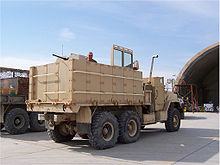 A Gun Truck of the type used in Iraq, based on an M939 five-ton truck

A military gun truck is an improvised fighting vehicle used by units of regular armies or other official government armed forces, based on a conventional cargo truck, that is able to carry a large weight of weapons and armor. They have mainly been used by regular armies to escort military convoys in regions subject to ambush by guerrilla forces.

When the prospect of a German invasion of the United Kingdom seemed likely, the British Army designed and built an improvised armored vehicle, the Bedford OXA. It was based on the one and a half ton OXD truck, and was upgraded with armor plate, and armed with a .55 in anti-tank rifle and a Bren gun. Slightly less than a thousand were built by 1941, and they were employed by the British Home Guard.

Other British examples from the invasion-scare period were the Armadillo armoured fighting vehicle and the Bison concrete armoured lorries. Both were conventional trucks fitted with improvised armour, in the case of the Bison, a concrete fighting-compartment was carried, essentially making a mobile pillbox. The Armadillo used two walls of wood, with the space between filled with gravel. Both vehicles had poor mobility and were employed for airfield defense by the Royal Air Force.[1][2] In the event of a surprise, airborne attack, Bisons would deploy a short distance to the key points of the airfield and probably fight from static positions,[1] positions where fixed defenses often could not be constructed as they would impede aircraft movement during day–to–day operations. The Armadillo's mobility, while poor, was better than the Bison's and it was intended they would take on a mobile role similar to a conventional armoured vehicle.[2]

During the Vietnam War, it was the mission of the US Army Transportation Corps to ferry supplies from the coastal ports of Qui Nhon and Cam Ranh Bay to inland bases located at Bong Son, An Khe, Pleiku, Da Lat, and Buon Ma Thuot. The logistical requirements of the MACV were huge, and 200-truck convoys were not uncommon. These formations were tempting targets for Viet Cong guerrilla groups, who often sprung ambushes in remote areas.

One unit that often fell victim to such attacks was the 8th Transportation Group, based in Qui Nhon. The stretch of Route 19 between An Khe and the Mang Giang Pass became known to them as "Ambush Alley" as incidents occurred there on an almost daily basis.[3]

Providing security for convoys proved virtually impossible, as the Military Police units whose task it was did not have the manpower or equipment to control the whole highway. Other military units only controlled the stretch of road within their designated area of operations, and for much of the way, it fell onto the transport units to ensure their own security. At first they did this with armed jeeps, but these rapidly proved inadequate, in the face of improved Viet Cong weaponry and tactics.

Eve of Destruction at Fort Eustis.

On September 2, 1967, a particularly devastating attack killed seven drivers, wounded 17 and destroyed or damaged 30 trucks. To remedy the obvious vulnerability of the supply convoys, a "hardened convoy" concept was implemented, protected by a new type of security vehicle. This gun truck, as it became known, was based on the two-and-a-half-ton cargo truck, protected by a barrier of sandbags, and armed with two M60 machine guns. Hardened convoys were smaller than previously, being composed of only 100 trucks, and their security detail was increased until there was one gun truck for every 10 transport trucks.

In the event of an ambush, their role was to drive into the "kill zone" during the first few minutes of the attack, and saturate the attackers with their fire power. Early designs proved flawed, as the sandbag protections quickly became waterlogged in the frequent rains, weighing down the whole vehicle. They were later replaced with ad hoc steel armor plating, salvaged from scrap yards. The crew consisted of a driver, two gunners, a non-commissioned officer, and sometimes a grenadier armed with an M79 grenade launcher.

On November 24, 1967, during an engagement in "Ambush Alley", a group of gun trucks managed to thwart an ambush. The convoy lost six transport trucks and four gun trucks damaged or destroyed, and several drivers were killed and wounded, but the Viet Cong lost 41 KIA and were forced to withdraw.[3]

Despite the increased security, transportation units still came under attack, forcing the gun truck units to improve the design of their vehicles. The two-and-a-half-ton trucks were underpowered, and the addition of armor and weapons slowed them down, leading to their replacement by five-ton cargo trucks that formed the basis for larger gun trucks. The improvised nature of these vehicles meant they varied considerably in appearance. They were given colourful nicknames such as "Duce is Wild," "Cold Sweat"," "Iron Butterfly" or "Pandemonium" that were often painted on the sides in large letters.

Their armament consisted of various combinations of weapons including M60s, .50-calibre machine guns, and XM 134 miniguns. Anti-aircraft weapons such as the Bofors 40 mm gun, or quadmount .50 cal. machine guns were also used. Most of these were obtained by cannibalising damaged infantry weapons that the transport units often carried on their return trip.

Eve of Destruction from above.

Armor plating had to be scavenged form various sources, including from the South Vietnamese army. Sometimes a double thickness of armour was fitted, with a space between each layer, to provide protection against anti-tank rockets. In other cases, the entire hull of an M113 armoured personnel carrier was mounted on the bed of a five-ton truck, thus providing all-round protection for the crew. Despite their aggressive names, gun trucks were strictly defensive weapons, being used only for convoy escort and perimeter defence duties.

Gun trucks suffered from several drawbacks. The added weight of armour, weapons and ammunition increased fuel consumption, as well as creating maintenance problems and reducing the durability of the truck frames. Also, the personnel assigned as crew to the security vehicles were no longer available for transport duties, thus reducing the lift capacity of each unit. Despite this, they were generally regarded as a success.[4]

In all, an estimated 300 to 400 trucks were transformed in this way.[4] They were intended as a temporary solution, but the Transportation Corps never received enough of their proposed replacement, the V-100 armoured car, so the gun trucks continued to serve until the end of the American involvement in Vietnam, in 1973. With the end of the Vietnam War, the need for such vehicles disappeared and most were either scrapped or returned to cargo carrying. One truck, an M54 named by its crew "Eve of Destruction," has been restored and is on display at the Army Transportation Museum at Fort Eustis, Virginia.

A gun truck damaged by an IED in Iraq. All the crew members survived. 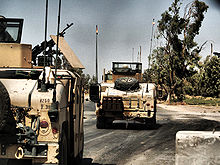 During the Iraq War, the vulnerability of American supply convoys became apparent as soon as March 2003, when a maintenance unit was ambushed in Nasiriyah, losing eleven soldiers killed and five taken prisoner, including Pfc. Jessica Lynch.[5] During the later phase of the war, road convoys were considered "soft" targets, and frequently came under attack by Iraqi insurgents. This led to the re-invention of the gun truck, with the first modified examples, based on M939 five-ton trucks, entering service in August 2003.

In April 2004, Leaders of the US Army Reserve 375th Transportation Group and the 812th Transportation Battalion formed a special provisional unit - the 518th "Gun Truck" Company. Based in Camp Navistar (located on the Kuwait side of the border Near Safwan, Iraq), this company acquired 35 humvees and five M939 five-ton trucks, and modified them with improvised armor and .50 calibre machine-guns. With many Reserve and National Guard combat arms units already converting and performing Convoy Security Escort service while deployed to Iraq, the need for a special Gun Truck unit proved unfeasible and the unit disbanded in April, 2005.[6]

The use of improvised fighting vehicles, protected by the so-called "Hillbilly armor", quickly became a political issue, with the Bush administration coming under criticism for having sent the U.S. military to fight without adequate equipment.[7] The idea of producing a standardised gun truck was instigated by Representative Duncan Hunter (R.-Calif.), chairman of the House Armed Services Committee, despite the reluctance of some Army superior officers.

Developed with the help of Vietnam veterans by the Lawrence Livermore National Laboratory, the resulting armored box (dubbed the "Hunter box") was intended for use on five-ton trucks.[8] Their armor protection was composed of high-grade steel plating, fiberglass and ballistic glass, while the armament consisted of two to four heavy machine-guns.[8]

The first prototype was completed in March 2004, and shipped to Iraq in July 2004, after which production began at a slow rate, with 35 units in service by July 2005. As of September 2007, a total of 100 kits have been produced for Iraq, and 18 for use in Afghanistan.[9] The "Hunter boxes" apparently proved popular with U.S. troops, but were criticized by senior officers for their lack of overhead protection, and for being top-heavy, however few cases exist to prove their doubts in this equipment.[10]

Up-armor kits were also produced for the standard Humvee gun truck. The soldiers appreciated the much needed armored protection but the extra weight of the up-armor kits slowed the Humvee's acceleration and speed substantially. The modified heavier vehicle's sluggishness could not match the manoeuvre capabilities of the insurgent vehicles. 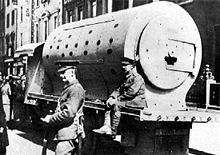