Insignia are often displayed on the sides of the fuselage, the upper and lower surfaces of the wings, as well as on the fin or rudder of an aircraft, although considerable variation can be found amongst different air arms, and within specific air arms over time.

The first use of national insignia on military aircraft was before the First World War by the French Aéronautique Militaire which mandated the application of roundels in 1912.[1] The chosen design was the French national cockade, which consisted of a blue-white-red emblem mirroring the colours of the flag of France. In addition, the rudders of the aircraft were painted the same colours in vertical stripes. Similar national cockades were designed and adopted for use as aircraft roundels by the air forces of other countries, including the U.S. Army Air Service.[1]

The British Royal Flying Corps (RFC) abandoned their original painted Union Flags because they looked too much like the Eisernes Kreuz (Iron Cross) used on German aircraft. The Naval Wing of the RFC used a red-rimmed white circle for a short period before both armed forces adoped a roundel resembling the French one, but with the colours reversed, (red-white-blue from centre to rim). This basic design with variations in proportions and shades has existed in one form or another to this very day.[1][2]

The military aviation insignia of both the United States and Russia have had interesting "crossovers" early in the 20th century. The initial US Army Signal Corps aviation insignia used during the Pancho Villa punitive expedition just before World War I, used on the vertical tail and wings was a red five-pointed star similar to that of the later Soviet Union, without a red or white outline border. A tricolor roundel, similar to that used by Imperial Russia was introduced by the US Army Air Service in February 1918 for commonality with the other allies, all of whom used such roundels, and Russia had already dropped out of the war. Contemporary with the red star, the US Navy was using an anchor symbol on the rudders of its seaplanes.

As of 19 May of 1917 all branches of the military were to use a white star with a central red dot all in a blue disk painted in the official flag colours.[1] In August 1919 the colours were adjusted to the current standards and the proportions were adjusted slightly so that the centre dot was reduced slightly from being 1/3 of the diameter of the blue dot, to being bound by the edges of an imaginary pentagram connecting the inner points of the star. During WW1 and into the early post war period, US Marine Corps aircraft often had a WW1 style tricolour roundel with an anchor painted on the sides of the fuselage.

In the months after Pearl Harbor it was realized that the red dot could be construed as being a Japanese Hinomaru from a distance or in poor visibility and in May 1942 the red dot was eliminated. On aircraft in service they were painted over with white. During November of 1942, US forces participated in the Torch landings and for this a yellow ring (of almost random thickness) was temporarily added to the outside of the roundel to reduce incidents of Americans shooting down unfamiliar British aircraft, which could themselves be distinguished by a yellow outline on their roundels.

None of these solutions was entirely satisfactory as friendly fire incidents continued and so the US Government initiated a study and discovered that the red wasn't the issue since colour couldn't be determined from a distance anyway - but the shape could be. After trying out several variations including an oblong roundel with two stars, they arrived at using white bars flanking the sides of the existing roundel, all with a red outline, which became official in June 1943. This still wasn't entirely satisfactory and the red was replaced with blue in September of 1943. On US Navy aircraft painted in gloss midnight blue, the blue of the roundels was difficult to distinguish so the blue portion was eventually dispensed with and only the white portion of the roundel was painted on the aircraft.

In January 1947 red bars were added within the existing white bars on both USN and USAAF aircraft and in September of the same year, the United States Army Air Forces (USAAF) became an independent service and was renamed the United States Air Force (USAF). In 1955 the USN would repaint all its aircraft from midnight blue to light grey over white and would use exactly the same roundel as the USAF again. Since then there have been some minor variations, mostly having to do with lo-visibility versions of the star and bars roundel. Air superiority F-15's eliminated the blue outline in the 1970's, and later some aircraft replaced the blue with black or a countershaded grey, or used a stencil to create an outlined version.

From 1923 onwards, a variant of the British red-white-blue roundel with the white ring omitted has been used on camouflaged aircraft. During the Second World War, the red inner circle of roundels on aircraft based in the Asia-Pacific region was painted white or light blue, so they would not be confused with the Hinomaru markings on Japanese aircraft (still used by the Japan Self-Defense Forces to this day). 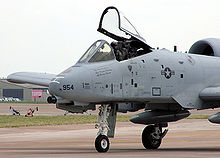 An A-10 Thunderbolt II with low-visibility USAF insignia on fuselage.

In recent decades, "low-visibility" insignia have increasingly been used on camouflaged aircraft. These have subdued, low-contrast colours (often shades of grey or black) and frequently take the form of stenciled outlines. Infra-red (ie heat) seeking missiles were found to be able to home in on the markings and so they either had to be reduced in size or contrast. Previously low visibility markings were used to increase ambiguity as to whose aircraft it was, and to avoid compromising the camouflage, all while still complying with international norms governing recognition markings. 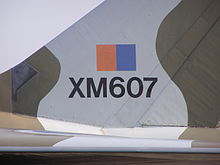