The Military Police of Rio de Janeiro State (Portuguese: Polícia Militar do Estado do Rio de Janeiro) (PMERJ) like other military polices in Brazil is a reserve and ancillary force of the Brazilian Army, and part of the System of Public Security and Brazilian Social Protection.[1] Its members are called "State Military" person.[2]

The primary mission of PMERJ is ostensibly preventive policing for the maintenance of public order in the State of Rio de Janeiro.

Under the United Nations, in cooperation with the Brazilian Army, the Military Police of Rio de Janeiro State has served in Angola, Mozambique, East-Timor, Sudan, and Haiti.

The first militarized police in Portugal (when Brazil was still a colony) was the Royal Police Guard of Lisbon (Portuguese: Guarda Real de Polícia de Lisboa), established in 1801,[3] which followed the model of the National Gendarmerie (French: Gendarmerie Nationale) of France, created in 1791.

When the Portuguese Royal Family was transferred to Brazil, the Royal Police Guard of Lisbon remained in Portugal, and another equivalent guard was created in Rio de Janeiro under the name of Military Division of the Royal Guard Police of Rio de Janeiro, in 1809.[4]

With the abdication of Emperor Pedro I in 1831, the Regency held reformulations on the Brazilian Armed Forces. The Royal Guard Police of Rio de Janeiro became extinct,[5] and was replaced by the Municipal Guard Corps of Volunteers,[6] a type of security force similar to the National Guard. The same law allowed each Province to establish its own Guard of Volunteers.

With the Proclamation of the Republic, Brazil adopted a constitution based on the United States, where the states have a large autonomy. The Corps of Police began to be administered by the states and became smaller regional armies, with infantry, cavalry, artillery, and later, even with air forces. This dangerous situation to the national security remained until the rise of Getúlio Vargas dictatorial government in 1930s, when he abolished states autonomy, and the Brazilian army began its control over states military polices and firefighters corps. 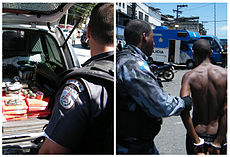 Military Police in combating crime in the favelas of Rio de Janeiro.

The battalions are based in major urban centers, and their companies and platoons are distributed according to population density in cities.
The Military Police of Rio de Janeiro is present in all cities of the State.

Commands and Battalions of Military Police

These are the Policing Area Commands and their respective batallions. Cities and neighborhoods indicate the location of their headquarters. 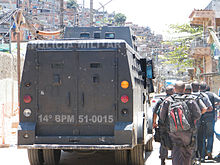 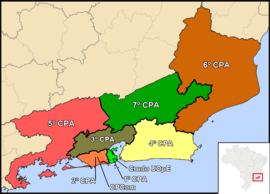 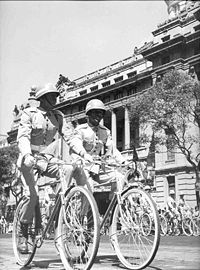 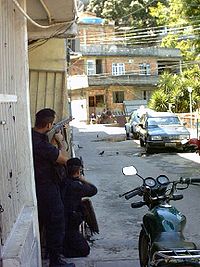 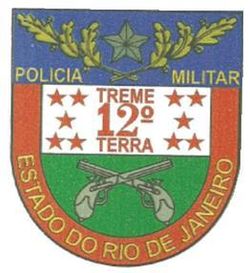 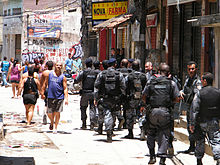 Military police operation in Complexo do Alemão in November 2010.

Since 1975, the PMERJ use dark blue in their uniforms on blue with black trousers.

The PMERJ has the same hierarchical classification[8] of the Brazilian Army, with another type of insignias.[9]