Military Police (Lithuanian: Karo policija) is a law enforcement agency operating within the national defence system of the Republic of Lithuania and is a part of the Lithuanian Armed Forces. Military Police are directly subordinate to the Chief of Defence of the Republic of Lithuania. Main tasks of Military Police include preventing of crimes and other breaches of legal acts, investigating and disclosing offences, enforcing law and order in military territories and in the armed forces and ensuring the security of military traffic.

Keeping with procedures outlined in legislation Military Police carries out search of soldiers suspected or accused in crimes and violations of other legal acts, deserted or missing soldiers as well as pretrial investigations in cases that are in the competence of Military Police under the legislation on penal process, in cases stipulated in legislation, carries out the orders of interrogators, prosecutors, judges and courts. Military Police maintains military discipline and order by patrolling, security of military transport, escorting of military transport convoys, as well as guarding of key military objects, guardhouses.[1] 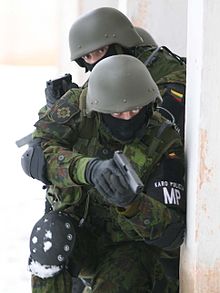 Military policemen participate in multinational operations and exercises. They already participated in international missions in Bosnia and Herzegovina, missions in Iraq, multinational exercises Amber Hope, Baltic Challenge, Baltic Eagle, Strong Resolve, Rescuer-Medceur, where they maintained security of military transport and public order. Any person serving in the National Defence System or having served in the compulsory military service, after passing an established selection process can be accepted to Military Police.

Military Police carries out its functions in accordance with administrative division of the Republic of Lithuania:

As of this edit, this article uses content from "Military Police in Lithuania", which is licensed in a way that permits reuse under the Creative Commons Attribution-ShareAlike 3.0 Unported License, but not under the GFDL. All relevant terms must be followed.