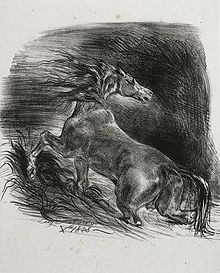 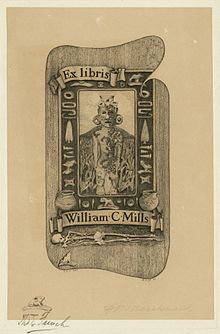 Chine-collé is a special technique in printmaking in which the image is transferred to a surface that is bonded to a heavier support in the printing process. One purpose is to allow the printmaker to print on a much more delicate surface, such as Japanese paper or linen, which pulls finer details off the plate. Another purpose is to provide a background colour behind the image that is different from the surrounding backing sheet.

The final image will depend on the design and ink color of the printed image, the color and opacity of the paper to which the image is directly printed (plus any inclusions such as petals or fibers in that paper), and the color of the backing sheet.

In the typical "pre-pasted" method, the thin paper (dry) is trimmed to the size of the plate. Then, paste is applied and allowed to dry. When the printmaker is ready to print, the paper is dampened to activate the paste and placed, paste-side up, on an inked plate. Then, the ensemble (plate plus thin paper with paste) is placed on a dampened backing sheet and run through a press as described above. An advantage of the pre-pasted method is that once dried, the paste-applied papers can be stored indefinitely, just like a lick-and-stick postage stamp. A disadvantage of this method is that because the paper is trimmed dry, the artist must take into account how much in each direction the paper will expand when it is dampened prior to printing.

Some artists have moved away from precise trimming of a single sheet of paper to the size of the printing plate when using this method. For example, some experiment with pre-cut shapes for a collage effect. Or simlutaneously adhere multiple overlapping pieces of paper under the printed image.

A more traditional paper choice would be a fine paper made from gampi fiber. Some artists experiment with non-traditional papers, using such things as newspaper, ephemera, dress patterns, and book pages as the sheet to be printed on.

Chine-collé is sometimes mistakenly used to refer to any type of collage.

Chine-collé roughly translates from French, chine = tissue and collé meaning glue or paste. "Chine" because the thin paper traditionally used in the process was imported to Europe from China, India and/or Japan.

There is some variation in adhesives used for Chine-collé. Some artists are reported to use a dusting of flour right before pressing rather than paste. Some have tried using no adhesive at all, simply relying on the high pressure of the printing press and properties of the paper (fibers, sizing) to fuse the papers together similar to paper-making; however, this method may be variable and unreliable. More recently, some artists have turned to adhesives such as PVA glue or gel medium rather than paste.

In traditional paste-making for Chine-collé, wheat or rice starch is separated away from gluten and other things in wheat or rice flour. Then, pure starch is cooked with distilled water to form a congealed gel. Finally, the gel is passed through a fine sieve such as a piece of silk to form the paste. Starch-based pastes are considered archival and are sometimes used in other paper-based applications, such as book binding, book repair and collage.