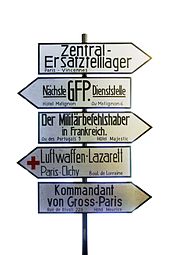 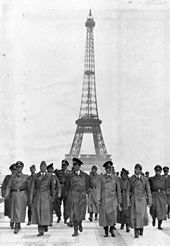 The Military Administration in France (German: Militärverwaltung in Frankreich) was an interim occupation authority established by Nazi Germany during World War II. It remained in existence from May 1940 to December 1944. As a result of the defeat of France and its Allies in the Battle of France, the French cabinet sought a cessation of hostilities. An armistice was signed on 22 June 1940 at Compiègne. Under its terms, a designated area in the north and west of France, the zone occupée, was occupied by the German Army; in this region, the French government located at Vichy, headed by the ageing Maréchal Philippe Pétain, was subordinate to the Germans. Most of the remaining third of the country was set aside as the zone libre, to be fully controlled by the Vichy government. Alsace and Lorraine were reincorporated into Germany proper (thus subjecting their male population to German military conscription.) Several departments along the Italian border were occupied by Italian troops, while areas along the Belgian frontier were administered by the German occupation authorities in Brussels. The entire Atlantic coastline was declared a military zone, placing it off-limits to French civilians (except for local inhabitants, who required a special pass). Both the unoccupied and the occupied portions of France remained legally under the control of the Vichy government.

When the Allies invaded North Africa on 8 November 1942, the Germans and Italians immediately occupied the remaining free part of France. The liberation of France began on 6 June 1944 with the Allied forces landing on D-Day and the Battle of Normandy and ended in December. Paris itself was liberated on 25 August 1944.

The life of the French during the German occupation was marked, from the beginning, by endemic shortages. They are explained by several factors:

The Germans seized about 20% of the French food production, which caused severe disruption to the household economy of the French people.[3] French farm production fell in half because of lack of fuel, fertilizer and workers; even so the Germans seized half the meat, 20% of the produce, and 80% of the champagne.[4] Supply problems quickly affected French stores which lacked most items. Faced with these difficulties in everyday life, the government answered by rationing, and creating food charts and tickets which were to be exchanged for bread, meat, butter and cooking oil. Hunger prevailed, especially affecting youth in urban areas. The queues lengthened in front of shops. In the absence of meat and other foods including potatoes, people ate unusual vegetables, such as Swedish turnip and Jerusalem artichoke. Products such as sugar were replaced by substitutes (saccharin). Coffee was replaced by toasted barley mixed with chicory. Some people benefited from the black market, where food was sold without tickets at very high prices. Farmers diverted meat especially to the black market, which meant that much less for the open market. Counterfeit food tickets were also in circulation. Direct buying from farmers in the countryside and barter against cigarettes were also frequent practices during this period. These activities were strictly forbidden however and thus carried out at the risk of confiscation and fines. Food shortages were most acute in the large cities. In the more remote country villages, however, clandestine slaughtering, vegetable gardens and the availability of milk products permitted better survival. The rationing system was stringent but badly mismanaged, leading to malnourishment, black markets, and hostility to state management of the food supply. The official ration provided starvation level diets of 1300 or fewer calories a day, supplemented by home gardens and, especially, black market purchases.[5]

Ersatz, or makeshift substitutes, took the place of many products that were in short supply; gas generators ("gazogènes") on trucks and automobiles burned charcoal or wood pellets as a substitute to gasoline, chicory took the place of coffee, and wooden soles for shoes were used instead of leather. Soap was rare and made in some households from fats and caustic soda.

With nearly 75,000 inhabitants killed and 550,000 tons of bombs dropped, France was,after Germany, the second most severely bomb-devastated country on the Western Front of World War II.[6] Allied bombings were particularly intense before and during Operation Overlord in 1944.

The Allies' Transportation Plan aiming at the systematic destruction of French railway marshalling yards and railway bridges, in 1944, also took a heavy toll on civilian lives. For example, the 26 May 1944 bombing, hit railway targets in south-eastern France.[7]

During the German occupation, the Obligatory Work Service (French: Service du Travail Obligatoire, STO) consisted of the requisition and transfer of hundreds of thousands of French workers to Germany against their will, for the German war effort. In addition to work camps for factories, agriculture, and railroads, forced labor was used for V-1 launch sites and other military facilities targeted by the Allies in Operation Crossbow. 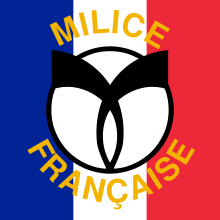 Flag of the French Militia, created in 1943 to help the Germans fight the Resistance.

At night, inhabitants had to close their shutters or windows. Without an Ausweis, it was forbidden to go out during the night. During the day, numerous regulations, censorship and propaganda made the occupation increasingly unbearable.

Schoolchildren were made to sing "Maréchal, nous voilà !" ("Marshall, here we are!"). The portrait of Marshal Philippe Pétain adorned the walls of classrooms, thus creating a personality cult. Propaganda was present in education to train the young people with the ideas of the new Vichy regime. However, there was no resumption in ideology as in other occupied countries, for example in Poland, where the teaching elite was liquidated. Teachers were not imprisoned and the programs were not modified overall. In the private Catholic sector, many school directors hid Jewish children by providing education for them until the liberation.[citation needed]

Approximately 49 concentration camps were in use in France during the occupation, the largest of them at Drancy. In the occupied zone, as of 1942, Jews were required to wear the yellow badge. On the Paris Métro Jews were only allowed to ride in the last carriage. 13,152 Jews residing in the Paris region were victims of a mass arrest by Nazi authorities on 16 and 17 July 1942, known as the Vel' d'Hiv Roundup, and transported to Auschwitz where they were killed.[8]

Overall, according to a detailed count drawn under Serge Klarsfeld, slightly below 77,500 of the Jews residing in France died during the war, overwhelmingly after being deported to death camps.[9][10] Out of a Jewish population in France in 1940 of 350,000, this means that somewhat less than a quarter died; while horrific, the mortality rate was lower than in other occupied countries (e.g. 75% in the Netherlands), and because the majority of the Jews were recent immigrants to France (mostly exiles from Germany), more Jews lived in France at the end of the Vichy regime than did approximately ten years earlier when Hitler formally came to power.[11] 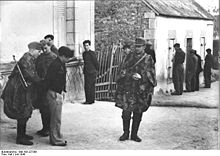 Although the majority of the occupied French population did not take part in active resistance, many resisted passively through acts such as listening to the banned BBC, or giving collateral or material aid to Resistance members. Others assisted in the escape of downed US or British airmen who eventually found their way back to Britain, through Spain. Beginning in 1942, many others refused to be drafted into the factories and farms of Germany by the "STO" organisation, going underground to avoid imprisonment and subsequent deportation to Germany. For the most part, these "réfractaires" eventually joined the Resistance. Armed underground groups in the field (known as the "Maquis") began to organise in the more remote parts of France in late 1942 and 1943. They received weapons such as Bren guns, Sten submachineguns, US M1 carbines and other rifles, plastic explosives, ammunition, and funds from thousands of parachute drops and solo landings at night by RAF Lysander aircraft. They also received direct support on the ground from British radio operators and tactical advisors, such as Nancy Wake, who were parachute dropped to assist the Maquis in central France. After the Allied invasion of Normandy in June 1944, the French armed resistance groups (FFI, FTP and others) systematically sabotaged the railway lines, destroyed bridges, cut German communications and provided general intelligence that was communicated directly to London via radio within hours.