The Accademia Militare is a military university in Modena, in northern Italy, located in the Palazzo Ducale, in the historic centre of the city. It is the first such military institution in the world. The academy is open for enrollment to both sexes, and focuses on the initial training and selection of future military officers in the Italian Army or in the Carabinieri.[1] A typical course of study is at least two years, upon the successful completion of which the trainee can either go on to study another 3 years at the Military Research Institute of Turin or at the Carabinieri Officer Candidate School in Rome.

The Academy was originally founded in Turin, then part of the Duchy of Savoy.

In 1669 Duke Charles Emmanuel II devised the creation of an academy to provide competent military leaders who would be faithful to the House of Savoy, and began designing the layout and gathering the staff and funds necessary for the construction of such an academy, which would be completed many years later due to his passing away rather prematurely. After his death the Duchess Maria Giovanna Battista of Savoy-Nemours, the state regent, opened the Royal Academy on January 1, 1678. As such, it is the first such military institution in the world, preceding the Artillery Military Academy in St. Petersburg (1717), the Royal Military Academy (1741) of Woolwich, London, the Ecole Militaire in Paris (1750) and United States Military Academy in West Point (1802).

The design and construction of Turin's Royal Academy were entrusted to the Court Architect Amedeo di Castellamonte, whose design housed the academy until 1943. The aerial bombardments of World War II destroyed the entire complex; a portion of the colonnade was gathered together and carried in 1960 to Modena, were it was reassembled in the courtyard of the Palazzo Ducale, which was thus renamed the "Courtyard of the Military Academy of Turin."

The Modena location of this academy can trace its roots back to the "Academy and Conference of Military Architecture" founded by the duke Francesco III d'Este in 1756. In 1798, Napoleon Bonaparte expanded the Academy's curriculum to include a military engineering school and artillery school, and it trained all Army officers in Italy until 1814. Following the Restoration, the Duke Francis IV of Habsburg-Este founded another expansion , the Military Academy of Nobility,[2] which was later opened to young people without noble titles. On the initiative of General Manfredo Fanti, in 1859 a Central Military School was founded, which became the Military School of Infantry in 1860, on the eve of the proclamation of the Kingdom of Italy in 1861.

Since 1937 the Military Academy of Modena also hosts courses for the training of officers of the Carabinieri,[3] from 1933 to 1936 were also hosted the 37th and 38th Officer's Course of the Royal Guard. In 1943 the two institutions were suspended, which resumed their function in May 1944 at the barracks of Pico Lecce as a Special Commando Royal Military Academy. After the end of the war and the fall of the monarchy, the Military Academy in Modena (1947) became unified.

Among the most illustrious alumni of the Academy are 31 ministers, 6 Prime Ministers, and 33 senators.

The Academy is led by a Division General and the Command Office run by his vice Brigadier General. There are then two Regiments, the Academic Department and the Student Regiment.

The Academic Department is run by a Colonel who has secretariat and four departments under him which are responsible for the didactic activity of the institute. The departments are: 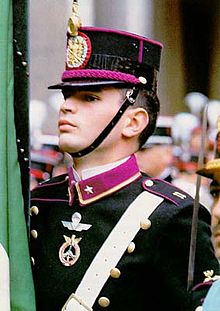 The Military Academy is a demanding training course for young people, and the training falls into various subcultural, military and sports-related elements. The courses of study are of various types and duration:

The military academy also promotes and provides "military preparation", a term they use to mean required topics all officers should know, which includes:

Obviously, every department has some officers specializing in some of these disciplines, but there is much cross training. The sports training includes gymnastics, defensive melee combat, swimming, riding and target shooting.

In addition to these theoretical activities (except for sports), students need a specialized technique that is manifested in military training practice. These activities are mostly mock exercises with small arms and armor, training in hand-to-hand fighting, learning how to maintain cohesion when getting to battlefields and military orientation and direction finding.

Every study course has a final exam and there are also summer training camps, and weeks of training in the snow. The years of study are divided as follows:

Number and name of classes

Every class has a number. This tradition was begun at the first schools in both Turin and Modena, each based on when they were founded in 1815 and 1860 respectively. When the school was reopened after the second world war, they decided to unify the schools and began numbering from zero. However, in 1968, it was decided to use the original Turin numbering, beginning with the 150th class. Some numbers are missing or out of order due to wartime activities when classes were accelerated or skipped altogether. Each class, along with its number, is given a motto, assigned from among twenty different names, so classes have the same name every twenty years, and there are ceremonies to honor the classes both forty and twenty years behind the current one.

This article contains text translated from the Italian Wikipedia article Accademia Militare di Modena which is licensed under the GFDL.