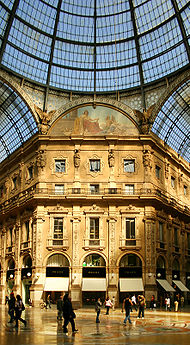 Milan is recognized internationally as one of the world's most important fashion capitals, along with Paris, New York City, Rome, London and Tokyo. In 2009, the city was nominated "fashion capital of the world" by the Global Language Monitor, even surpassing its relative cities.[1]

The Galleria Vittorio Emanuele II in 1880.

Milan's fashion history has evolved greatly throughout the years. Milan began as a centre of fashion in the Middle-Ages and Renaissance, as in Venice and Florence, the making of luxury goods was an industry of such importance that in the 16th century the city gave its name to the English word “milaner” or “millaner”, meaning fine wares like jewellery, cloth, hats and luxury apparel. By the 19th century, a later variant, “millinery”, had come to mean one who made or sold hats.

In the mid-19th century cheaper silk began to be imported from Asia and the pest phylloxera damaged silk and wine production. More land was subsequently given over to industrialisation. Textile production was followed by metal and mechanical and furniture manufacture.

Later, in the early-20th century, Milan became a major center of silk and textile productions. However, the city lost its fashion capital status to Florence, which in the 1950s and 60s was the fashion capital of Italy and home of the Italian "Alta Moda", equivalent to the French "haute couture".

However, in the 1970s, Milan's fashion image became more glamorous, and as Florentine designs were usually very formal and expensive, the city became a more popular shopping destination, with numerous boutiques which sold both elegant and everyday clothes. Milanese designs were known for their practicality and simple elegance, and became more popular and affordable than Florentine and Parisian designs. Milan started to become an internationally successful and famous fashion capital towards the late-1980s and early 1990s. After a brief fall of popularity in the 2000s (when, according to the Global Language Monitor Milan ranked slightly lower than its relatives, such as New York City, Paris, London and Rome), the city has throned 2009's fashion capital of the world.[2]

Milan, like most other major fashion capitals, has two fashion weeks, one in Spring and another in Autumn. The Menswear shows occur in between autumn(fall)/winter and spring/summer in the city. The penultimate fashion week is also held in Milan. The show was first established in 1979. 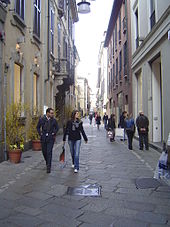 Most of the major Italian fashion houses and labels are based in Milan, even though many of them were founded in other cities. Today's top fashion houses which are headquartered in Milan are: Gucci, Prada, Valentino SpA, Armani, Dolce & Gabbana, Versace, Missoni, Moschino, Luxottica, Trussardi, Etro and Miu Miu. Milanese company Luxottica is currently the world's most successful eyewear company, with a revenue of €5.202 billion (2008),[3] an operating income of €749.8 million (2008)[4] and a profit of €379.7 billion.[5]

There are numerous fashion agencies and institutes in Milan. Here is an incomplete list:

Istituto Marangoni is a fashion institute with campuses in Milan, London, and Paris. It was founded and granted the status of 'Professional Art School' on December 17, 1935. Under the Ministerial Decree of 13 February 1951, the status of the school was raised to 'Institute'. Today, the value of diplomas and certificates issued by the institute mainly lies in the reputation that has been established in over seventy years of continuous activity. 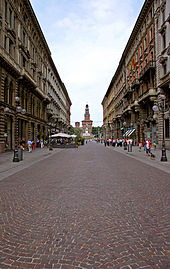 An incomplete list of Milan's most prestigious and important shopping streets and districts: