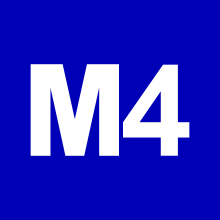 The Line 4 is a new underground rapid transit line under construction[1] in Milan, Italy, part of the Milan Metro system. The line was planned to be completed in 2015, as part of the works for the upcoming Milan Expo. However, delays in planning, financing[2] and construction works will probably force to postpone the complete opening, and only the first part of the line is now expected to open by 2015.[3]

The line, when complete, will be 15 km (9.3 mi) long with 21 stations. The expected annual ridership is 87 million. The total estimated cost is about €1.7 billion. 786 million will be granted by the government, 512 million will come by private investors and 400 from the city of Milan.[4] The line will feature completely automatic driverless trains.[5]

The consortium ATM - Impregilo will be responsible for the construction works.[4]

The line is planned to connect the south-western neighborhood of Lorenteggio with the Linate Airport on the east, passing through the city center. Works were planned to begin at Lorenteggio; however, since only one part could be finished in time for the Expo, the one connecting Linate Airport to the city was chosen to be the most important and therefore construction works will proceed in the opposite direction.[3]