The Milan–Bologna railway is the northern part of the traditional main north-south trunk line of the Italian railway network. It closely follows the ancient Roman Road, the Via Aemilia. The line was opened between 1859 and 1861 as a single-line railway, and was doubled between 1866 and 1894. It was electrified at 3,000 volts DC in 1938. High-speed trains on the route have used the parallel Milan–Bologna high-speed line since 13 December 2008.

The Milan–Bologna line was not built as it is now but was created out of the merger of two existing lines built at different times and for different purposes: it was formed by linking the line from Milan towards Piacenza with the line from Turin through Piacenza to Bologna, Florence and Rome.

The Kingdom of Lombardy-Venetia was until 1859 still part of the Austrian Empire and conceived concessions for the construction of railways, not so much for its commercial advantages as for military purposes and to bring together the various geographical regions of the empire. As early as September 1835 the Venice Chamber of Commerce had asked permission to form a company for the construction and operation of a railway line from Venice to Milan, but found it very difficult to obtain this "privilege".

The first railway in the region, the Milan–Monza line, was opened in 1840. The second line, opened in 1842, was the first section of the Milan–Venice line, fully completed in 1857. By that time railways were proliferating even in the Piedmont; in 1859 when Austria declared war on Sardinia the Piedmontese and Austrian networks had come close to the point where the bridge over the Ticino River was subsequently built connecting Turin and Milan.

The Austrians were defeated and on 11 July 1859 signed the Armistice of Villafranca; Lombardy was annexed to the Kingdom of Sardinia and the Veneto remained Austrian. As a result, the Lombard rail network was separated from that of Austria[2] and therefore the nature of its development and operations changed. Instead of links with Venice, links with central Italy and the Adriatic Sea were promoted. The Treaty of Zürich signed on 10 November 1859 also included an agreement[3] that was the origin of the Società delle Strade Ferrate della Lombardia e dell'Italia Centrale (Lombardy and Central Italy Railway Company) and the Società delle Strade Ferrate dell'Austria meridionale e del Veneto (Southern Austria and Veneto Railway Company).[4] Both companies soon began building new lines and completing others: on 21 July 1859 the 146 km long Piacenza–Bologna line was opened, and on 14 November 1861 the 68 km long Milan-Piacenza section was opened[5] with a temporary wooden bridge over the Po River. In 1863 a flood swept away the structures and the line was interrupted several times. The construction of a long steel girder bridge, completed in 1864, put an end to the insecurity of the rail link.

Meanwhile Piacenza had already been connected to the Piedmont network in 1860 and the important Turin–Bologna–Ancona trunk route was completed in 1861. This line was extended to Foggia in 1863 and Brindisi in 1865.[6] The first crossing of the Apennine between Bologna and Florence, the Porrettana line, was completed in 1863.

In 1865 many small railway companies were merged into four large companies that took over the assets and lines along with the granting of new concessions. The Società delle Strade Ferrate della Lombardia e dell'Italia Centrale was merged with other Alpine and Apennine lines, becoming the Società per le strade ferrate dell'Alta Italia ("Upper Italian Railway", SFAI) with 2,092 km of lines in operation and 300 km under construction or proposed.

In 1871 with the opening of the Fréjus Rail Tunnel to rail traffic,[6] a mail train, the Indian Mail (known in Italian as La Valigia delle Indie) was routed over the line from Piacenza to Bologna; it operated weekly from London and Paris via Modane and Turin to Ancona and Brindisi, where it connected with steamships to India via the Suez Canal. In 1879 this became a passenger train, and later carriages were branded "CIWL" (Compagnie Internationale des Wagons-Lits) by agreement with the operator of the line, the SFAI. The commercial speed of the train, however, remained low at about 40 km/h, due to the condition of the line and its bridges.

The reorganisation of the Italian railways into four companies, however, gave rise to more problems than it solved, so in 1885 the railways were divided between two new companies, the Società per le Strade Ferrate del Mediterraneo — known as the Rete Mediterranea (Mediterranean Network) and comprising the lines west of Milan and on the Tyrrhenian coast, and the railways of Calabria and Basilicata — and the Società Italiana per le strade ferrate meridionali—known as the Rete Adriatica (Adriatic Network), comprising the remaining lines. These networks connected at various stations: Milan, Pavia, Piacenza, Parma, Pisa, Florence, Rome, Naples and Taranto. The Milan–Bologna line had been built as a single track, so it was divided between the two companies: passengers departed from Milan on a Mediterranean Network train and changed at Parma or Piacenza to an Adriatic Network train to reach Bologna.

Starting in 1890 the Adriatic Network agreed to the luxurious Peninsular and Oriental Express from London to Brindisi[7] operating on the line at up to 80 km/h. The line was later doubled, starting with the Piacenza–Parma section, and access to it was granted to both companies. The doubling started in 1866 and was completed in 1894. The line between Milan to Piacenza was originally not used much, except for local traffic; most travellers preferred to take direct trains between the "capitals" of Turin, Florence and Rome. The first daily direct connection between Milan and Rome started in 1880: the "1" Express. By the end of the century there were about ten expresses from Milan in each direction. The first section (Fornovo–Parma) of the Pontremolese line, connecting the Milan–Bologna line to La Spezia and the Tyrrhenian Sea was opened on 2 July 1883; the line was completed on 12 July 1894.

The line under Ferrovie dello Stato

When the state railway company, Ferrovie dello Stato, was established it inherited a diverse range of rolling stock from the former rail companies. Track was in a poor condition and the maximum speed on the line was 80 km/h and then only for specially-equipped trains, with slower speeds over bridges and points. Therefore FS had to proceed with the reconstruction of bridges and viaducts, track and points in the stations, signalling and safety equipment.

Only after this work was finished in the 1910s could the new powerful Italian 690 Pacific steam locomotives be introduced; they were designed specifically for flat and fast lines but had a very high weight per axle compared to locomotives previously used in Italy. In the 1920s improvements to the line finally allowed train operation at up to 100 km/h for the fastest trains. Only in 1929 was the line adequate for loads of 20 tons per axle; even then this required slowing to 20 km/h on the long iron bridge over the Po near Piacenza until its replacement by a new bridge. After its opening, the average commercial speed on the line was raised to 87 km/h.

Starting in 1927, the Milan–Bologna line was the site of the first major trial of in-cab signalling, with the signalling information passed by magnets. This system was designed by the engineer Gino Minucciani. The successful experiment was followed in 1928 by the equipping of the line to Bologna for the repetition of two types of signals: stop and go; if the driver did not comply the braking system would be automatically applied. The 690 locomotives were equipped with this system.

In the late 1920s the limits of steam began to become clear, especially in terms of its high operating costs and its limited potential for further acceleration. It was decided to electrify the line at 3,000 volts direct current following excellent results achieved in experiments, although the Porrettana line between Bologna and Florence had been electrified with a three-phase alternating current system in 1927, and this system was proposed for the new Bologna–Florence direttissima. During the same period the ever-increasing traffic on the line, which had become the primary axis of the Italian railway network, began to saturate the capacity of the stations in Bologna, and a rail bypass was built to its north.

Following the electrification of the line in 1938, Minucciani's system of in-cab signalling was abandoned because it was considered too expensive to equip the electric locomotives with it. Instead FS tested a new system of automatic block signalling designed by Minucciani on a 110 km stretch of line. Although these tests were successful it was not implemented because investment in that period prioritized the speed and punctuality of trains for propaganda reasons rather than innovation in safety devices. In 1939 a train hauled by ETR 212 travelled from Milan to Bologna in just 77 minutes, while the normal speed for express trains had been reduced to 105 minutes.[8] 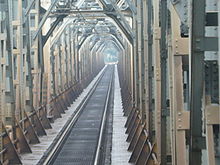 The Po River Bridge at Piacenza

In 1997 two additional lines were added to the congested two-line section of line through Borgolombardo and Melegnano stations: they began immediately after Milano Rogoredo station and bypassed the stations of Borgolombardo and Melegnano, reconnecting with the old line two kilometres before San Giuliano Milanese station at Sordio junction. Although this was only a few kilometers long and had at-grade crossings connections with the old line in both directions, it allowed medium- and long-distance trains to pass regional and freight trains, which had previously not been possible except at Melegnano station. Regional trains were no longer forced to wait at Melegnano station to be passed by long-distance trains, and now even had a chance to make up delays.

In 2002 work began on building two high-speed lines to create the four-line AV/ AC (Linea Alta Velocità/ Alta Capacità—"high speed/high capacity") line between Milan and Bologna, which was fully opened to service on 14 December 2008 apart from some interconnections with the traditional line. On 14 December 2003 platforms 7 and 8 were opened at Milano Rogoredo station, enabling regional trains to avoid crossing the long-distance lines at the start of the new line. On the same day a new station was opened at San Donato Milanese, south of Rogoredo.

On 29 May 2005 the grade-separated interconnection at Melegnano was opened: this meant that trains from the new line could join the old line travelling south without having to stop for trains travelling in the opposite direction. The new interconnection is about 4 kilometers long and the junction with the old line was between San Zenone and Tavazzano rather than between Melegnano and San Zenone: the number of stations bypassed was increased to five. With the completion of new interconnection, the temporary junction at Sordo was removed.

On 13 December 2009 services commenced between Milan, Rogoredo and Lodi, during the off-peak with S1 line trains of the Milan Suburban Railway Network.

Work is currently under way (2009) as part of the Milan-Bologna AV/AC project on the relocation of the traditional line between Marzaglia (south of the bridge over the Secchia River) and Modena, in order to avoid some densely populated neighbourhoods in Modena.