The MAP (Ministerstvo Aviatsionnoy Promyshlennosti - ministry of aviation industry) ordered the Mikoyan OKB to build prototypes of the new interceptor, to be armed with either K-6, K-7, K-8, K-9, unguided rockets, or an aimable twin cannon installation. Automatic guidance to the interception point was to be provided by Urugan-5 (hurricane-5) integrated weapons systems.

Installation of weapons systems was not carried out on the Ye-150 and it was not authorised for production, but development continued with the Ye-151, and Ye-152.[1]

Ye-151
The Ye-151 cannon armed version was designed in parallel with the Ye-150 but did not proceed to the hardware stage. The weapon system was to have consisted of twin TKB-495 or Makarov TKB-539 cannon,[2] with a rate of fire of 2,000 rds/min, mounted on a rotating ring in tilting mounts. The mounts could tilt ±30° and the mounting ring could rotate 360°, which gave the installation a 60° cone of fire around the centreline of the mounting ring. To accommodate the ring turret the inlet duct was lengthened with the rotating ring forming the inlet lip, wind tunnel testing confirming that the extended inlet duct would actually improve aerodynamic and inlet performance; the lengthened inlet was retained for all later Ye-150 series aircraft (sans cannon installation). Further tunnel testing with an inlet mounting fitted with cannon revealed de-stabilising forces when the cannon were deflected, making accurate weapon aiming impossible and precluding further development. Studies were carried out with the cannon mount aft of the cockpit to reduce de-stabilising moment, as the Ye-151-2, but no hardware resulted.[1]

Ye-152
The two single engined Ye-152's were completed with improved R-15-300 engines, as the Ye-152-1 and Ye-152-2, but reliability remained an issue, with only limited development flying, weapons system testing and world record flights carried out. The poor reliability of the engine and the cancellation of the intended K-9 / Urugan-5B weapon system brought the Ye-152 program to a close.[1][3] Cropped delta wings with greater area allowed the large K-80 or K-9 missiles to be carried on wingtip launchers.

The second aircraft, Ye-152-2, was returned to Mikoyan for conversion to the Ye-152M, featuring an axi-symmetric convergent divergent nozzle and canards on either side of the forward fuselage, which were soon removed. The Ye-152M was retired to the Central Air Force Museum at Monino misleadingly marked as the Ye-166 which was, in fact, the unmodified Ye-152-1.[1] 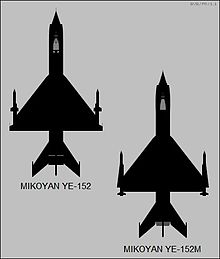 Ye-152A
The Mikoyan-Gurevich Ye-152A was an twin-engined version of the Ye-152, sharing its general layout but utilising two Tumansky R-11 afterburning turbojets mounted side by side in a revised rear fuselage. The change in engine type, necessitated by the extremely poor reliability of the R-15, led to a widened rear fuselage with large ventral fins. The majority of the airframe was identical to the Ye-152, incorporating the extended inlet and fuselage found to be advantageous during testing for the proposed Ye-151 cannon armed variant of the Ye-150. Due to the use of fully developed and reliable R-11 engines the Ye-152A was ready for flight in July 1959 and continued to fly on test duties at the Mikoyan-Gurevich test centre until it crashed in 1965.[1]

Armament was to have been two K-9 air to air missiles, as part of the Ye-152-9-V weapon system, featuring the TsKB Almaz TsP-1 fire control radar.

The Ye-152A was assigned the NATO reporting name Flipper after a flypast during the 1961 Aviation Day display at Tushino and also erroneously labelled as the MiG-23.[1]

Ye-152M
The Ye-152-2 was returned to the Mikoyan factory for conversion to the Ye-152M, fitted with small canard surfaces either side of the forward fuselage and an R-15-300 engine fitted with axi-symmetric convergent-divergent nozzle, allowing the ejector ring around the rear fuselage to be dispensed with. After initial flight testing the canards were removed leaving the mounting structures behind. Used for further testing of the R-15 engine and Urugan weapon systems, the Ye-152M was retired to the Central Air Force Museum at Monino bearing the erroneous identity Ye-166 and three red stars to signify the world records set by its sister ship, the Ye-152-1.[1]

Ye-166
Fictitious designation of the Ye-152-1 used when registering the world records with the Federation Aeronautique Internationale (FAI). Also applied to the Ye-152M displayed at Monino as an intelligence ruse.[1]

MiG-23
An erroneous designation applied by western intelligence observers to the Ye-152A after the display at Tushino in 1961.[1]

Development of the Urugan-5 automatic weapon system was initiated by the Council of Ministers in 1955 to intercept supersonic bombers flying at 10-25,000m ( ft) altitude at 1600–2000 km/hour up to 100–120 km range from the interceptor base, (with sufficient warning). The system relied on ground based radar to guide the interceptor to an intercept with the target and aircraft based radar and weapon aiming systems to complete the mission using the following components:[4]

A high resolution ground based radar system, to provide accurate position and height data at a range of 345 km.

A combination of delays in development of the electronic components, missiles and poor reliability of the Tumansky R-15 engines for the aircraft component led to the Urugan-5 system, fitted to Ye-150 derivatives being cancelled in 1962.[4]