Mike Wallace (born March 10, 1959) is a NASCAR race car driver born in Fenton, Missouri. He currently drives the #01 Chevrolet for JD Motorsports in the Nationwide Series. He is a younger brother to Rusty Wallace, older brother to Kenny Wallace, and uncle to Steve Wallace. His daughter, Chrissy Wallace, and son, Matt Wallace, are also pursuing their own racing careers, with Chrissy racing 5 races in NASCAR's Craftsman Truck Series in 2008, and 5 races in ARCA RE/MAX Series.

Wallace made his Nationwide Series debut in 1990 at the season-closing Winston Classic at Martinsville Speedway. Starting twenty-fourth, Wallace finished sixth in the #40 Lowes Foods Chevrolet. The next season, he ran nine Busch races for a variety of different teams, and had a third-place finish at Lanier Raceway. He also made his Winston Cup debut at the Pyroil 500, where he finished 31st in the Jimmy Means-owned car. It also marked the first time since the 1950s that three brothers competed against each other in a Winston Cup race, as Rusty and Kenny drove in that race also.

In 1992, Wallace signed on with Moroso Racing to pilot the #20 First Ade Oldsmobile. They also ran a Cup race together at Atlanta Motor Speedway, where Wallace finished thirty-third. Despite a tenth-place run at Martinsville, Wallace was dismissed from the ride nearly half-way into the season. Late in the year, he was hired by Barry Owen to drive his #9 Oldsmobile. After a ninth-place finish in their first race at Dover International Speedway, Wallace posted a second-place finish at Martinsville. Wallace and Owen also ran a pair of Cup races, their best finish a 20th at Atlanta. They ran the entire Busch schedule in 1993, with sponsorship from FDP Brakes. Wallace had nine top-tens that season finished a career-high 12th in the final points standings. He also finished in the top-fifteen in the first time in his Cup career when he finished fifteenth at Atlanta.

Early in 1994, Wallace was hired by Junie Donlavey to drive his #90 Heilig-Meyers Ford Thunderbird in the Winston Cup Series. Although he competed in twenty-two of the scheduled thirty-one races that year, Wallace finished fifth in the Rookie of the Year standings, and thirty-third in the overall championship standings. His season was capped off with a fifth-place finish at the Hooters 500. In the Busch Series, he won his first career race at Dover, followed by victories at The Milwaukee Mile and Indianapolis Raceway Park. The following season, Wallace failed to qualify for five races in the Cup series, and dropped a spot in the standings. His lone lead-lap finish came at Bristol Motor Speedway, where he finished 8th. In the Busch Series, his team switched to #90 with sponsorship from Duron Paints, and posted two second-place finishes. He also made his Craftsman Truck Series debut that season at North Wilkesboro Speedway, and finished 29th in the MB Motorsports truck.

Twelve races into the 1996 season, Wallace was released from his Cup ride with Donlavey. Despite moving back down into the Busch Series full-time, Wallace only posted one top-ten in the second-half of the season, forcing Owen's team to close its doors. Wallace began 1997 with high hopes in the #91 LJ Racing Chevrolet Monte Carlo owned by Joe Falk and Ron Neal. The team had moved up from the Busch Series and signed Spam as a full time sponsor but after many DNQ's and a best finish of seventeenth at Texas Motor Speedway, the team lost its sponsor and Wallace found himself without a ride. He also split time in the Busch Series in the #7 Chevrolet for Ed Whitaker, making six starts. Midway through the season, he left for the Truck series, driving the #52 Purolator Chevrolet Silverado for Ken Schrader Racing. Despite only running fifteen races that season, he finished twenty-third in points. He also finished in the top-ten in each of the last four races of the season, including California Speedway, where he finished second.

Wallace returned to run the Truck Series full-time in 1998 for Schrader. Although he did not win that season, he won his first career NASCAR pole at New Hampshire International Speedway and had eleven top-tens en route to a thirteenth-place points finish. He also ran six Busch races for Andy Petree Racing, Washington-Erving Motorsports, and the Curb Agajanian Performance Group, his best finish coming at IRP for Petree. In addition, he ran the Daytona 500 in an entry for Phil Barkdoll, starting and finishing 23rd.

In 1999, he left Schrader to drive the #2 Team ASE Racing Ford F-150 for Ultra Motorsports. He won in his first race for Ultra at Homestead-Miami Speedway, and won again six races later at Pikes Peak International Raceway. He finished sixth in points that year. He also returned to Donlavey in Cup to run the Daytona 500 for him, and finished 23rd, as well finishing 24th in an Ultra-owned car at Richmond International Raceway. The following year, Wallace won an additional two truck races and moved up to fourth in points. He also ran eight Busch races for Moy Racing, his best finish a 14th at IRP.

After Ultra purchased the Mattei Motorsports #7 Nations Rent Cup team, Wallace was announced as the driver for 2001. Despite starting off the season with a sixth-place finish at the Daytona 500, the team struggled in qualifying, almost costing Wallace his job before he posted two consecutive top-ten finishes. During that time, he began running with a new Busch Series team, Biagi Brothers Racing, running their #4 Geico Chevy. His best finish of eight starts was a tenth at Richmond International Raceway. Late in the season, Wallace was granted his release from Ultra, and joined Penske-Kranefuss Racing, driving the #12 Mobil 1 Ford Taurus as a teammate to his brother Rusty. At Phoenix, he led 45 laps late in the race before giving the lead up to Jeff Burton, finishing a career-best second place. Unfortunately, Penske decided not to keep the 12 team going, forcing Wallace out of a ride (Penske did keep the number 12 for Ryan Newman's team the following year, replacing the 02 Newman had used in a few races in '01). He began the season driving for Andy Petree for a pair of races, before financial problems caused that team to cease operations. He returned to run with Biagi for seventeen races in the Busch Series, posting two consecutive fourteenth-place finishes. Wallace also returned to the Truck series driving the Federated Auto Parts truck for Schrader, posting two top-tens. Mid-season, he signed onto the #14 Conseco Pontiac Grand Prix for A.J. Foyt Racing, his best finish a tenth at Bristol.

In 2003, Biagi Bros. began racing full-time in the Busch Series with Wallace. Despite missing two races, Wallace had three top-tens and finished 13th in the final standings. In the Cup series, he had two top-tens driving for Phoenix, as well as making eight starts filling for Jerry Nadeau in the #01 U.S. Army Pontiac Grand Prix for MB2/MBV Motorsports. In addition to running two races for Schrader in the Truck Series, he also competed in a pair of events for Brevak Racing, his best finish fifteenth at Phoenix. In 2004, at the mid-season race at Daytona, Wallace took the lead on the last lap and won his fourth career race, the first for Biagi in one of the biggest wins of his career. The following week at Chicagoland Speedway, he led eighteen laps and almost won before running out of fuel on the final lap. In the Cup Series, he drove three races for Arnold Motorsports, before leading 45 laps and finishing seventh at Richmond for Phoenix. He finished the season driving the #4 Lucas Oil Chevy for Morgan-McClure Motorsports. 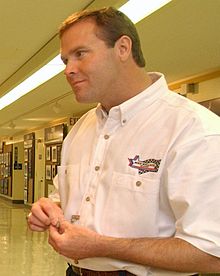 Wallace at the Pentagon

Wallace began driving for MMM full-time in 2005. Despite an eighth-place finish at the Pepsi 400, Wallace was released towards the end of the season by MMM. He returned to the Truck Series briefly for Darrell Waltrip Motorsports, finishing in the top-nine twice. He drove for a variety of different teams in the Busch Series, among them Akins Motorsports, Rusty Wallace, Inc. and Evernham Motorsports, with whom he finished second at his hometown track in Gateway.

He began 2006 in the Truck Series running for HT Motorsports, but was released after finishing 31st in each of his first two starts. Already signed on to run Phoenix's Cup car, Miccosukee Resorts Dodge signed Wallace to be their full-time driver for the remainder of 2006 to replace Jason Keller, and had three top-five finishes. In 2007, Wallace piloted the #7 GEICO Chevrolet for Phoenix Racing with teammate J. J. Yeley. Despite no top-ten finishes, he ended the season eleventh in points.

In 2008, Wallace, GEICO, and his car number moved from Phoenix Racing to Germain Racing, where he drove a Toyota Camry. He had eight top-tens and finished a career best eight in points. After he did not renew his contract with Germain, Wallace attempted the 2009 Daytona 500 for Kevin Buckler, but failed to make the race by just one position in his Gatorade Duel qualifying race. In June 2009, Larry Gunselman tapped Wallace for a ride in his #64 Toyota to compete in Pocono just days after Todd Bodine left the team. On October 31, 2009 in the Mountain Dew 250 he raced the No. 48 for Fast Track Racing Enterprises in the Camping World Truck Series along with his daughter Chrissy Wallace. It was the first time that a father and daughter raced in the same race. Mike finished 28th after an accident and Chrissy finished 13th. He also signed on as a full-time driver of the #01 JD Motorsports in the Nationwide Series.

Mike Wallace attempted the Daytona 500 in the #92 car for Brian Keselowski, but failed to qualify. He will also attempt the #92 car in the NASCAR Sprint All Star Race.

Wallace led late in the 2011 Aaron's 312 but flipped in a multi-car accident. Wallace drove the car back to pit road and was credited with an 18th place finish.

Near the end of the 2011 season, Mike Wallace won the NCWTS Coca-Cola 250 at Talladega Superspeedway after being pushed by Ron Hornaday for the majority of the race.