McLaughlin grew up in New York State and began his professional career at a later stage than most other drivers, competing in his first race at age 20 in a dirt modified he built. He then ran regularly at his home track, Maple Grove Speedway, before moving up into the DIRT Modified series.

McLaughlin lived a few blocks from Maple Grove Speedway and built his first car in the garage at home. According to his mother, he drove the car to the track on his first night of racing.

In 1984, McLaughlin made his Busch Series debut at the Mello Yello 300 at Charlotte Motor Speedway, driving the #73 Pontiac home to a 14th place finish. He ran one more race that season, the October Charlotte race. Unfortunately, mechanical problems ended his day early. He raced twice more the next season, posting an eleventh place run.

He then advanced into the NASCAR Modified ranks for Sherwood Racing, owned by Bill Corazzo and run by Clyde McLeod. His crew included Corazzo's nephew, Greg Zipadelli, who would later win Sprint Cup titles as crew chief, and Greg's younger brother Scott Zipadelli, who is also now a top level NASCAR crew chief. Mike won the 1988 championship in the Winston Modified Tour, now known as the Whelen Modified Tour. He has sixteen career wins in the modified series.

He also drove for Harry and Mike Greci in the Busch North Series, finishing 3rd in points in 1993. Mike became the first driver ever to win both ends of the Modified/Busch North doubleheader at New Hampshire Motor Speedway.

In 1990, Mike returned to the Busch Series, driving the #51 Coors Extra Gold Oldsmobile in six races. Despite two wrecks, McLaughlin had two top-five finishes and caught the eye of many in the sport. He ran eight races the following season, but was unable to duplicate his success. After part-time runs in 1992 and 1993, McLaughlin finally ran his first full-time schedule in the Busch Series in 1994, driving the #34 Fiddle Faddle Chevrolet for Cicci-Welliver Racing. Despite not making two races, McLaughlin posted three top-fives and finished 13th in points. He also ran two Winston Cup races for Cicci-Welliver that year, finishing 22nd and 27th at New Hampshire and Watkins Glen, respectively.

In 1995, McLaughlin got his first taste of Victory Lane, winning the GM Goodwrench/Delco 200 at Dover, and collected 13 additional top-tens on his way to a third place points run. After a winless 1996, McLaughlin won twice in 1997 (including at his hometrack at Watkins Glen) and was named the series' Most Popular Driver. 1998 saw him add Goulds Pumps as his primary sponsor, and he won two more races, and matched his career-best finish of third in points.

After going winless in 1999, McLaughlin shockingly announced he would depart from Cicci-Welliver at the season's end, citing a need for a change. He and Goulds left for the #48 Chevy fielded by Innovative Motorsports in 2000. Unfortunately, the season was a struggle and McLaughlin could not get the cars up to speed. Despite two fifth-place finishes, McLaughlin jumped ship just weeks before the start of the 2001 season to the unsponsored #20 owned by Joe Gibbs Racing. McLaughlin shocked the NASCAR world by winning the NASCAR Subway 300 at Talladega, albeit controversially. Despite the win, the team could not continue to run unsponsored, and McLaughlin moved over to the MBNA #18 for the remainder of the season. He finished seventh in points.

Struggles and retirement from driving

In 2002, McLaughlin went winless once again, but was able to muster a fourth-place finish in points. However, Gibbs wanted to move his son Coy into the #18, and McLaughlin was forced to find a new job. In October 2002, McLaughlin announced he would run with a new team, Angela's Motorsports in the 2003 season. The team showed up at that season's Speedweeks, and their Ford Taurus was the fastest in testing. After that, problems began arising, and weeks before the season started, Angela's Motorsports closed its doors. It turned out that the team's owners had been behind in paying their bills, and their debtors took over the operation and shut everything down. McLaughlin appeared to be out of a job, but after word leaked out, fans began donating money to allow McLaughlin to run the Daytona race, and with sponsorship from XM Radio and with Darrell Waltrip's DWStore.com, McLaughlin drove the #39 Ford at the season-opening event, qualifying 4th but finishing 29th after a wreck in the closing laps. The financial windfall could not get McLaughlin a full-time ride, although he returned to Cicci Racing to run seven races, posting one top-ten finish. McLaughlin went unemployed in 2004 until the end of the season, when he replaced Bobby Hamilton, Jr. at Team Rensi Motorsports after Hamilton left to join Nextel Cup team PPI Racing, posting a second place run at the Stacker 200 Presented by YJ Stinger. 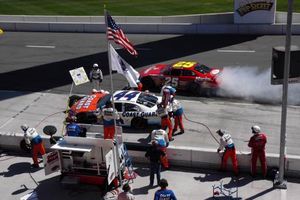 McLaughlin smokes his tires while leaving the pits in his #25 car during the 2004 California race.

Mike became a test driver and development driver coach for Joe Gibbs Racing, and opened his own racing fabrication business. As of 2009, Mike is also building bobsleds for the Bo-Dyn project, supplier of sleds to the US Olympic team.