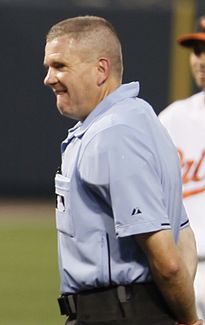 Everitt worked the 2003 National League Championship Series and was the left field umpire during Game 6, in which Chicago Cubs fan Steve Bartman arguably prevented Cubs left fielder Moises Alou from catching a foul pop up hit by Florida Marlins second baseman Luis Castillo. Everitt ruled that the ball would have landed in the stands without Bartman's interference, and therefore Castillo was not out. The Marlins proceeded to score 8 runs and win Game 6, 8-3.

During Game 4 of the 2009 World Series, between the New York Yankees and the Philadelphia Phillies, Pedro Feliz hit a two-out single with Ryan Howard on second. There was a play at the plate and replay shows that Howard clearly - barely but clearly - missed home. However, the ball rolled away from Yankee catcher, Jorge Posada and CC Sabathia, backing up the play, threw to second to try to get Feliz going to second. It was at that point that Mike Everitt signaled Howard was safe at the plate, the correct ruling. Howard had not touched home, but had not been tagged out either: there was no call to make until Sabathia tried to make a play on Feliz, therefore losing the right to appeal that Howard missed home. For this excellent call, Everitt got no recognition, only complaints that he blew the call because Howard missed home.