The Mignet HM.14 Flying Flea (Pou du Ciel literally "Louse of the Sky" in French) is a single-seat light aircraft first flown in 1933, designed for amateur construction. It was the first of a family of aircraft collectively known as Flying Fleas.

The HM.14 was designed by French radio engineer Henri Mignet. It was the result of his ambition to design a safe aeroplane that could be built quickly and cheaply by any amateur familiar with simple woodwork and metalwork skills. It followed a progressive series of designs, of which the HM.8 monoplane was already successful as an amateur-built aircraft. On 10 September 1933, at the Bois de Bouleaux near Soissons, Mignet piloted the first flight of the HM.14. In the following months, he made many flights with progressive modifications to improve its handling and performance, totalling 10 hours test-flying time. He described the HM.14 as his Pou no.4, presumably counting from the HM.11, that featured a large pivoting flap between the fixed front and rear wings. The prototype HM.14 had a wingspan of 6 m (20 ft). It was powered by an Aubier et Dunne 540 cc three-cylinder two-stroke motorcycle engine, producing about 17 hp (13 kW) at 4,000 rpm. The engine was connected to the propeller shaft via a chain drive with a 2.5:1 reduction ratio. Subsequent examples were built with many optional engine and wingspan variations.[1]

In September 1934, the French aeronautical magazine Les Ailes published Mignet's article Le Pou du Ciel, in which he described the HM.14. In November 1934, he published his book Le Sport de l'Air that gave all the dimensioned details of materials, plus descriptions and techniques, to enable readers to construct and fly their own HM.14s without further specialist help. In September 1935, the Air League published an English translation of Le Sport de l'Air, and it was also serialised in the October, November and December 1935 issues of the magazine Newnes' Practical Mechanics.[1]

The HM.14 is most commonly described as a tandem wing aircraft, although the main wing overlaps the rear wing in the basic design, so it almost qualifies as a highly-staggered biplane without horizontal tail. Construction of the airframe employs mostly birch plywood sheet, spruce laths, steel tubing, steel cables, proprietary metal fittings and fixings, adhesives, and linen fabric.[1]

Unlike conventional aircraft, the HM.14 has no ailerons or elevators, and no foot-operated flight controls. The flight control system comprises a conventional control stick. Fore-and-aft movement of the stick is transmitted via cables to the rear underside of the main wing, that is supported by a single pivot at the front underside, mounted on a pylon on the fuselage. Rearward movement of the stick pulls the cables, and increases the pitch and therefore the lift of the main wing. The aircraft will then pitch up, due to the centre of pressure being forward of the center of gravity. Forward stick movement has the reverse effect. Resistance to stick movement is usually an aerodynamic force from the main wing, but there is also a rubber spring (bungee) pulling down on the leading edge of the wing, and a telescopic strut behind the pilot's head limits the total wing movement. Side-to-side movement of the stick controls the all-moving rudder via cables. In flight, this produces a stable rolling motion, as required in a banked turn, because the wings both have dihedral. That rolling characteristic is not safely available during take-off or landing, so crosswinds are not easily tolerated.[1][2]

On 14 July 1935, at Heston Aerodrome, Stephen Appleby piloted the first flight of his HM.14 (G-ADMH), the first to fly in the UK. On 24 July 1935, the Air Ministry awarded it the first ever Authorisation to Fly document, being equivalent to a UK Certificate of Airworthiness with additional conditions and limitations. Following a forced landing, it was repaired with modifications designed by L.E. Baynes, at the factory of Abbott-Baynes Sailplanes. The modifications included a new 6 metres (20 ft) span front wing with a repositioned wing pivot, a partial engine cowling, and a low-mounted radiator for the existing water-cooled Carden-Ford engine. The aircraft was later converted to replace the wing control cables with twin "push-rods". Following the publicity of the aircraft and those personalities, many British HM.14s under construction acquired similar features. In April 1936, Baynes made improvements to the Flying Flea design, similar to those on Appleby's HM.14, plus further major modifications. Those included a 6.7 metres (22 ft) newly-designed front wing with two outboard wing pivots, that eliminated wing-bracing wires, hence the name Baynes Cantilever Pou. The prototype of that (G-AEGD), plus a later example (G-AEJD), were extensively test-flown and demonstrated by Appleby.[3][2][5]

In the UK, variations of the HM.14 were made by about 200 serious amateurs. A handful of companies also hoped to produce kits and completed HM.14s, including Abbott-Baynes Aircraft, Dart Aircraft, F. Hills & Son, Luton Aircraft, E.G. Perman and Company, and Puttnam Aircraft Company. Up to the start of World War II in September 1939, UK Authorisations to Fly were issued to 76 HM.14s, while registrations were issued for a further 45 projected examples.[1]

By March 1936, Algerian and Swiss authorities had banned the flying of HM.14s, and the French Air Ministry stepped up its actions from cautionary notices to flight testing by the French Air Force, that resulted in an inconclusive published report. In June 1936, the French Minister for Air stopped all Flea flights in France, pending full-size wind tunnel tests at Chalais-Meudon. In July 1936, the published report described how pitch-up control could be lost in a shallow nose-down attitude, because the pivoting front wing reduced the separation from the rear wing (the "slot effect"), so that the aircraft could not be recovered from a dive into the ground. The effect was worsened if the centre of gravity had not been correctly calculated and adjusted. Mignet responded with several design changes, such as pivoting rear wing, different aerofoil contours on both wings, elimination of the overlap between the wings, and an adjustable fore-and-aft wing pivot location relative to the fuselage. In late 1936, those features, together with rigid wing control struts ("push-rods"), were embodied in an updated edition of his book Le Sport de l'Air. In August 1936, the Royal Aircraft Establishment started full-size wind tunnel tests using HM.14 G-AEFV. In October 1936, the report was published, confirming the French test findings. The Air Ministry then stopped renewing the Authorisation to Fly documents of all HM.14-related aircraft that had not received approved modifications. After World War II, no HM.14s were granted UK Authorisations to Fly, although several further examples were built.[1] 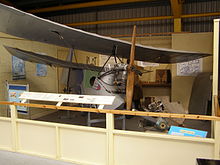 HM.14 at the Newark Air Museum 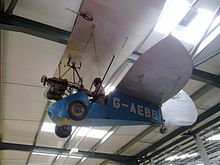 HM.14 at the Shuttleworth Collection

HM.14 at the National Air and Space Museum 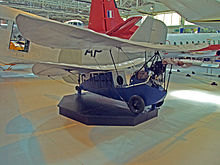