Might and Magic VIII: Day of the Destroyer is a computer role-playing game developed for Microsoft Windows by New World Computing and released in 2000 by the 3DO Company. It is the eighth game in the Might and Magic series. The game received middling critical reviews, a first for the series, with several critics citing the game's length and its increasingly dated game engine, which had been left fundamentally unaltered since Might and Magic VI: The Mandate of Heaven in 1998.[3] The character development system, spells, sound effects, many of the sprites, and even some gameplay tasks - including an Arcomage quest - were for the most part recycled from earlier games, with little or non-notable tweaking.

Might and Magic VIII is based on the Might and Magic VI game engine, and many of its elements are strongly similar to the previous two titles in the series. Unlike the previous two games, however, Might and Magic VIII introduces a new party management system that allows all but one of the five possible player characters to be hired, dismissed or re-hired at any time during gameplay. The character class system used in the previous two games has similarly been overhauled, with only the cleric and knight classes remaining. The experience, spells, levelling and skill system present in both previous Might and Magic titles is retained, with only minor updates. In place of the traditional class system, Might and Magic VIII features non-archetypical playable races. Aside from human knights, clerics and necromancers, available classes include minotaurs, dragons, vampires, dark elves, and trolls, each of whom possesses traits unique to their particular race. As with its two predecessors, the game world is divided into fourteen "regions", including five elemental planes, each of which contains a varying mix of explorable towns, dungeons and wildernesses. Enemies are fought in either real-time or turn-based combat, depending on the player's preference.

In typical Might and Magic fashion, the game is fairly non-linear, so quests can be completed at the player's own leisure, though the completion of storyline quests is essential for progression. Dialog, lore and exploration are important to progression in the game, with some dungeons involving relevant puzzles. In addition, side quests and dungeons can warrant rewards if completed, but are not vital to the main storyline. Also, promotion quests can increase the capabilities of particular classes of character.

Like Might and Magic VII, the game includes a system of choices which affect fundamental aspects of gameplay. Throughout the course of the storyline, the player is given opportunities to side with either dragons or dragon hunters, and either sun priests or necromancers. This choice is permanent and affects several quests, NPC reactions and available recruitable characters. However, unlike its prequel, the game's ending sequence is not affected by the outcome of these choices.

A servant of the Ancients, the planeswalker Escaton, arrives in the village of Ravenshore on the continent of Jadame. Approaching the center of town, he summons a giant crystal which unleashes an elemental storm across the continent. There is widespread destruction and the boundaries to the four Elemental Planes are breached. Now elementals and monsters from beyond the boundaries are threatening to invade, fulfilling Escaton's plan to draw the powers of the elements toward the crystal and destroy the world, and the player must assemble a party of heroes to prevent this. 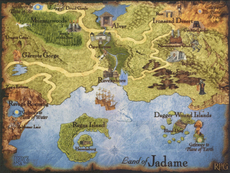 A map of the continent of Jadame, showing the regions and towns explored in the game.

The continent of Jadame is first introduced in this game, previously unmentioned in the series. The four elemental gateways appear in the four corners of Jadame: the Gateway of Earth on one of the Dagger Wound Islands (southeast), the Gateway of Water in Ravage Roaming (southwest), the Gateway of Air in the Murmurwoods (northwest), and the Gateway of Fire in the Ironsand Desert (northeast). In each case they cause an environmental disaster: a volcano in the Dagger Wound Island chain erupts and the tremors destroy the bridges that link the islands, the minotaur undercity in Ravage Roaming is flooded, the trees in a large area of the Murmurwoods are uprooted by the winds, and much of the troll settlement in Ironsand is destroyed by an explosion of fire. Escaton raised an enormous crystal in the centre of the city of Ravenshore, which acts as the portal to the Plane Between Planes, where the Destroyer resides.

The first character created by the player remains with the party for the entire game and is referred to as the "Acknowledged Champion of Jadame". This character leads the party through the adventures in the game.

Might and Magic VIII was released to a universally average reception, and was generally regarded as surprisingly inferior to previous titles in the series, though still a passable game. IGN praised the game's rendered cutscenes, storyline, setting and background along with its overall consistency and expansion on the Might and Magic universe, noting these as particularly strong points, but was disappointed with in-game graphics and the reused engine's low modern capabilities, citing these as pitiful compared to other, more modern RPGs.[9]

This was echoed by GameSpot's reviewer, who, though intrigued by the series' addictive charm, was displeased with Might and Magic VIII's tedious interface and pointed out the imbalance of the dragon character class.[3] Game Revolution's reviewer was dissatisfied with the plot, particularly in comparison to earlier titles, and felt the game was identical to both its prequels.[10] The Game Rankings reviewer felt that the size of the game world and the large amount of Might and Magic background and storyline contained in the game were good points, though was unhappy with the game overall, feeling that glitches and increasingly poor graphics left it uninnovative, while asserting that there were better, more up-to-date RPGs available at the time.[11]

User ratings for the game were generally more favorable, though still regarded Might and Magic VIII as a weak entry in the series.[12][13][14][15]

In Japan, the game was ported by Imagineer for the PlayStation 2 under the title Might and Magic: Day of the Destroyer (マイト アンド マジック デイ･オブ･ザ･デストロイヤー?). The game has just a few minor changes. Before this port, the last game in the main series to appear on a console was Might and Magic III: Isles of Terra, almost ten years previously.