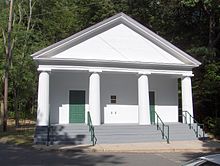 Greek Revival architecture is a general term. It emerged following the War of 1812 and while a revolutionary war in Greece attracted America's interest. It was perhaps the first architectural fashion movement in the United States which was meant to explicitly reject previous English traditions such as Adamesque style. Greek Revival architecture was popularized by Minard Lafever's pattern books: The Young Builders' General Instructor in 1829, the Modern Builders' Guide in 1833, The Beauties of Modern Architecture in 1835, and The Architectural Instructor in 1850.

Greek Revival includes high-style and more vernacular versions such as the 1839 Simsbury Townhouse built by an unknown craftsman.[2] 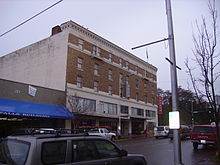 Mission/Spanish Revival is an amalgam of two distinct styles popular in different eras, the first - Mission Revival architecture and the second - Spanish Colonial Revival architecture. The combined term, as well as the individual terms, is often used in classification of buildings listed on the U.S. National Register of Historic Places.[1]

"American Movements" is a phrase used also in visual arts of the United States to refer to U.S.-centered or -originated movements such as Pop Art, and such as in the art of Edward Hopper and Norman Rockwell. (Note: Hopper and Rockwell themselves portrayed various architectural styles in their paintings of small-town and urban America.)

Bungalow/Craftsman is a term commonly appearing in National Register listings, which reflects American Craftsman styling and Bungalow building type. Craftsman style, depending on one's definition, may apply only to decorative arts of furniture and other objects while not to building architecture. Nonetheless, many thousands of craftsman-styled California Bungalow houses nation-wide have been built. When listed on the National Register, they usually receive the "Bungalow/Craftsman" classification.

There are many hundreds of National Register-listed buildings of this type.[1]

It may be a subtype of Commercial style, i.e. it may be a predecessor of the full Chicago school style architecture.[citation needed]

"Octagon Mode" architecture refers to Octagon houses built in a particular style. The term is used in at least 49 NRHP listings.

"Postmedieval English" architecture is a style term used for a number of NRHP listings, including William Ward Jr. House in Middlefield, Connecticut.

The complete list of architectural style codes in NRIS is as follows:[1]